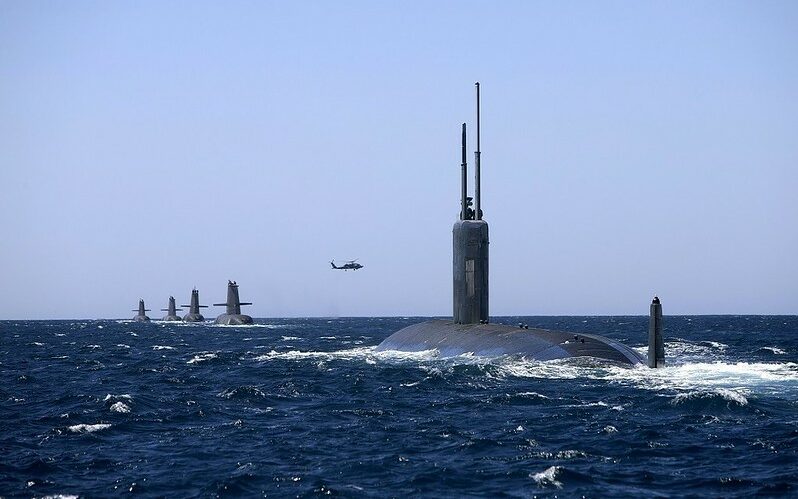 Although it will be Australia’s biggest military purchase, the submarine deal is mired in strategic uncertainties.

The Morrison government’s announcement in September of a new set of military agreements between Australia, the United States and the United Kingdom was a surprising, retrograde and risky step.

For many Australians, the idea of the UK being of any serious strategic importance to Australia, more than 60 years after that country withdrew from its military positions “east of Suez”, was a step back in time to the formation of the Australian state as part of the British empire in 1901.

Just as Australians are slowly beginning to recognise the realities of their location in Asia, a deepened alliance with the US and a post-Brexit reboot of the UK have put the “Anglo” back in the racialised identity that makes up the Anglosphere.

The most well-known aspect of AUKUS is the agreement with the US and the UK to supply Australia with nuclear-powered submarines — or more precisely, with nuclear propulsion technology. While much is unclear about this proposal and much about it problematic in terms of weakening the nuclear non-proliferation regime and exacerbating the strategic arms race in Asia, what is clear is that the decision will have major strategic consequences for Australia, and from the perspective of China potentially existential consequences.

The prelude to AUKUS — by just a matter of minutes — was the cancellation of a 2016 Australian contract with a French government-owned shipbuilder for eight French conventional diesel/electric-powered submarines, expected to be worth more than $100 billion. Under AUKUS, the US will allow the export to Australia of naval nuclear power technology, either directly or by licence through the UK (with the latter making up an Australian and US subsidy to post-Brexit Britain).

Almost everything else about the submarines — what type they will be, what their operational capabilities will be, which country will build them, and when they will be delivered — is to be decided following a review to be completed in 2023. Effectively, the AUKUS submarine decision amounts to a $100 billion blank cheque.

Nothing is known about the next Australian submarine except for one fact: nuclear propulsion. Nuclear naval reactors are, the Australian government has stated, required for long-range, long-endurance, high-speed-capability operations in waters distant from Australia’s immediate neighbourhood.

The two most important questions to ask about any major weapons system platform concern its primary strategic purpose: what strategic need is it intended to meet, and what are the strategic consequences of that acquisition? In the case of what will become the largest Australian military purchase ever, the answers to these basic strategic questions are deeply troubling, and both involve China.

Whether based on the US Virginia class hunter-killer submarines or the UK’s troubled Astute class attack submarines or some new design, the vessels will be more than double the tonnage of both Australia’s current submarines and their now-abandoned French replacements.

The very long range and great size of the likely US or UK nuclear submarines means they are not principally designed for operations in Australian or South-East Asian waters — the traditional and understandable defence concern for Australian naval planners. For the most part, large, fast nuclear-powered submarines are not the most appropriate choice for the relatively shallow waters of most of littoral South-East Asia and the waters north and north-east of Australia.

Australia’s prospective nuclear-powered submarines will in fact be primarily designed for operations in distant waters working in concert with the US Navy in two key types of operations against China.

One mission will be to join US hunter-killer submarines in protecting US-led aircraft carrier taskforces attacking Chinese air, naval and ground targets from the Pacific or the South China Sea. Since 1945 the US has been able to move on to the offensive with impunity by bringing its carrier taskforces in range of mainland Asian targets.

In the past, there was little China could do to respond. Now, with Chinese coastal defences significantly improved, the US will have to proceed more cautiously, hopefully protected against Chinese submarines by a phalanx of US and coalition anti-submarine warfare assets, including hunter-killer submarines. Australia is offering to make a marginal contribution to such an attack on the Chinese homeland.

The second, even more serious mission involves a marginal Australian contribution to an even more dangerous attack on Chinese military capabilities in time of war: hunting, in concert with US attack submarines, Chinese nuclear ballistic missile submarines that make up the core of its survivable nuclear deterrent force.

China’s hope is that its nuclear ballistic missile submarines hiding in the deeper parts of the South China Sea or in the abyssal trenches of the western Pacific will be hard for the US and its allies to find and destroy. In contrast, China’s land-based missiles are highly vulnerable to a US nuclear first strike and to interception by US missile defence systems. China hopes that even with that vulnerability to a US first strike, its nuclear missile submarines would provide the basis of a retaliatory second strike — and thereby deter the US from any nuclear attack on China.

Whatever one’s doubts and objections over the validity of deterrence theory generally, there can be little doubt that China, like the US, takes the deterrence of nuclear attack by the possession of nuclear weapons that can survive a surprise attack very seriously. Australia cannot hope to evade enduring Chinese enmity from such considered and direct assistance to an attempt to make China profoundly vulnerable to US nuclear attack.

There are of course a number of other important strategic uncertainties and concerns involved in this decision. Planning for long-range Australian submarine missions against Chinese targets assumes unimpeded passage through the waters of countries to Australia’s north – an assumption that in itself indicates Australian arrogance and disregard for its neighbours in the South-East Asia nuclear weapon free zone.

Moreover, a number of senior Australian defence experts and former senior officials see the plan as driven by domestic political and alliance management considerations rather than by careful and balanced assessment of Australia’s primary strategic defence needs. Others such as Hugh White see the program as hopelessly unrealistic in terms of budget and defence procurement capability, and doubt Australia will in fact acquire the promised submarines.

Apart from the likely prohibitive costs and the politics-driven wrangling about which country and company will build what where, US and UK nuclear-powered submarines are as a matter of policy fuelled for their lifetimes by highly enriched uranium (over 90 per cent enriched). This is concerning for three further strategic reasons.

First, Australia has no civil technology base to maintain and operate nuclear power plants of any kind, let alone naval nuclear reactors for sub-surface combat conditions.

Second, as Monique Cormier and Trevor Findlay have argued cogently, while export of naval nuclear reactors is not prohibited under the Non-Proliferation Treaty and IAEA safeguards, the planned export of highly enriched uranium to power the submarine reactors undermines the spirit of nuclear non-proliferation embodied in the South Pacific and South-East Asian nuclear weapon free zones embraced by all of Australia’s neighbours.

And third, since previous requests to the US for the same nuclear propulsion technology by Asian allies more important to the US than Australia such as South Korea have been refused, this US policy will be diplomatically unsustainable. The inevitable result will be an escalating naval arms race in East and South-East Asia – a development that in itself works against the enduring defence interests of all concerned.