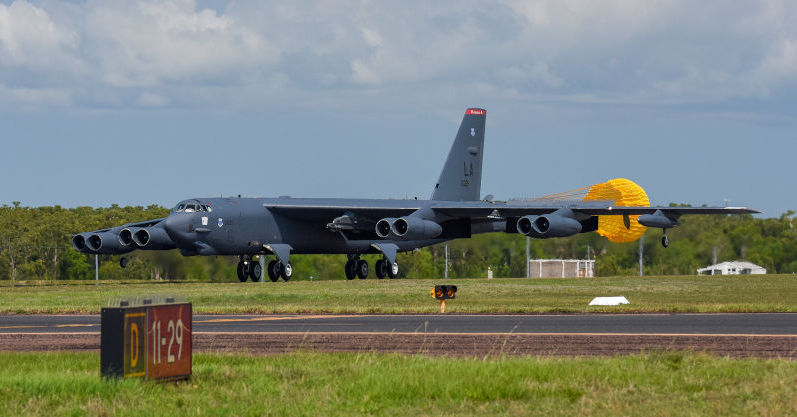 It’s difficult to avoid the conclusion that Australia is not just complicit in, but committed to, America’s nuclear war planning.

Hints that this was the case were buried in the fine print of the AUKUS deal, but the controversy over the nuclear submarines sucked up most of the oxygen around the agreement. Without public debate it seems that Australia has meekly and comprehensively, and without ceremony or scrutiny, handed the war decision to the US.

Allowing B-52 bombers to be based at RAAF Tindal has escaped any serious media or parliamentary examination of the role they might play in a crisis in the South China Sea. Australians have not been informed about the concept of operations for these nuclear-armed aircraft or what their roles would be in a crisis. The relevance of their capabilities and their range are apparently beyond the media capacity to enquire about from politicians.

The B-52s are American long range, subsonic, strategic bombers that can carry both very significant conventional and nuclear armaments. The B-52s have gone through many iterations and upgrades since they were introduced into service in the 1950s. The current version has a combat range of around 14,200 kilometres and a cruising speed of roughly 1,000 kph.

The B-52s can carry approximately 31,500 kg of mixed ordnance, including bombs, smart weapons, mines and air-launched cruise missiles. In a conventional conflict, the B-52H can undertake air interdiction, offensive counter-air and maritime operations. They can perform anti-ship and mine-laying operations. But, their nuclear warfare capability is the most obvious reason for their deployment to Australia.

B-52s are capable of employing the AGM-86B with a W80 thermonuclear warhead, with yields up to 150 kilotons. In addition, the US Air Force has this year successfully tested the AGM-183 ARRW hypersonic air-to-ground glide missile from B-52s. The combination of missile defence suppression ability and long range nuclear armed cruise missiles make them a formidable asset in a nuclear conflict.

To conduct effective maritime operations the B-52s would have to launch before the conflict began given the 3 to 4 hour transit time required to get to the South China Sea/Taiwan Straits. This would seriously limit their tactical value for conventional operations. More likely, the B-52s’ role is as part of a second strike response once the conflict has gone nuclear.

That means the B-52s would need to be launched before things went nuclear in a crisis to avoid being caught on the ground in a preemptive strike. The survivability of second strike assets is critical in nuclear war planning. Presumably an adversary intending to go nuclear would plan on preemptively taking out the B-52s at Tindal by ballistic or by air or submarine launched missiles. A corollary of this is that Australia must have already given pre-approval for the B-52s to launch as this is the only basis on which the Americans would see sense in basing the aircraft at RAAF Tindal.

What is astounding is the complete failure of the Albanese government to explain the benefits and risks to Australia from simply continuing with the previous government’s disastrous strategic decisions. Bipartisanship in defence muffles debate rather than producing effective public discussion of Australia’s plans. The B-52s are part of the US’s nuclear capability. The government must know this. It must know that in the event of an East Asian crisis Australia automatically becomes a target, and possibly a nuclear one.

How did Australia come to this? And why?