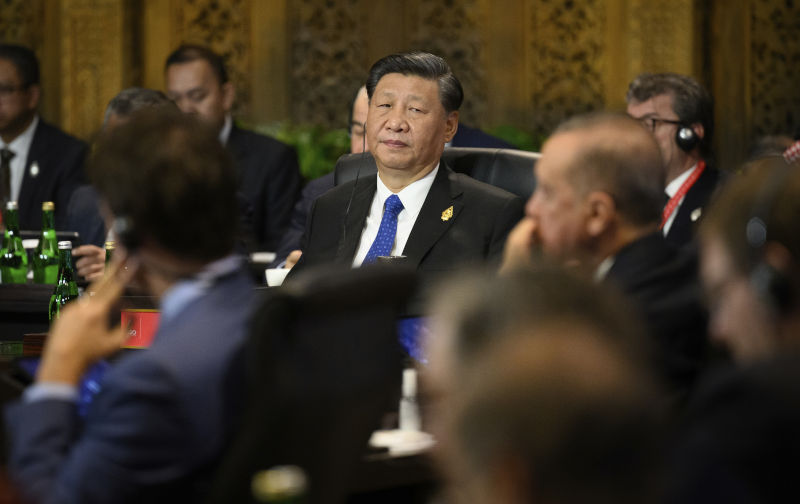 Above a picture of a tired looking Xi Jinping – taken at the G20 – the Sydney Morning Herald ran the headline: The Face of Capitulation. It was as banal as it was predictable. It was for a Peter Hartcher story that crowed at having slayed the dragon (sub-text: this was Hartcher’s personal victory).

After having been among the earliest promoters of the China Threat and having kept banging gongs and cymbals for the past five years to keep it alive, the Herald could hardly have said anything else as the Albanese Government decisively changed course in the management of Australia’s relationship with China.

It has been building since the change of government in May. Foreign Minister Penny Wong has maintained a consistent disciplined pragmatic position. Astutely, she spoke – and Albanese still does – of stabilising the relationship not improving it. This position highlights that it had been badly managed by the previous government, otherwise there would be nothing to be stabilised, and holds out the prospect of improvement once stabilised.

The key formula repeated by the Prime Minister is that ‘we will work together where we can, and disagree when we must’, but that the emphasis should always be on continued dialogue. It is a measure of how far the previous government’s management of this most important bilateral relationship had gone off the rails, championed by a barking press pack led by the SMH, that such common sense is somehow seen as remarkable statesmanship.

On China’s side, its new ambassador to Australia, Xiao Qian, was sent to Canberra with a brief to normalise the bilateral relationship. He has been open and public about this, but also has consistently made the point that it must be reciprocal and was at times disappointed at the lack interest shown by official Australia.

Infamously, Morrison when PM refused a request to meet with him for an introductory call, something that is normal courteous diplomatic practice. Common courtesy is something alien to the previous PM. But it was not enough to breach normal protocol, the PM’s team had to gleefully background the Australian media to ensure the ambassador’s humiliation was complete.

With the change of government, the Ambassador would have been closely observing not only the change in rhetoric from the Foreign Minister, but that Cabinet maintained discipline around the key themes of ‘stabilisation’ and ‘dialogue’. Nothing of substance changed on either side, but in diplomacy language, attitude, and posture matter greatly.

Sometimes it is important what is not said. Former House Speaker Nancy Pelosi’s visit to Taiwan was as provocative as it was reckless. The Australian Government’s response was to say as little as possible, other than sensibly to urge restraint. It worked. It kept Australia well aligned with its regional neighbours, except Japan, and did nothing to inflame further the situation.

It is all too easy to imagine the overblown, careless, bellicose language if the Coalition had still been in office. Dutton as Defence Minister may have emptied the bars and restaurants around Wooloomooloo to establish a lonely presence near the Taiwan Straits. The Australian Government’s position would have been well noted by Beijing. It may have been decisive in tipping the scales in favour of a meeting between Xi and Albanese in Bali.

Beijing understands well that the four trade measures which were imposed after Morrison’s unilateral call for an international inquiry into the origins of Covid 19 are a major political obstacle for any Australian Government wishing to move forward with the bilateral relationship.

The measures should never have been imposed. It was an unforced own goal. They have served simply to harden Australian attitudes against China and resolve to resist and oppose China rather than seek diplomatic solutions to differences. Apart from some individual industries and firms, the macroeconomic impact has been negligible. Now that they exist, the challenge is how to remove them without loss of face by China.

To get around this impasse, it has been the Australian Government that has shifted ground and China has responded positively. Until Bali, the government’s position has been that there could be no improvement in bilateral relations until the four trade measures were removed. This had been an entirely reasonable stance and one that was necessary for domestic politics.

The change was to shift the discussion from the trade measures to the importance of dialogue in the interests of stabilising relations. Albanese then made ‘no pre-conditions’ for a meeting into a virtue, rather than it being a capitulation on Australia’s side. It was a masterful political stroke. China conceded nothing other than to end the freeze on bilateral high-level political and diplomatic contact. China had imposed the freeze, then removed the freeze, while the four trade measures remain in place. Hardly the stuff of capitulation!

The great symbolic value of the meeting was that it was the definitive end to the freeze in the bilateral relationship. Xi Jinping even reverted, according to the PM’s media briefing, to his old script of his deep affection for Australia, the value placed on Australia as a developed-country partner in the Asia Pacific, his visits to Australia and especially his interest in Tasmania. This message will now permeate down through the entire Chinese bureaucracy.

In effect, the freeze had ended before the Bali summit. Penny Wong had met or spoken with Wang Yi on three occasions. Defence Minister Marles met his counterpart, and there has been a telephone call between the respective Trade Ministers. But in China’s super-heirarchical system of government, it is only when the leaders meet that change will follow. Australia has once again received the leader’s imprimatur.

Things should become easier to manage in the relationship from here, although Albanese was careful to reiterate that much needed to be done and progress would be in small incremental steps. Here again he was damping expectations of quick results, but this is as much about political management than a realistic assessment of what might be achieved. As ever in politics – and diplomacy – it is always far better to under promise and over deliver. Albanese has also been careful to stress that we have many differences which will need to be managed carefully, but he has expressed full confidence in diplomacy to do so.

Former Prime Minister Malcolm Turnbull accuses Hugh White and myself of arguing that all countries need to recognise the reality of China’s power, influence and military capacity. Then he elides flaccidly to say we suggest Australia should merely ‘kiss the ring’. This is of course to ignore policy recommendations we have both made separately over the years on how to advance Australia’s interests in a multi-poplar world order in which China is one of the dominant powers.

Turnbull’s response when he had the chance in government was to glue Australia to America’s hip, even when a Trump administration was running the show. Turnbull has close-up experience in ring kissing. On reflection, it may be incorrect to say that Turnbull glued Australia to the US’s hip. It may well have been another part the US’s anatomy.

So apart from ring kissing, what is to be done?

A useful start would be for the PM to accept an invitation to the Chinese Ambassador’s residence for dinner to follow up on the summit. This is normal diplomatic practice. Apart from goodwill it provides the opportunity for the PM to reinforce key messages he made to Xi and clarify points of misunderstanding from the conversation that may arise from translation or just the time pressures of the meeting.

The trade measures China has imposed against Australia remain the biggest obstacle to moving the relationship back to normal. These must be removed but of course Beijing will not want to lose face. In other cases where China has imposed economic measures as part of its statecraft (‘coercion’ when China does it, ‘sanctions’ when we do it) it has often just quietly let these restrictions ease until they disappear; Norwegian salmon for example after dissident author Liu Xiaobo was awarded the 2010 Noble Peace Prize.

I have proposed how this might done, at least in the case of the two items – wine and barely – which are in dispute in the WTO. Australia and China could agree to end the cases and let trade return to pre-existing levels. Australia could claim victory that it had restored the trade, China could likewise do so by saying Australia had dropped its case. A win-win result. When first raised DFAT threw a wet blanket over the idea, but now the settings have changed the pressure is on to move the relationship forward. Trade Minister Farrell seems to have picked up on this. Customs clearance measures on coal and lobsters could just be left to melt away in the reflected glow of the leaders’ meeting.

Penny Wong should visit China as soon as some progress on the trade measures has been achieved. Ideally it would be to re-start the Strategic and Economic Dialogue which has been suspended for years. Following on from this, a raft of energised activities in the educational, research, and cultural spaces could follow.

Apart from malicious elements in the media, it is important to ensure that the government bureaucracy is fully aligned and understands the government has changed Australia’s position on China. Dialogue and engagement are the objectives, conflict and hostility are not. Yet on the day of the summit, the ADF backgrounded journalists that over a month ago a Chinese naval ship reportedly had monitored a RAN vessel conducting joint exercises with the US and Japan navies in ‘international waters’ in the South China Sea. On the face of it, this looks like interference in Australian foreign policy by the ADF. The Minister needs to get on top and hold his department accountable. He is still to make any public statement on this.

Stephen FitzGerald wrote in these pages this week that Albo may have had a Whitlam moment when meeting Xi, when Gough first went to China. As unexpected as this may seem, it is a measure of the extent to which relations had not only deteriorated, but to which the Fear of the Other was allowed to determine Australian policy and community attitudes. Australia’s Chinese community no longer needs to feel outsiders. Still, much remains to be done at both the level of high politics and community relations.

If there is to be one loser from this week, it is the China Threat industry in Australia.

First published in Pearls and Irritations on Nov 19, 2022