Best of 2022: Last week, a NSW court jailed me for 15 months for a peaceful climate protest. Hear my story 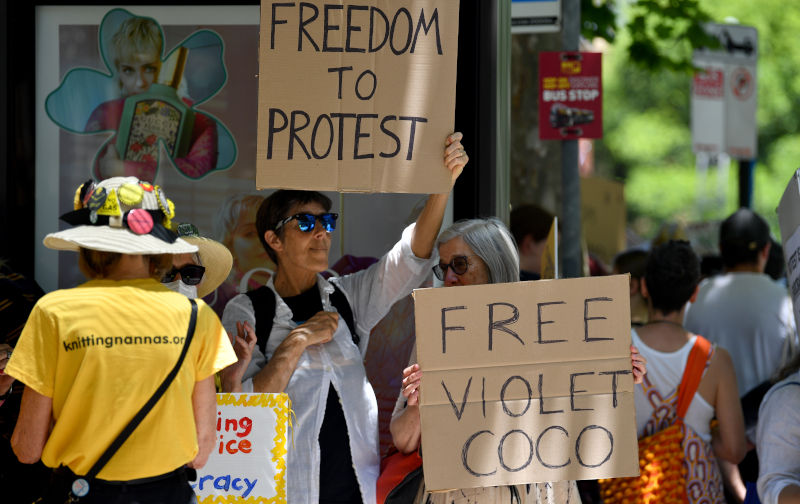 If you are reading this, then I have been sentenced to prison for peaceful environmental protest. I do not want to break the law. But when regular political procedure has proven incapable of enacting justice, it falls to ordinary people taking a stand to bring about change.

On the 14th of April, I stopped a truck on the Harbour Bridge with my firefighter friend to draw attention to the Climate and Ecological Emergency, and the fact that our firefighters do not have the tools they need to protect us.

I am a native of Sydney and Newcastle. Growing up, like most of my generation, I dreamed of a varied and colourful life enjoying the world, its people and its treasures. For most of my life I pursued those dreams. I owned my own small business, went to study management and philosophy at university, ran community theatre groups and helped my sister in raising her baby son.

Then, in 2018, I became fully aware, for the first time, that according to current mainstream scientific research, our entire planet is in the midst of a crisis. This crisis – the climate and ecological crisis I only vaguely learned about in school – is soon to drive extinction events, food shortages, sea level rise and extreme weather, threatening every aspect of life as we understand it. The science calls for immediate emergency action to avert or mitigate these consequences, but political leaders and fossil fuel corporations around the globe have either ignored or actively worsened the problem.

When I understood the truth of this fact, I became profoundly afraid for the future of our lives on this planet. I feared for the lives of all the children alive today, the lives of my nephews – the lives of the children I want to bear. I became determined to help avert this crisis with everything that is available to me as an ordinary citizen, and I have spent the last four years devoted to this aim.

In 2021, I spoke personally with esteemed climate scientist and academic, Professor Will Steffen, who told me this: “Massive floods, fires and heatwaves are sending us a clear message. On our present trajectory, we risk heading into a collapse of our globalised civilisation and a precipitous drop in human population — put simply, hell on earth. But we can avoid this disastrous future if we change the way we think, live our lives and interact with the rest of the living world.”

In light of the urgency of the situation, I feel I have to do the most effective thing in bringing about political change. History has shown that at times of great crisis, when regular political procedure has proven incapable of enacting justice, it falls to ordinary people taking a stand to bring about change through civil disobedience. Civil disobedience in the form of strikes, blockades, marches and occupations have played a crucial role in the development of democracy, and helped to secure precious rights here and around the world – including women’s suffrage, 8-hour working days, racial legal equality and environmental protections.

Likewise, my philosophical studies have shown me that protesting is an important part of democracy – called direct democracy. Liberal political philosopher John Rawls asserted that a healthy democracy must have room for this kind of action. Especially in the face of such a threat as billions of lives lost and possibly the collapse of our liveable planet.

But make no mistake – I do not want to be protesting. Protest work is not fun – it’s stressful, resource-intensive, scary and the police are violent. They refuse to feed me, refused to give me toilet paper and have threatened me with sexual violence. I spent three days in the remand centre, which is a disgusting place full of sad people. I do not enjoy breaking the law. I wish that there was another way to address this issue with the gravitas that it deserves.

The second largest petition to the Australian parliament in our history was to declare a climate emergency with 370,000 signatures (Noyes, 2019). A majority of Australians want stronger action on climate (O’Malley & Perkins, 2021), yet our elected representatives fail to represent us. Even when there is a landslide election of climate independents, new coal mines are being approved, and the government gives $22,000 a minute of our tax to the fossil fuel industry (Pizzirani, 2022).

I respect the law and do not want to break the law, however community leaders have pointed out that it is time to protest, as all other channels have failed to have this situation taken seriously. Leaders like Greg Mullins, who was the NSW Fire and Rescue Commissioner for 39 years, says, “We need to be noisy, naughty Australians – the government only listens to the squeaky wheel.” (The Climate Council, 2021). In the same vein, Christiana Figueres, who was the Executive Secretary of the United Nations Framework Convention on Climate – she says, “Civil disobedience is not only a moral choice, it is also the most powerful way of shaping world politics. It’s time to participate in non-violent political movements wherever possible.” (McMahon, 2020)

Even David Attenborough says, “We can not be radical enough.” (Guardian News, 2019, 0:31:00). In fact, the Stanford Social Innovation Review released an article with research that expressed that protest movements, like Extinction Rebellion or Fireproof Australia, are more effective than NGO’s at causing social change (Ozden 2022). This fact is not surprising to me, since, I reiterate, protest movements are historically responsible for women getting the vote, removing segregation of black people and white people, the eight hour working day, and many more social and political rights that we cherish and celebrate here in Australia.

The confluence of these factors – the urgency of the situation, the historical role of civil disobedience and the calls of community and global leaders – is what led to me deciding to engage in non-violent protest actions this year.

I spent three days in a cell in the remand centre. Then upon signing bail I was under 24 hour curfew conditions for 20 days in a small apartment with no garden. After 20 days effectively under house arrest, my curfew hours changed – at first I could leave the house for only 5 hours a day for the following 58 days, then 6 hours a day under house arrest for the following 68 days.

This totalled 2017 hours imprisoned in my home for non-violent political engagement in the prevention of many deaths. Cumulatively, that is 84 days or 12 weeks of my freedom.

Now I am in prison, for engaging in democracy. Please donate to help me with my appeal of these unjust laws.

Here is what the Human Rights Watch has to say, “Human Rights Watch has found that authorities in the Australian state of New South Wales (NSW) are disproportionately punishing climate protesters in violation of their basic rights to peaceful protest. Their research has shown that magistrates in NSW have been imposing harsh penalties and bail conditions on climate protesters that violate basic rights.

The United Nations Human Rights Committee, in its General Comment on the right to peaceful assembly, stated that “Where criminal or administrative sanctions are imposed on organisers of or participants in a peaceful assembly for their unlawful conduct, such sanctions must be proportionate, non-discriminatory in nature and must not be based on ambiguous or over broadly defined offences, or suppress conduct protected under” international law.

The Australian authorities’ crackdown on climate protesters is an alarming new trend. Citizens who protest and violate the law can face appropriate punishment, but the punishment should not be intended to prevent all protesters from exercising their fundamental right to protest.

Climate action will mean more people peacefully taking to the streets, not fewer, and the authorities should accept that.

As the United Nations Secretary General Antonio Guterres said on April 5 this year, “Climate activists are sometimes depicted as dangerous radicals. But the truly dangerous radicals are the countries that are increasing the production of fossil fuels. Investing in new fossil fuels infrastructure is moral and economic madness”.

You can read the original version of this statement and donate to Violet’s legal fund here.
https://chuffed.org/project/95028-get-violet-out-of-prison

Readers may also be interested in our recent articles:

‘Strike Force Guard’: suppression of climate protest threatens us all

First published in Pearls and Irritations on December 6, 2022