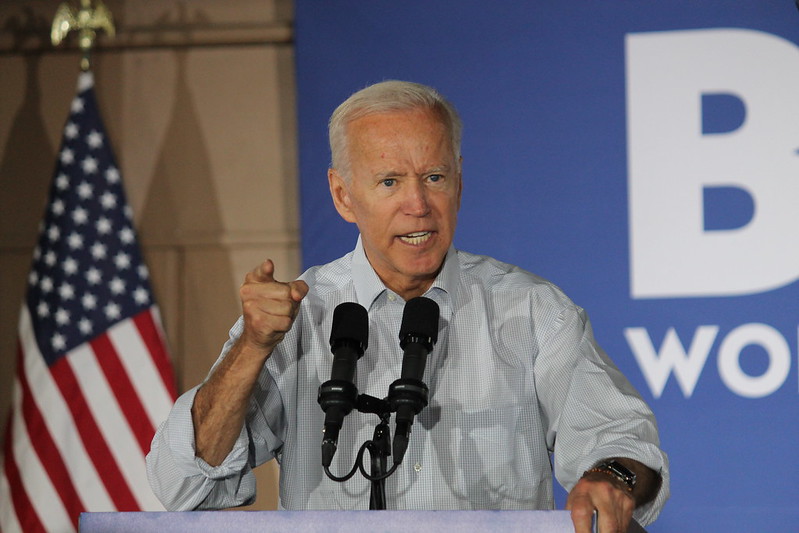 There is much in Biden’s strategic thinking that all sides of the Australian political scene need to consider very closely given the way the current government has hitched Australia’s future to the US in a changing and challenging world. (Image: Flickr / Matt Johnson)

After a year in preparation, President Biden has eventually issued his Indo Pacific Strategy (IPS) which seeks to present a comprehensive US approach to the region linked back to his pre-election vision of a foreign policy for “middle America”.

Though it covers a wider canvas, this has become the centrepiece of Biden’s China policy. Understanding it is vitally important to Australian national interests . But it received scant attention in an our media preoccupied with the rapidly deteriorating situation in the Ukraine and the Coalition’s frenzied khaki election campaign.

As the product of intensive word-smithing by the White House, any analysis of the IPS must focus not only on what it actually says but equally on how it is said and what it does not say. A comment first on geography. The IPS very loosely defines the region as “stretching from our Pacific coastline to the Indian Ocean” without specifying its western limits. Clearly it  encompasses India – which it sees as a “leader” in South Asia . Does it stretch to the east coast of Africa – as APEC does to Chile ? or even beyond to Pakistan ( where IndoPacom ends) -arguably no less potentially volatile than the Sino/Indian border ? And what about Mauritius and Diego Garcia where things are simmering again? A very untidy arrangement.

A continuing theme through the IPS is an acknowledgement that for too long “much of the world have viewed Asia too narrowly- as an arena of geopolitical competition” . Flowing from which “ the alliances, organizations and rules that the US and our partners have helped to build must be adapted: where needed, we must update them together.” It calls for a “latticework” of strong and mutually reinforcing coalitions. In listing its regional treaty alliances it includes the Philippines and Thailand (both almost dormant) – though not New Zealand or any reference to ANZUS per se. Incidentally nor was there any reference to the Five Eyes intelligence arrangements.

As for the Quad, it calls for strengthening cooperation on global health, climate change, infrastructure, cyber, education and clean energy but plays down security issues. This likely reflecting the forceful Indian Foreign Minister’s denial, recently in Melbourne of any connection between the Quad and the Ukraine – confirming the importance India still attaches to its Russian connection.

It notes  that  the AUKUS  “partnership” “will identify the optimal pathway to deliver nuclear powered submarines to the RAN at the earliest achievable date..(and) deepen cooperation and enhance interoperability through a concrete program of work on advanced capabilities including cyber, AI, quantum technologies and undersea capabilities”.

The IPS accepts that the US has to up its game in the region “in part” (not only!) because the region faces “mounting challenges” from China. Its carefully crafted and moderate wording on China  – is in direct contrast to the bordering on inflammatory outbursts recently by Morrison and Dutton. The Chinese Communist Party does not rate a mention.

“We will strengthen the international system, keep it grounded in shared values, and update it to meet 21st century challenges. Our objective is not to change the PRC but to shape the strategic environment in which it operates, building a balance in the world that is maximally favorable to the US, our allies and partners and the interests and values we share. We will also seek to manage competition with the PRC responsibly. “

The IPS provides the overall strategic umbrella for the Pacific Deterrence Initiative (PDI) and the Maritime Security Initiative (in South East Asia) to “reinforce deterrence” (against China) throughout the region. Note also a new piece of military jargon which has crept into the 2022 PDI is “pacing challenge” presumably to replace “competition”! A new component is the expansion of US Coast Guard assistance and cooperation with countries in Southeast and South Asia and the South Pacific.

The emphasis on “driving new resources” into the region is especially notable with an expansion of US diplomatic presence  and an intensification  of assistance in climate, health and development work – as well as in people-to-people contacts including through the Peace Corps. The announcement of an embassy in the Solomons has followed quickly. That probably has much to do with countering the Chinese response to the recent internal problems there following the Solomons Government’s switching recognition to the PRC from Taiwean.

The major new initiative is the “Indo-Pacific Economic Framework” which the US plans “to lead”. Space here does not allow coverage of the chequered history of  the Trans Pacific Partnership (TTP) launched with fanfare by President Obama and rejected by President Trump and to which Australia was an early signatory. Biden has not been attracted to the TPP and the US has been  quietly engaged in direct negotiations with China on their massive bilateral trade agenda. Meanwhile, China has sought to join the reconstituted TPP posing some major potential issues for us. Now the US says it will launch early this year “ a new partnership that will promote and facilitate high-standards trade, govern the digital economy, improve supply-chain resiliency and security, catalyse investment in high-standards infrastructure and build digital connectivity”! It defines “high-standards” as “high labor and environmental standards” and the clear implication is that it wants to change the rules to prevent China joining – though India and others might find the bar too high too.

There are a few other points worth noting :

. “strengthen an empowered and unified ASEAN” : It makes the now familiar bow to ASEAN “centrality” and commits to a new level of contacts with the organisation. But the objective of a unified ASEAN may not reflect a deep understanding  of its history and the complex dynamics at work in that organisation.

.similarly it commits to build a strategic partnership with India “to support its continued rise and regional leadership in promoting stability in South Asia” though makes no specific mention of the South Asian Association for Regional Cooperation. China has made inroads into all South Asian countries except India The Modi government’s treatment of India’s substantial Muslim population and the tribal communities in its northeast complicate its regional “leadership” credentials.

. it also makes a special point of trying to improve the bilateral relations between Korea and Japan which currently at a very low ebb. Again an area of long held sensitivity over centuries and especially the Japanese colonial past in which the US (and Australia)  will need to tread very carefully especially to avoid charges of interventionism.

.another omission is any reference to the US removing – or even diminishing – exceptionalism as a basic tenet of its foreign policy. In this regional context a decision to join UNCLOS or accept ICJ jurisdiction would have strengthened considerably the moral basis for the strong stand the US has been taking in the South China Sea.

There is much in Biden’s strategic thinking that all sides of the Australian political scene need to consider very closely given the way the current government has hitched Australia’s future to the US in a changing and challenging world. All the more now with the emerging developments in the Ukraine and Europe. Our political leaders must  pay more attention not only to what they are saying on international issues but on how they are saying it. Short term “attack dog” campaigns with little concern for  collateral damage poses longer term potentially serious consequences for the broad national interest.