BOB CARR. Australians have no interest in joining U.S. cold war against China

I had just been appointed foreign minister and was consulting my predecessors. Downer implied cold war was not smart diplomacy and not in Australia’s interest.

But in its biggest policy shift on China since 1971, that is precisely what the US has embarked upon.

On October 4, US Vice-President Mike Pence threatened China with the biggest military build-up since Ronald Reagan, and pledged to choke its economy. He was fulfilling President Donald Trump’s vow that China would be stopped from getting “bigger than us”.

Now America will set about recruiting allies for a “coalition of the willing”to hit China with adversarial policies.

If I were the political officer in the US embassy in Canberra, I would be drafting a cable telling Washington that Australia was unlikely to join. I would quote the Lowy Institute poll from June this year that showed 82 per cent of Australians think China is “more of an economic partner” than a “military threat”. The poll also showed 43 per cent of these funny Aussies have confidence in President Xi Jinping “to do the right thing regarding world affairs”, but only 30 per cent in Trump.

With 850 million being added to the Chinese middle class between 2012 and 2030,Australia has a huge stake in China’s continuing success. We want its new middle class to visit supermarkets to fill their trolleys with Australian lamb and cheese. Or to order beef direct from our farms and wine from our vineyards.

If China’s urbanisation carries on, it will continue to suck in our raw materials and keep our mines prosperous. It will provide most of our tourists and fee-paying students.

Why would anyone conclude it’s remotely in our interests to block China from completing the trajectory it’s on — the same development path that Singapore and South Korea completed — which in this case entails becoming 70 per cent middle class in a mere 11 more years?

It was John Howard who coined the formula: “The rise of China has been good for China and good for the world.” He spoke for a continuum of Coalition pragmatism on China that stretches back to Malcolm Fraser becoming prime minister in 1975 and seeking to recruit China as an ally against the Soviet Union. It embraces Scott Morrison’s speech to the Chinese community two weeks ago that has won the praise of a clutch of former Australian ambassadors.

In June 2014, Hillary Clinton had warned Australia against becoming too dependent on the Chinese market. Malcolm Turnbull, then communications minister, had responded with bemusement, saying: “I’m sure that we’d love to export vast quantities of iron ore to the United States but they’ve never shown any enthusiasm in buying them.”

In 2014 Barack Obama, captured by China panic, had phoned then prime minister Tony Abbott to tell him not to join the proposed Asian Infrastructure Investment Bank being sponsored by China. After a courteous delay, Abbott ticked off Australian membership.

In both cases Australia had been unruffled by US anti-China agitation.

That’s not just on economics.

No, said Downer in 2004, the ANZUS Treaty would not pull Australia into a war with China over the Taiwan Strait.

No, said Abbott’s defence minister David Johnston in 2014, in response to the same question about the East China Sea.

On July 24 this year, Julie Bishop was almost eloquent in spelling out that Australia would not run freedom-of-navigation patrols in the South China Sea. It was a polite rebuff to three US admirals who had suggested we should. And she delivered the message in the US, on the eve of annual talks with its secretaries of state and defence.

Pragmatism on China is a stronger Coalition tradition than the short-lived ideological line that captured policymaking through 2017 and was relegated and reversed this year by Turnbull just before he was removed.

Australia’s capacity to say no to the Trump-Pence cold war will be easy given the stand of other US allies in Asia. Japan, pursuing rapprochement with China, will not be joining in. Nor will South Korea or The Philippines. Indian Prime Minister Narendra Modi made it clear during his summit this year with Xi that India would run its own bilateral with China without deferring to its US partner. Singapore, like other Asian states, harbours the deepest doubts about US reliability and since October last year has run its own robust ‐bilateral with Beijing.

That leaves the Europeans who, to be sure, have many grievances against China over economic access but are likely to be satisfied by China’s concessions.

Therein lies China’s big challenge. Chinese who want their own government to deliver more “reform and opening up” hope that their leaders respond to Trump by doing just that: more rule of law, more markets, more foreign investment.

How Xi Jinping responds to US cold war mobilisation will test whether he is ideologue or statesman.

Relations Institute at the University of Technology Sydney. 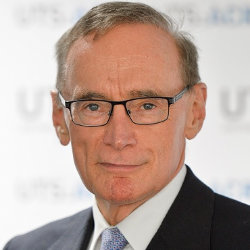