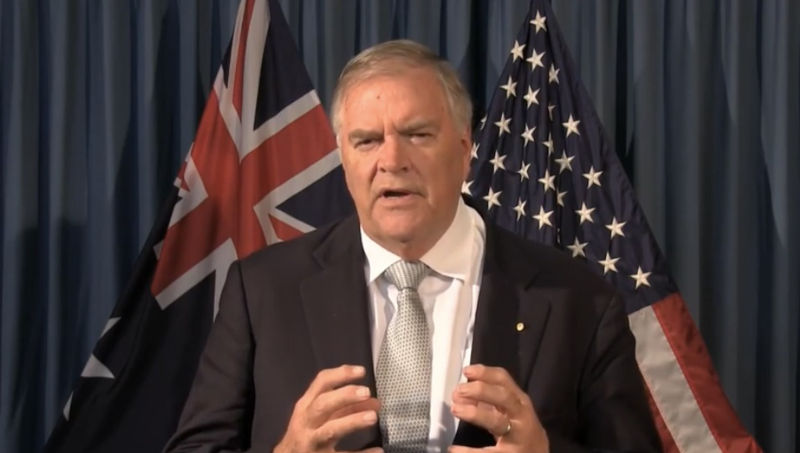 There is a never-ending conga line of politicians, intelligence, military and defence officials quick-stepping through revolving doorways onto the boards of lucrative military weapons companies.

Kim Beazley, former WA governor, ex Labor defence minister, two-time federal opposition leader, and former ambassador to the USA, was known, because of his enthusiasm for all things military, as ‘Bomber Beazley’ during his Defence ministership.

Just two months after his vice-regal role ended on 30 June this year, he joined the board of defence contractor Luerssen Australia. The move is another example in the long list of Australia’s revolving door appointments in the military-industrial sector.

In 2018 the federal government awarded Luerssen Australia, the WA-based subsidiary of the German naval shipbuilder Lürssen, a contract to supply twelve Offshore Patrol Vessels to the navy. The $3.7 billion contract was one of 28 projects listed as a concern in October by new defence minister Richard Marles, and was said to be running a year behind schedule.

In February this year, Beazley, then WA state governor, made an official visit to Luerssen at Civmec’s facility in the Australian Marine Complex at Henderson, 35 kilometres south of Perth, where the remaining ten vessels are planned to be built.

The Morrison Government invested around $1.5 billion in infrastructure at both the marine complex at Henderson and at Fleet Base West at HMAS Stirling. Just across the waters of Cockburn Sound from Henderson, Stirling, Australia’s largest naval base, has long been coveted by the US military as an Indian Ocean base for its nuclear submarines and other naval ships.

Photos and a story of Beazley’s visit to Henderson were posted on the WA Government House website, including his description of the Luerssen vessel as ‘the ship of the future’.

The Government House webpage says the Luerssen executives updated the Governor on the offshore patrol vessel program and that discussion then turned to ‘the possibilities of relocating further defence industry works to Western Australia to bolster our sovereign shipbuilding capabilities’. No further details are provided.

There is a wider context that raises questions about what was discussed at this meeting, which took place less than three weeks before the federal election and just four months before Beazley joined Luerssen’s board. In response to a request from Declassified Australia for more details, Beazley said only that, “Discussions centred on the subject on the website”, the subject being the sentence quoted above.

What is Lürssen seeking?

The possibility of a multinational naval shipbuilder relocating potentially billions of dollars of additional works to Henderson is significant. It could become more so if reports in international media of potential consolidation in the German naval shipbuilding industry, including speculation about a possible merger between ThyssenKrupp Marine Systems (TKMS) and Lürssen, prove accurate. TKMS is the large naval shipbuilding subsidiary of German industrial giant ThyssenKrupp. It was one of the three firms shortlisted for Australia’s ill-fated submarine contract, losing out to France’s Naval Group.

Lürssen launched its new NVL Group entity, which Wagner leads, in October 2021 to house its naval shipbuilding businesses, separating them from its super yacht division, a move that indicates it may be positioning itself for future industry consolidation.

In November, executives from TKMS were in Canberra seeking meetings with Australian Navy officials to discuss a potential new shipbuilding project, which the Financial Review said could lead to the Navy scrapping the offshore patrol vessels and replacing them with more heavily armed corvettes.

This may be significant because Lürssen and TKMS are already working in partnership (also see here) supplying the German navy with corvettes. No formal Australian corvette project yet exists, but it’s reported that it is being considered as an option by the Albanese government’s Defence Strategic Review.

Beazley’s term as WA Governor ended on 30 June 2022. Luerssen Australia announced his appointment to its board on 30 August 2022.

Beazley has joined the former chief of navy, Christopher Ritchie, and former Howard government cabinet minister John Sharp on the Luerssen Australia board. Both Ritchie and Sharp have also accepted other board positions with foreign arms manufacturers.

Sharp was with European group Airbus, a significant federal defence contractor, from 2002–2015, prior to joining Luerssen in 2017. Ritchie was a director of Lockheed Martin Australia, local subsidiary of the world’s largest arms manufacturer, from 2013–2020, adding the Luerssen board in 2017.

Ritchie is also chair of the AMDA Foundation, curiously a registered charity, that organises arms industry expos around Australia for local and international defence officials, military representatives, and arms corporations to network and do business.

The Luerssen board appointment is not Beazley’s first move through the revolving door. After returning from Washington DC, where he had been ambassador from 2010 to 2016, he joined Chris Ritchie on the board of Lockheed Martin Australia.

Around this time, Beazley was appointed as co-chairman of the Australian American Leadership Dialogue, a Director and Distinguished Fellow at the Perth USAsia Centre, and president of the Australian Institute for International Affairs

Beazley was also appointed a Distinguished Fellow at the Australian Strategic Policy Institute (ASPI), for whom he wrote and spoke regularly. ASPI is designed to be the federal government’s ‘independent’ primary source of external advice on defence and national security matters, though there are serious questions over its independence, as shown previously by Declassified Australia.

Beazley left Lockheed’s board in April 2018 ahead of taking up the WA governorship. Since resigning as governor, he has taken up the role of chairperson of the Australian War Memorial, which has been sponsored by weapons manufacturers Lockheed Martin, Thales, BAE, and Boeing.

Two months after the Turnbull government signed the offshore patrol vessel contract with Luerssen Australia in late January 2018, WA Labor Premier Mark McGowan visited Lürssen’s Bremen headquarters in Germany. There he discussed the program and Western Australia’s potential as a base for defence exports into the Asia-Pacific region.

Within days of returning to Australia, McGowan announced Kim Beazley’s appointment as governor. “[He is] a great West Australian, a great advocate for our state, someone respected across the political divide, someone that can represent our state overseas… someone that can represent us interstate and be an advocate for WA in a unique way.” Beazley commenced in the vice-regal role on May 1.

The following year, Governor Beazley undertook his first official visit, to the United Kingdom and Germany, from 25 March–2 April 2019. While in Germany, his official engagements included a site visit to the Lürssen corporation. Beazley and WA Government House both declined to respond to Declassified Australia about the purpose of this visit.

While in London, in addition to meeting with Queen Elizabeth II, some of Governor Beazley’s engagements were specifically defence industry related. He met with Sir Roger Carr, the chair of BAE Systems, the UK’s and Europe’s largest arms manufacturer, and sixth largest globally. He made a site visit to Airbus, a global top 15 arms multinational, which has established a drone launch site in WA. He also gave a keynote address to a gathering at the King’s College London’s Menzies Australia Institute event, Contemporary thinking in Australian defence policy.

Expanding the role of governor into ‘strategic’ advocacy

In May 2019, WA Today reported that Governor Beazley had won an additional $1.4 million in the McGowan government’s 2019 Budget. The budget on page 85 revealed that the extra funding covered the new Governor’s ‘expanded role of advocacy and representation’.

WA Treasurer Ben Wyatt told Perth radio the budget increase was because the Governor would help attract a bigger share of Australia’s defence industry to WA in addition to performing his job under the constitution, the report said. It quoted Wyatt:

As a result of that, that’s why three extra staff have been allocated to the Governor.

This is unique, there’s no question about that in respect of roles the Governor has traditionally played. But, because we’re very fortunate to have a Governor that has quite a global background… we want to attract more jobs.

Premier McGowan said the inclusion of advocacy by Beazley had ‘modernised’ the role of governor.

The ‘revolving door’ is a term used to describe the movement of individuals from public roles into related private industry roles and vice versa. Such moves are not illegal and not necessarily problematic. Declassified Australia is not alleging any illegal activity by Kim Beazley. However, given the potential for undue influence and conflicts of interest, global integrity bodies recommend clear guidelines and a transparent process of scrutiny and approval before such appointments take place.

Unfortunately, Australia’s guidelines for managing revolving door appointments are weak and largely unenforced. It is also unclear whether they exist for certain positions, such as state governors.

In 2018, the Grattan Institute produced a report – Who’s in the room? – which notes that Australia is vulnerable to policy capture by vested interests and that a key risk factor is Australia’s “lax revolving door rules [which] permit ‘cosiness’ between politicians and influence-seekers”.

Reasonable minimum cooling-off periods (12-18 months) should be adopted by governments to mitigate the risk of conflicts of interest. They should accompany a comprehensive, transparent and formal assessment procedure which assesses whether post-public office employment is compatible with former duties.

In response to Declassified Australia’s questions, Kim Beazley said: “Whilst Governor I visited many industries involved in Defence in Western Australia and industries in other sectors. All were aimed at encouraging investment in WA. With none of them at any stage did I discuss a role with them after my time as Governor.”

Luerssen Australia declined to respond to questions, instead pointing to its August media release announcing Beazley’s appointment to its board.