Boozing it up in Geneva by Big Alcohol 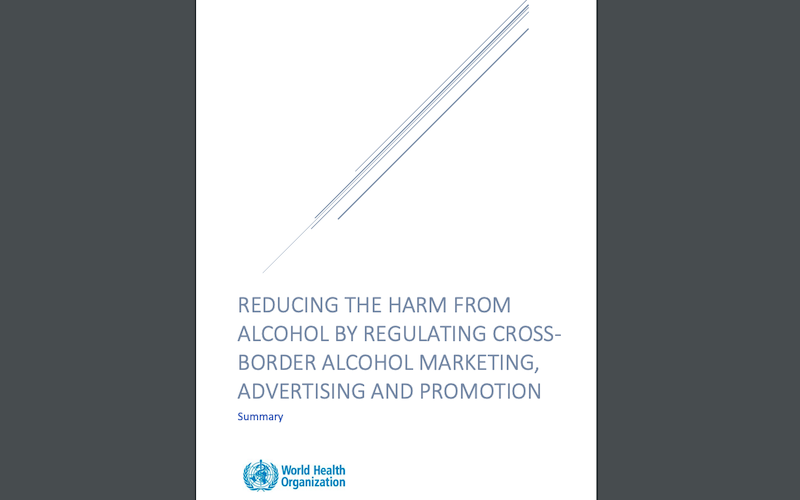 It is expected that when the World Health Organization’s (WHO) supreme governing body, the World Health Assembly (WHA) meets in May 2022 it will rubber stamp the new, but severely weakened Global Alcohol Action Plan. (Image: WHO)

Big Alcohol has once again actively undermined efforts by the World Health Organization to adopt a new alcohol action plan and mobilise governments to do more to stop preventable alcohol harm.

A plan to cut the global toll of alcohol harm, which includes the deaths of more than three million people annually, has been frustrated by significant interference in its development by the alcohol industry and the pernicious influence of industry-sympathetic governments led by the United States and the United Kingdom.

It is expected that when the World Health Organization’s (WHO) supreme governing body, the World Health Assembly (WHA) meets in May 2022 it will rubber stamp the new, but severely weakened Global Alcohol Action Plan.

Research undertaken by La Trobe University’s Centre for Alcohol Policy Research (CAPR) found that over the past two years alcohol industry interests actively worked to water down the draft action plan. The alcohol companies and their lobby groups made 60 submissions to the consultation on the Action Plan, making up nearly a quarter (24 per cent) of all submissions.

Many of these submissions made misleading claims and misrepresented evidence by casting doubt on public health measures that are proven to prevent and reduce the harm from alcohol. The analysis found nearly all these submissions (90 per cent) called for greater alcohol company involvement as a stakeholder/partner in harm reduction and policymaking; and more than half (56 per cent) of the submissions cast doubt on the WHO ‘SAFER’ initiatives – evidence-based policies that target the price, availability and promotion of alcohol products, as well as policies to improve health services and prevention of drink driving.

The report also found that only 36 per cent (17) of these submissions referenced any specific evidence to support their arguments, and of these, ten misinterpreted the evidence, and nine promoted weak evidence.

The global target to reduce per capita alcohol consumption by 20 per cent was changed to narrowly focus on ‘harmful’ alcohol use, which cannot be clearly defined, meaning measurement of progress will be difficult. (This dispute about per capita consumption versus harmful consumption has been a longstanding point of contention between public health and medical advocates and WHO officialdom.)

The emphasis on encouraging governments to adopt WHO evidence-based policies that target the price, availability and promotion of alcohol products, as well as policies to improve health services and prevention of drink driving, was reduced. The third draft of the Action Plan waters down key targets and actions that were specifically focussed on by the WHO’s own SAFER initiatives.

Finally, the Action Plan supports alcohol companies to self-regulate and set their own rules and standards for advertising and marketing, instead of governments taking responsibility for protecting public health.

Together these reports detail the full extent of this industry activity, including in Australia. The Sydney Morning Herald (Australian booze lobby urges WHO to abandon plan to slash consumption, 21 January 2022) reported “Australia’s peak body for the alcohol industry [Alcohol Beverages Australia] has written to the World Health Organization urging it to abandon a ‘problematic’ 2030 target of reducing per capita alcohol consumption by 20 per cent”. Alcohol Beverages Australia has a consistent record of denying alcohol control policy evidence.

This outcome is reflective of the recent history of alcohol control in Australia. In 2018 there was significant controversy when it was discovered Health Minister Greg Hunt gave the alcohol industry an inside run in the development of the National Alcohol Strategy, and more recently the mandating of pregnancy warning labels was long frustrated by industry lobbying which continually received sympathetic treatment by the Federal Government.

The draft Global Action Plan 2022-2030 was developed over the past two years following the efforts of Thailand, Russia, India and others alarmed by slow progress in achieving the modest goals of the 2010 Global strategy to reduce the harmful use of alcohol (GAS).

The GAS was developed to promote and support local, regional and global actions to prevent and reduce the ‘harmful’ use of alcohol. It outlines key components for global action and recommends a portfolio of evidence-based policies and measures to be implemented by countries. The global strategy also contains a set of principles that should guide the development and implementation of policies at all levels. This 2010 international mandate to tackle alcohol harm was strengthened in 2017 with the adoption of the United Nations 2030 Agenda and the Sustainable Development Goals 2030. The 2030 Agenda recognised decreasing alcohol consumption will contribute to reducing alcohol-related diseases and health conditions, including major noncommunicable diseases (NCDs) and injuries, ensuring healthy lives and promoting human well-being (SDG target 3.5).

Prior to the Covid 19 pandemic NCDs had become the largest cause of preventable death and disability, with annual worldwide deaths exceeding 36 million. Reducing all noncommunicable disease means reducing rates of smoking, improving nutrition, increasing physical activity and reducing the consumption of alcohol, and explains why strategies to reduce alcohol consumption feature so prominently in the Global Action Plan for the Prevention and Control of NCDs.

Clearly, this goal conflicts with the alcohol industry’s interest to sell as much booze as possible and maximise its profits, and consequently the industry invests significantly in activities to delay or prevent the implementation of policies that will reduce alcohol consumption. Its efforts mirror those of the tobacco industry – lobbying, questioning scientific evidence, wanting to be ‘part of the solution’ and self-regulation.

Pearls & Irritations in its Lobbyland series has previously focused on influence peddling by vested interests in Australia and in international fora to advance partisan and pecuniary interests. A whole raft of industries, including the weapons, fossil fuels, pharmaceutical, gambling and of course the tobacco industry have been repeatedly found to have influenced governments by denying the science, making political donations, cultivating, threatening and intimidating politicians and forging doubt in the public mind.

These well-documented strategies were laid bare in Naomi Oreskes and Erik Conway’s superb book Merchants of Doubt. Many others have made important contributions towards combating this dangerous influence.

For now, public health will have to support the WHA’s adoption of the Global Action Plan and focus on its implementation, taking the opportunities that arise from supportive member states to strengthen the plan. There is no alternative.

However, it does reveal the weakness of public health on alcohol control policy when compared to tobacco control. The WHO Framework Convention on Tobacco Control prohibits member states from interacting with the tobacco industry. Public health needs to step up its advocacy for the adoption of a similar international legal instrument if it is to prevail over Big Alcohol and prevent the continuing world-wide harm caused by alcohol.