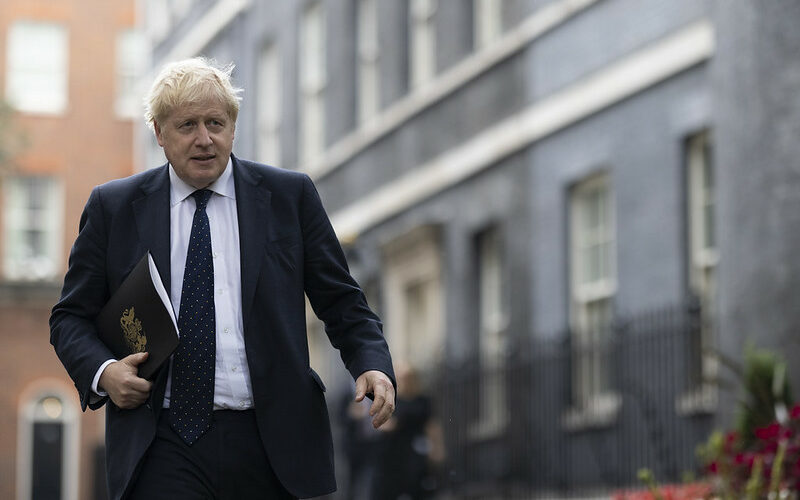 Complications over the Northern Ireland Protocol and pressure from Brexiteers are straining already fraught UK-EU ties.

British Prime Minister Boris Johnson is perplexing his supporters yet again. If imposing a three-line whip to push through legislation to undo a parliamentary statutory authority concerned with preventing sleaze, and doing so against the wishes of the bulk of his colleagues, is not alienation in itself, his proposals to raise taxes contrary to previous undertakings could shake party nerves beyond repair. But Johnson’s biggest chicken, a spoilt Brexit, is now coming home to roost.

It is the same chicken that caused such consternation over the Irish border when the UK supposedly exited the European Union. At that time Johnson had no assured majority in the House of Commons and was dependent on a small group of Irish unionists for support, unlike at present.

The legacy of that event was the Northern Ireland Protocol (NIP) along with the sought-after withdrawal agreement. The NIP has now come to mean different things to different people, unlike when it was negotiated when it was designed to mean only one thing however one chose to read it: that there would be no hard border within the island of Ireland. Of central importance was the preservation of the Good Friday Agreement of 1998, which ended the decades-long conflict with Sinn Fein, the Irish Republican Party and its terrorist brigades. The NIP set a delicate balance, one that could be easily upset if border controls on the island were to be re-established.

The NIP attempted to square a circle in that it embodied a contradiction, namely when is a border not a border, not only for those with optical illusions but for those more inclined to believe that an agreement should be open to literal interpretation. It is thought that some of its negotiators understood what they were doing and why, while others – in the British government – did not and had a single view: a border that separated parts of the UK and made them subject to a foreign order would not only offend sovereignty but be a betrayal of Brexit itself. If that could be the case then Brexit had not been done, nor could it be seen as having been done.

Wherein lies the difficulty that Brexiteers have refused to acknowledge even though they and the government had agreed to the NIP to overcome a “temporary” problem. The protocol at its heart provides that Northern Ireland should continue being in the EU internal market for goods, which would allow open trade with Europe and create in effect a potentially leaking hole in the EU wall. The risk was that goods could enter Northern Ireland from Britain and be reshipped from there directly into the EU without supervision or regulation – an easy prospect for smugglers. Some regulatory structure was needed for such trade so that the 26 members of the EU could be assured that Northern Ireland, and Britain for that matter, was not getting a benefit it hadn’t paid for, indeed one it had supposedly given away.

Some give-and-take was therefore required from both sides. Notionally the abstract border between Britain and Northern Ireland was deemed to exist in the Irish Sea. When the time came to implement the protocol, there arose all manner of trade complications that could not be monitored or, if they were, resulted in congestion and interrupted supply lines. Consequently the UK adopted an “easy come, easy go” approach to trade movements with Ireland, as well as to trade movements directly between Britain and the EU. The EU has demanded the UK fulfil its obligations, tighten up and be monitored by the European Court (a no-no for Britain), and set a deadline for this by the end of the year.

The UK has been pointing to increasing practical difficulties even over gestures of attempted compliance, and it is unlikely now that any new measures satisfactory to the EU will be in place by the deadline, or ever. It has accused the EU of a lack of understanding and of vindictiveness over Brexit. The diplomatic scene has been periodically disturbed by further argument over the EU’s traditional fishing rights in UK waters and threats to frustrate UK financial services in European markers. Understandably France, which will be the leading political influence in Europe once German Chancellor Angela Merkel departs the scene, is not well disposed to Johnson’s government following the “stab in the back”’ from AUKUS.

Britain has the option of triggering Article 16 of the NIP, which would allow it unilaterally to take “safeguard measures” if it believes the protocol is causing serious economic, societal or environmental difficulties that are liable to persist. Those conditions are not defined. But hard Brexiteers are angling towards the NIP’s outright dumping (a major treaty breach) and a renegotiation of the withdrawal agreement itself – back to square one if necessary. That would almost certainly spark a serious trade war with Europe, and even a breakdown of diplomatic relations between allies, and cause much discomfort almost everywhere.

The British government is planning instead a section-by-section approach to the opt-out clauses of Article 16, believing that the EU would not allow matters to go that far and that the US could be expected to weigh in to prevent it. The Irish too would be opposed. However, the Brexiteers are getting fired up and believe that Brexit has not been fully delivered and that British sovereignty remains compromised. It is unknowable whether Johnson would cut them off. He probably would, as being prime minister is now more important to him than Brexit. The EU is fed up with Johnson, who is having difficulty explaining why he signed a deal he now rejects and why he lied about the deal being an excellent one. His dodgy methods and cavalier treatment of both parliamentary and diplomatic process and the rule of law have worn the EU’s patience, and that of many others, very thin.

Not a happy place for Johnson, notwithstanding his continuing bravado that all is well. While the next general election in the UK is not due until 2024, there has been some hope among Conservatives that it might be brought forward to consolidate the “red” northern seats won from Labour at the last election. This is less likely now that Johnson has been losing ground politically and personally. As with the ALP in Australia over foreign and defence policy, the British Labour Party does not want to move too far from the government over Brexit – still a hot and divisive topic in most circles. Strategists have advised Labour leader Keir Starmer, who despite considerable intellectual ability hasn’t yet been able to cut through with the electorate, to attack the government on its handling of relations with Europe more widely in a manner that transcends Brexit, thereby avoiding the word that cannot be spoken.

The simmering situation at the Belarus/Polish border – where a cynical game is being played with distressed Syrian refugees by dictators Vladimir Putin and Alexander Lukashenko on one side and the illiberal Polish government on the other – is another unwelcome test for the EU which might, like the UK/EU trade dispute, escalate beyond control, as no one seems to be in charge in either sphere.

The US will be unhappy about any of these developments, particularly the UK/EU border dispute, as US sympathy and support for the Good Friday Agreement is even stronger than that of the British government, constraining Johnson more than he would like.