Maintaining an open mouth of the Murray River in South Australia was a key objective of the Murray Darling Basin Plan (MDBP). The Basin Plan was established by the Australian Government to address the chronic over-allocation of water for irrigation and other purposes. One aim of the MDBP was to recover more water for the environment including sufficient water to maintain an open mouth without the need for dredging most of the time. Following a review of the MDBP by the Wentworth Group it appears that this objective will not be meet.

The Wentworth Group of Concerned Scientists has just released a report on the first 5 years of implementation of the MDBP (http://wentworthgroup.org/2017/11/review-of-water-reform-in-the-murray-darling-basin/2017/). This plan involved considerable and often contentious consultation. An aim was to recover 3200GL of water for the environment, or implement projects which will deliver “equivalent” outcomes.  This was to achieve a range of outcomes including improving water quality, ecological condition and flows in the Coorong, Lower Lakes, and Murray Mouth (CLLMM) section at the “estuary” end of this vast drainage system.

In response to growing concerns on the commitment of governments to fulfil the requirements of the Plan, an agreement was reached in December 2016 by all MDB governments that the Plan should be delivered “on time and in full”. The Wentworth Group put forward five actions that we felt necessary to deliver on this promise:

Under the third of these actions we examined the likely risks of failure of the MDBP if insufficient water was recovered to improve the health of CLLMM. This is a region where there are listed wetlands under the international RAMSAR convention that provide critical habitat for migratory birds. During drought periods it is apparent that water flows are inadequate to maintain lake levels and water quality of Lower Lakes (Albert and Alexandrina) and provide for freshwater flows over the barrages near to the mouth into the Coorong system. We had sufficient evidence from a range of sources that at least 4 GL per day was needed to flow past Wellington at the entrance to Lake Alexandrina to maintain lake levels and achieve minimum desired outflows at the barrages into the Coorong. But did the Plan provide sufficient water to achieve an outflow at the barrages to maintain an open Murray Mouth?

A Basin Plan objective is for the mouth to “remain open at frequencies, for durations, and with passing flows, sufficient to enable the conveyance of salt, excess nutrients and sediment from the Murray-Darling Basin to the ocean”. A target for the mouth was for it to be open without the need for dredging in at least 95% of years. But this target is far from being met; more realistically we estimate that the mouth will require dredging in at least 95% of years. Quite a different scenario! A little history is needed here to explain our conclusion.

The barrages were constructed in the late 1930s to make the lower lakes a dominantly freshwater system at a level above mean sea level. The tidal basin pre-barrages was approximately 100 square km and post barrages around 10. As a consequence the power of the tidal exchange was greatly reduced. Along with this reduction and the progressive extraction of river flows upstream, sand from the sea began to accumulate at the river mouth. The river started to choke such that in the early 1980s and again during the millennial drought it closed. The sea was winning. Sand from alongshore and offshore was feeding into the entrance so that dredging was required; at present two dredges are operating. We now know that only major flood flows such as occurred in late 2010 can flush the sand from the entrance. Massive sand volumes within the entrance have further weakened tidal flows and the sand keeps coming once flood flows subside.

The Murray River sits within a leaky geologic salt-rich basin. Salt must get flushed otherwise it will accumulate behind the barrages along with nutrients. If there are no barrage flows it is likely that lake levels will fall below sea level in dry periods due to evaporation (600-800 GL per year). This occurred during the last drought causing exposure of acid-sulphate soils in some areas and excessive alkalinity in others—a toxic mess! In addition the Coorong needs its periodic flush of freshwater to maintain its delicate ecology. Rivers can die from the bottom up so that the MDBP must accommodate sufficient water to do the necessary flushing and maintain lake levels. However, the Plan as conceived will not provide for an open mouth; dredging costing around $6m per year is going to be required most of the time now and into the future. 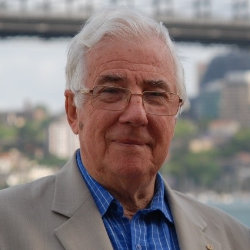