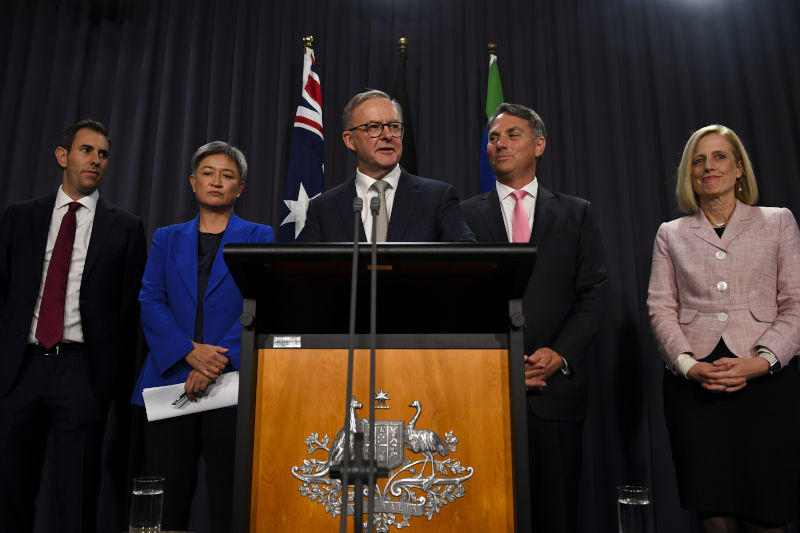 Barrie Cassidy called out election night reporting, the reluctance to acknowledge Labor’s victory, the focus on Liberal party failure and the rise of the teal independents, rather than Labor’s success. Image: AAP/Lukas Coch

On 21 May Anthony Albanese led the Australian Labor Party to a historic victory, winning government from opposition at an election for just the fourth time since the second world war. Labor appears set to form majority government with at least 76 seats and several seats still in doubt, taking 10 seats from the Liberal party with a 2 party preferred swing of 3.8% nation-wide. After 9 years in opposition this was a decisive victory for Labor and a transformative moment in our history.Yet as the ABC’s election tally showed a certain Labor victory and the Liberal party as having lost at least 17 seats, at least 10 of them to Labor, 1 to the Greens, and a further 6 to ‘teal’ independents, Leigh Sales turned to a beaming Labor’s Tanya Plibersek and asked, ‘so, where did Labor go wrong?’.

It was the question that encapsulated the poverty of political journalism over the last 3 years, which reached its nadir during this election campaign. Barrie Cassidy called out this ‘bizarre’ election night reporting, the reluctance to acknowledge Labor’s victory, the focus on Liberal party failure and the rise of the teal independents, rather than Labor’s success; ‘There’s barely any mention that we have a new government’ Cassidy lamented. Instead, the loss of one particular seat, Labor’s candidate Kristina Keneally to Independent Dai Le in Fowler, was taken as reflective of an entire party failure – despite the election victory. It left no room for acknowledging either that Labor ran a disciplined, focused, campaign or its key policy differences in areas that mattered most to voters – cost of living, childcare, free TAFE, climate change, aged care, health care and committing to the Uluru statement from the heart.

The narrative of Labor failure in the face of success, so clearly enunciated by Sales – to which a stunned Plibersek replied, ‘we have won’ – a pastiche of ‘gotchas’, ‘gaffes’ and photo ops, can be seen in the strained, at times absurd, reporting since. The deadening prism of ‘bothism’, that bane of reasoned journalism and political understanding, recast this Liberal party devastation into an imagined devastation for ‘both major parties’. Which it is not. ‘The results are an indictment on both major parties’; ‘The way Australians regard the two-party system has changed — for both sides of the aisle’; and, at its erroneous worst, this; ‘an election that saw both major parties bleed votes’; and ‘both parties suffered a savage swing in the primary vote’. Well, no. The ‘savage swing’ in Labor’s primary vote was 0.8%, the coalition’s was more than 6 times that, at 5.3%.

The Liberal party has been devastated across every state, losing its heartland urban seats in Melbourne, Adelaide, Sydney, Perth and Brisbane, many of which had never been anything but Liberal. The treasurer, Josh Frydenberg, and several ministers lost their seats, with Michael Sukkar in Deakin still in doubt. The coalition now holds just 57 or 58 seats in the 151 seat parliament where it previously had 76 and has lost all but two of its urban holdings across Melbourne. Even in Queensland, where Labor’s Terri Butler lost Griffith to the Greens, Labor’s primary vote increased, leaving several previously safe LNP seats on slender margins.

All six of the teal independents who defeated Liberal members in previously safe seats are women. Professor Chris Wallace describes this ‘genderquake’: ‘Victorious teal candidates in Goldstein and Kooyong (Victoria), Mackellar, North Sydney, and Wentworth (NSW), and Curtin (WA) helped take down a government they perceived as a male privilege protection racket.’ Exacerbating its disastrous standing among women, the Liberal party now has just 7 women in the House of Representatives after 6 women lost their seats and, unless it adopts a gender quota for winnable seats as Labor did nearly 30 years ago, there is little hope of that meagre number of Liberal women in the House expanding soon.

Politics has changed with this election as it always, eventually, does – that’s its great fascination – and the rise of the Greens over the last 30 years into what is now an enduring third force with its presence cemented in both Houses, is testament to that. Labor’s primary vote is at a historically low level from which to form government precisely because of that third force and the stunning success of teal independents, and it will continue to hover at that level in this reset political landscape, even in government.

Where will the teal independents sit in this new multi-party configuration? Labor in majority government as now appears likely leaves them with less capacity to sway policy deliberations than they might have hoped for, and less urgency for them to do so if Labor moves quickly on climate change, a federal ICAC, and a voice to parliament as Albanese has already committed.

One thing is certain, this will be a more collegial, less combative, and far more diverse parliament than any we have seen before. And after four years of what the out-going French foreign affairs minister, Jean-Yves Le Drian, described as Scott Morrison’s ‘brutality and cynicism, and .. unequivocal incompetence’, that really is a parliamentary revival to look forward to.