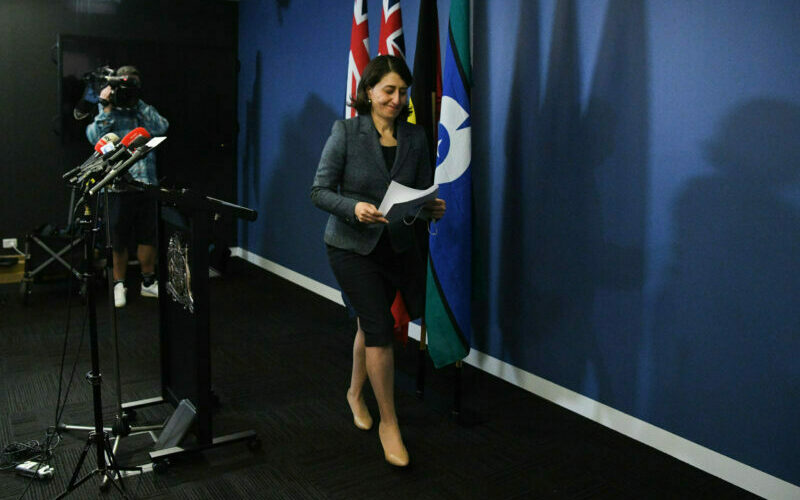 The Willoughby byelection came about after Gladys Berejiklian walked away from politics. (Image: AAP/Bianca De Marchi)

The emotional and moral maturity of our politicians has been on trial at ICAC.

Former NSW premier Gladys Berejiklian has had months to prepare herself for the hearings at the Independent Commission Against Corruption (ICAC). At the very least, she has had the benefit of advice from her barrister, Sophie Callan SC, if not also from her current partner, high-profile lawyer Arthur Moses SC. Yet the curious thing about her anxious, repetitive testimony over one and a half days was how unconvincing it was, how banal, how devoid of basic insights about the way personal and public relationships are more usually conducted.

Berejiklian tried repeatedly to press her claims to unwavering integrity.

This clearly matters desperately to her, both to her as a person and to the shoring up of her political persona. She has often paraded those same claims at press conferences and, indeed, she repeated them to the media as soon as she had completed her ICAC evidence on November 1.

Without pre-empting any decision that ICAC will make about Berejiklian’s conduct during the years from 2015–2018 when she was in a relationship with Daryl Maguire (which continued until 2020), it would appear from the many intercepts played and transcripts referred to that “putting the public first” may be far more of an ideal than a reality in current Coalition politics.

It’s certainly arguable that what comes first, last and everywhere in between for Coalition politicians at both state and federal levels currently is the grasping, holding and maintaining of political and financial power.

Whatever abuses of power occur along the way — most especially the widespread misuse of public funds to win votes — becomes something that “everybody does”. Or is justified as necessary largesse to a “needy” community, ignoring the arguably more legitimate “needs” of other communities, and the abuses of public trust as well as public funds that such attitudes accelerate.

That a former treasurer and premier of Australia’s most populated state appears to have been influenced by a man like Maguire is partly (but only partly) a sad tale of a gullible, foolish woman manipulated by an untalented, bullying, demanding on-and-off partner/lover/boyfriend.

This goes to her judgement of people, including trusted colleagues. In that, she could hardly come off more poorly. There was not a single intercept re-played in the hearings where Maguire speaks to “Glad” with her wellbeing in mind.

His interests, his unmitigated self-interest, prevailed. Always. And “Glad” accepted that, placating Maguire, cajoling him, calming him down, telling him she was “concerned for him”. Yet as concerned as she was, and despite years of listening to his ugly bravado, grandiose scheming, whining, self-pity, Berejiklian was insistent throughout the ICAC hearings, that, “I believed him.” “I trusted him.” “I had no reason to doubt him.”

There’s an excellent description still used in Britain for men much like Maguire.

He fits the category of a “wide boy”, someone long past boyhood who lives on the edge, ceaselessly wheeling and dealing, making use of people for whatever he can get out of them, perhaps inside the bounds of what’s legal but often beyond what’s trustworthy or defensible.

Maguire revealed something of that self-serving ruthlessness when he asserted that, “No one does anything for nothing”. Not in his world, anyway. Yet this was the same individual to whom the NSW treasurer then premier freely gave her trust not for weeks or months but for years.

And around whom she surrendered whatever discernment she may more normally have had. “Don’t tell me that,” she warned. Also, “I don’t need to know.”

Those phrases came up repeatedly on the phone intercepts. Are they remarks that most people would make when what they are likely to hear is beyond reproach? Yet, repeatedly, and even when the first ICAC enquiry was closing in on Maguire, Berejiklian’s “radar” failed to flicker.

It’s this, surely, that takes us beyond the sorry conduct of two emotionally and/or morally immature individuals. I have written previously about the dangerous intransigence or close-mindedness of Berejiklian. That has cost the state and nation a heavy price, most recently in relation to her refusal to mandate masks plus vaccinations for everyone involved in airport pick-ups. Or to insist that the federal government provide adequate, dedicated quarantine, rather than the hotel version that has been repeatedly breached.

There are numerous other examples, too, of Berejiklian knowing best while ignoring the evidence of experts.

Or of insisting that while others’ “recollections” may have some validity, only her own version is correct. An inability to self-question rigorously, and to learn from one’s own as well as others’ experiences, is always dangerous. In a politician, it is endangering. They are the people making significant decisions daily affecting millions. Yet increasingly in federal politics as well as in NSW and beyond, we are witnessing a normalisation of abuses of public funds, public trust and of the remains of “fairness” and equity that has profound effects on us individually, as well as on the body politic.

It is entirely possible that within the context of Australian and especially Coalition politics, “throwing funds” at a seat in order to secure it, rather than responding to calls for funds on a need’s basis, really is “business as usual”. Berejiklian repeatedly demonstrated a truly disturbing lack of comprehension that she could have called out Maguire’s flamboyant manipulation of her and acted differently. Even allowing for her obvious limitations in the twin realms of emotional and moral intelligence, such blindness, I would argue, was possible only because of the wider context of utterly self-serving, win-at-any-price politics.

The “price” discussed most often at the careful, soberly conducted ICAC hearing may appear to be the financial one. How many millions went Maguire’s way, for what and why. But the ethical costs are what the commission — on behalf of us all — is really seeking to uncover. This couldn’t matter more. Yet until we also have a federal integrity commission as strong as the one in NSW, those ethical costs will remain incalculable.