By the numbers: The de-dollarisation of global trade 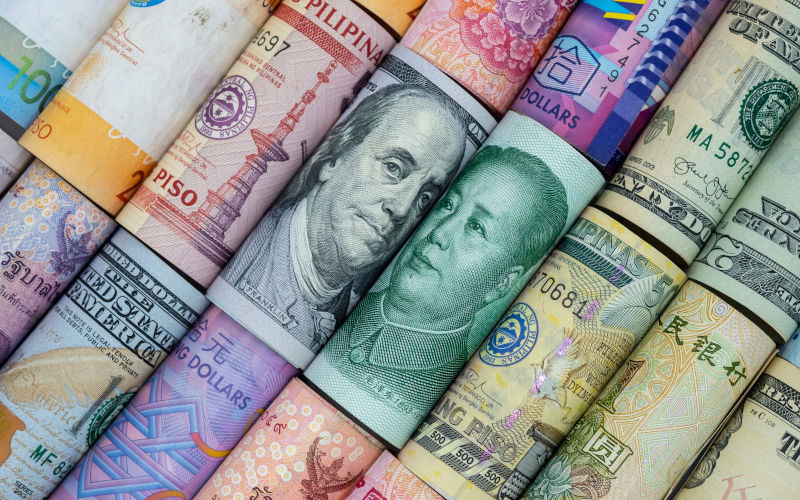 Data suggests that US dollar reserves in central banks are dwindling, as is the influence of the US on the world economy. This presents a unique opportunity for regional currencies and alternative payment systems to enter the vacuum.

First published in The Cradle January 13 2023

The imposition of US trade restrictions and sanctions against a number of nations, including Russia, Iran, Cuba, North Korea, Iraq, and Syria have been politically ineffectual and have backfired against western economies. As a result, the US dollar has been losing its role as a major currency for the settlement of international business claims.

Because they do not adhere to the policies of the US and other western powers, over 24 countries have been the target of unilateral or partial trade sanctions. These limitations, nevertheless, have turned out to be detrimental to the economies of the Group of Seven (G7) nations and have begun to impact the US dollar’s hegemony in world trade.

In its space, a “new global commercial bloc” has risen to the fore, while alternatives to the western SWIFT banking messaging system for cross-border payments have also been created.

Geopolitical analyst Andrew Korybko tells The Cradle that the west’s extraordinary penalties and seizure of Russian assets abroad broke faith in the western-centric paradigm of globalisation, which had been declining for years but had nonetheless managed to maintain the world standard.

“Rising multipolar countries sped up their plans for de-dollarisation and diversification away from the western-centric model of globalisation in favour of a more democratic, egalitarian, and just one – centered on non-western countries in response to these economic and financial disturbances,” he adds.

The International Monetary Fund (IMF) recorded a decline in central bank holdings of US dollar reserves during the fourth quarter of 2020—which went from 71 percent to 59 percent—reflecting the US dollar’s waning influence on the world economy.

And it continues to worsen: Evidence of this can be seen in the fact that the bank’s holdings of dollar claims have decreased from $7 trillion in 2021 to $6.4 trillion at the end of March 2022.

According to the Currency Composition of Official Foreign Exchange Reserves (COFER) report by the IMF, the percentage of US dollars in central bank reserves has decreased by 12 percent since 1999, while the percentage of other currencies, particularly the Chinese yuan, have shown an increasing trend with a 9 percent rise during this period.

The study contends that the role of the dollar is waning due to competition from other currencies held by the bankers’ banks for international transactions – including the introduction of the euro – and reveals that this will have an impact on both the currency and bond markets if dollar reserves continue to shrink.

To boost global commerce and Indian exports, the Reserve Bank of India (RBI) devised in July last year a rupee-settlement mechanism to fend off pressure on the Indian currency in the wake of Russia’s invasion of Ukraine and US-EU sanctions.

Iran has also proposed to the Shanghai Cooperation Organisation (SCO) a euro-like SCO currency for trade among the Eurasian bloc to check the weaponisation of the US dollar-dominated global financial system.

“They must use multilateral institutions like BRICS and the SCO to this aim – and related ones, such as currency pools and potentially even the establishment of a new currency whose rate is based on a basket of their currencies, to mitigate the effects of trade-related restrictions,” Korybko remarked.

The International North-South Transport Corridor (INSTC) is being revived as a “sanctions-busting” project by Russia and Iran. The INSTC garnered renewed interest following the “sanctions from hell” imposed by the west on Moscow. Russia is now finalising regulations that will allow Iranian ships free navigation along the Volga and Don rivers.

The INSTC was planned as a 7,200 km long multimodal transportation network including sea, road, and rail lines to carry freight between Russia, Central Asia, and the Caspian regions.

On 30 December, 2022, Russian President Vladimir Putin and his Chinese counterpart Xi Jinping held a video conference in which Putin reported that bilateral trade between the two countries had reached an all-time high with a 25 percent growth rate and that trade volumes were on track to reach $200 billion by next year, despite western sanctions and a hostile external environment.

Putin stated that there had been a “substantial growth in trade volumes” between January and November 2022, resulting in a 36 percent increase in trade to $6 billion. It is likely that the $200 billion bilateral trade target, if achieved by next year, will be conducted in Russian rubles and Chinese yuan, even though the details of the bilateral trade settlement were not specified in the video conference broadcast.

This is because Moscow and Beijing have already set up a cross-border interbank payment network similar to SWIFT, increased their gold purchases to give their currencies more stability, and signed agreements to swap national currencies in several regional and bilateral deals.

In addition, both Russia and China appear to have anticipated a potential US seizure of their financial assets, and in 2014 they collaborated on energy-centered treaties to strengthen their strategic trade links.

In 2017, the ruble-yuan “payment against payment” system was implemented along China’s Belt and Road Initiative (BRI). In 2019, the two countries signed an agreement to replace the dollar with national currencies in cross-border transactions and converted their $25 billion worth of trade to yuan (RMB) and rubles.

Independence from the dollar

This shift decreased their mutual reliance on the dollar, and currently, just over half of Russia’s exports are settled in US dollars, down from 80 percent in 2013. The bulk of trade between Russia and China is now conducted in local currencies.

Xinjiang in western China has also established itself as a key cross-border settlement center between China and Central Asia, making it a major financial hub in the region. Cumulative cross-border yuan settlement handled in Xinjiang exceeded 100 billion yuan ($14 billion) as early as 2013 and reached 260 billion yuan in 2018.

According to analyst Korybko, significant progress has been made in reducing reliance on the US dollar in international trade, but there is still much work to be done. He notes that the US is not likely to simply accept the challenges to its financial hegemony and is more likely to act to defend it.

“For this reason, it is expected that the US will try to enlist the support of key players by offering them preferential trade deals or the promise of such deals, while simultaneously stoking tensions between Russia, China, India, and Iran through information warfare and possibly threatening to tighten its secondary sanctions regime as ‘deterrence’.”

Russia has been working to establish currency swap agreements with a number of trading partners, comprising the five-member Eurasian Economic Union (EEU), which includes Russia, Armenia, Belarus, Kazakhstan, and Kyrgyzstan.

These agreements have enabled the Russian Federation to conduct over 70 percent of its trade in rubles and other regional currencies. With a population of 183 million and a GDP over $2.2 trillion, the EEU poses a formidable challenge to western hegemony over global financial transactions.

Iran and the EEU have recently concluded negotiations on the conditions of a free trade agreement covering over 7,500 categories of goods. When the next Iranian year begins on 21 March, 2023, a market with a potential size of 700 billion dollars will become available for Iranian goods and services.

The trend towards de-dollarisation in international trade, particularly among the BRICS nations, has gained significant momentum in recent years – together they represent 41 percent of the world’s population, 24 percent of its GDP, and 16 percent of its commerce

In 2015, the BRICS New Development Bank, recommended the use of national currencies in trade. Four years later, the bank provided 25 percent of its $15 billion in financial assistance in local currencies, and plans to increase this to 50 percent in the coming years.

This shift towards de-dollarisation is an important step for emerging economies as they seek to assert their role in the global economic system and reduce their reliance on the US dollar. While the adoption of de-dollarisation may present some challenges and uncertainties, it is an important step towards a more diverse and balanced global economy.

F.M. Shakil is a Pakistani writer covering political, environmental, and economic issues, and is a regular contributor at Akhbar Al-Aan in Dubai and Asia Times in Hong Kong. He writes extensively about China-Pakistan strategic relations, particularly Beijing's trillion-dollar Belt and Road Initiative (BRI).