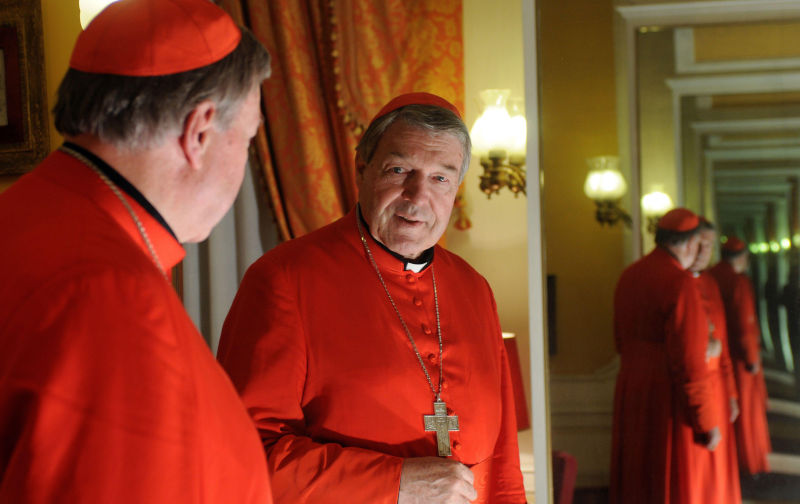 The media reaction to the death of Cardinal George Pell is extraordinary. But his contribution to Australian Catholicism is very much a mixed blessing.

Australian Catholicism has had its fair share of controversial figures. Melbourne Archbishop Daniel Mannix and Bob Santamaria come to mind immediately. But outstripping them all is Cardinal George Pell, a man who even in death, continues to cause contention.

At the heart of the controversy is Pell’s particular vision of Catholicism. His faith was in a church that was eternal, unchanging, standing outside the uncertainties of history. Founded by Christ, the church’s teaching and structure was of divine origin and therefore beyond human judgment. This was re-enforced by an infallible papacy.

There was a particularly revealing exchange between Pell and Gail Furness, Counsel Assisting the Royal Commission, in February 2016. She asked him about the church’s failure to address sexual abuse and ‘the structural problems in the way in which the church operates.’

In response Pell claimed that this failure doesn’t ‘call into question the divine structure of the church, which goes back to the New Testament [including] … the role of the pope and bishops.’ The church’s problems he told Furness ‘have overwhelmingly been more personal faults, personal failures, rather than structures.’ Clearly, for him the church is part of the divine plan and its structure has nothing to do with sin and failure.

For someone trained in history at Oxford University, the notion of an institution beyond history was peculiar. His doctorate was on Cyprian (died 258AD), bishop of Carthage, himself a tough, uncompromising man who engaged in vigorous controversy with the then pope, Stephen I (254-257). It seemingly didn’t strike Pell as ironic that if Cyprian could confront Pope Stephen, then perhaps some of us might dare to criticise and disagree with Pope John Paul II.

Even though he lived through and studied theology in Rome during Vatican Council II (1962-1965), it seemed have little impact on him. The whole challenge of Vatican II had been to open up the church and make it more humbly responsive to contemporary challenges. It could no longer exist in triumphant isolation rejecting modernity, as though the Enlightenment and French Revolution hadn’t happened and democratic pluralism didn’t exist.

What Pell did was to adopt a particularly aggressive form of this old Catholic triumphalism. He had no sympathy for backsliders like me who talked about ‘dialogue’ with the world and that didn’t reject modern errors.

I think his ecclesial vision also helps explain his response to the sexual abuse crisis. ‘It was not of much interest to me’, he told the Royal Commission speaking of the serial abuser Gerald Ridsdale. For someone with such a high vision of the church and priesthood, it was very difficult for him to concede that church and clergy had sinned so grievously and ruined many lives.

While those who knew him well said that Pell was a kind and convivial man, what seemed to be lacking was a pastoral sense. Decisions, especially moral decisions on gender and sexuality were either/or for Pell and for the traditionalist church he represented. There was no grey area. The options were to obey the law, or commit mortal sin and risk damnation.

It is precisely this model of absolutist church that Pope Francis is trying to move beyond. For him the church is a ‘field hospital’, a place where people are cared for and not lectured and judged. ‘Who am I to judge?’ the pope asked, speaking of LGBTQIA+ people.

But for Pell dissent was broader than just disobeying the moral strictures of the church. There were also those who dissented from what for him was the essential core of belief. In a 2003 lecture he castigated ‘liberal’ Catholics who remain ‘full communicating members of the Catholic church while rejecting specific doctrines of faith and morals.’ The problem was the ageing Vatican II generation who had embraced ‘the spirit of the Council.’ He assured his listeners that ‘it is hard to find a Catholic dissident under fifty years of age.’ I guess nowadays it would be under seventy!

While dissidents talk about ‘loyal dissent’, Pell asked: ‘When does “loyal dissent” become unacceptable disloyalty?’ He claims that the notion of ‘loyal dissent’ is ‘a new category which has been introduced into the conversation since [Vatican II].’ The problem here is that Pell was simply wrong.

The great medieval theologian, Saint Thomas Aquinas, speaks of legitimate disagreement in the church. Aquinas is clear: ‘If several people intend something that honours God or is for our neighbour’s profit, but one person says it is good and another has a contrary opinion … then this discordia (dissent) is not a sin nor repugnant to charity … because genuine concord is a union of wills, not unified opinion’ (Summa Theologica, II, II, q.37, a.1). It’s also generally accepted that Catholics can sincerely disagree with what’s called ‘ordinary magisterium’, non-defined papal and church teaching. Dissent has a long and honourable tradition within Catholicism, George Pell notwithstanding.

I long suspected that Pell would have been working in Rome over the last few years to make sure the cardinals didn’t elect another pope like Francis whose papacy he considered to be a disaster. There were already rumours that he was making common cause with the Hungarian Cardinal Peter Erdö, Archbishop of Esztergom-Budapest, to manage the next conclave and return the church to John Paul II/Benedict XVI ‘orthodoxy’. An article in yesterday’s Guardian has revealed just how accurate those suspicions were.

Sydney Archbishop Anthony Fisher assured the media that Pell’s impact on Australia ‘was considerable and will be long-lasting.’ While it might be long-lasting with the archbishop, it’s certainly very much in decline among the small but faithful community of people who are still very much committed to the Australian Catholic church.