Celebrating the life of Bruce McFarlane 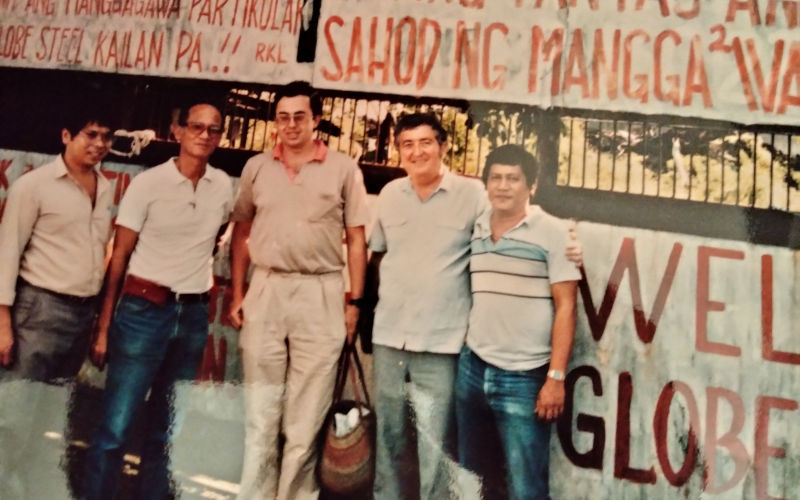 Humphrey McQueen started a tribute to Bruce McFarlane two years ago with the following paragraph.

Few people have two songs written about them. Few are arrested three times in anti-war protests. Few are threatened with castration by a member of parliament. Few are burnt in effigy. Few publish dozens of learned articles and a score of books, translated into Chinese, Dutch, Italian, Japanese and Norwegian. Few co-edit two academic journals. Few hold chairs in politics and in economics. Few work with four state Planning Commissions, Belgrade, Warsaw, Delhi and Hanoi.

Bruce was 84 at the time this tribute was written: Bruce McFarlane: noble protagonist of the proletariat and the peasantry.

And he has now died at the age of 86. McQueen gives a comprehensive description of Bruce the man, his life and his contribution to Marxism. He was a remarkable man and as friends from Adelaide we wanted to acknowledge Bruce the Marxist, thinker, political activist, the man and good friend. Bruce was larger than life, loyal, brave and extremely clever. He was also a man of parts. He knew his way around a race course, could gamble at cards and was a member of Australia’s only political party that could fit into a Volkswagon, the Adelaide Revolutionary Marxists (ARM). The anecdotes are endless. We will share a few.

At Adelaide University, where Bruce was a professor of politics, the students would produce a counter calendar each year designed to provide frank appraisals of the lecturers and subjects for the new student body. One year, Bruce got such rave reviews the editors decided they needed a second opinion. The second opinion claimed the first person didn’t know what they were talking about. Bruce was much better than described.

He was a brilliant lecturer. He would say that a lecture should only have three points and these would be intertwined to produce a cohesive story. No power point for Bruce. He would jot his three points on a scrap of paper and tell a rollicking and powerful story. A lecture we attended as students traced the history of the West from Stalingrad to the end of the War in Vietnam centring on the Soviet T-34 tank which he told us with increasing excitement smashed the fascists in Europe, liberated China and then in 1975 broke through the gates of the presidential palace in Saigon. By this time, he appeared to be growing increasingly exhausted and paused, then lifting his head and raising one finger insisted: “It was the same tank.” He brought the house down.

Bruce was the only Marxist to ever hold a chair in an economics department in an Australian university. This in itself gives him a claim to fame. Bruce was a fighter. There were many occasions when his powerful use of rhetoric was an advantage. He could also, as McQueen points out, be physically brave. On one occasion when there was a factional fight on an editorial board the faction associated with Bruce asked Gabriel Kolko how they should respond to the opposition. The telegram reply they received was legendary, two words, “Unleash McFarlane”.

On his deathbed Deng Xiaoping is said to have murmured “I’m going to meet Marx”. We hope Bruce can make the meeting.