We could secure a spectacular future for ourselves and help the planet. Instead the federal government dodges the hard decisions; passes the buck. Fortunately, state and territory governments are stepping up to the plate.

New analysis shows that Australia needs to cut emissions by at least 50% by 2030 to meet goals of the Paris agreement. A report by a new group calling itself the Climate Targets Panel has found the Morrison government should be setting a 2030 emissions reduction target of between 50% and 74% if Australia is to comply with goals of limiting global heating to 2C and 1.5C respectively.

That higher cuts will be needed were foreseen long ago. According to the United Nations Environment Program Report of 2019:

It’s obvious. The longer we delay the more severe the action we will need to take to keep the planet healthy and habitable. The more severe it is, the more discomforting for people, and the more fearful the politicians will be for their jobs, rather than for the future of the country whose people employ them to do the right thing.

In Australia, we watch while politicians, and others with a megaphone, argue the toss about whether climate change is real, or just a naturally occurring event about which we can do nothing. The science is clear – we are the major influence causing the climate to change because of how a majority of us live our lives.

Meanwhile, politicians exercising their free-speech-without-responsibility” peddle information deliberately designed to mislead. For what purpose? To let them dodge the hard decisions that would avoid what John Hewson has described as the greatest example of inter-generational theft. That is, passing on the costs to future generations so that the present generation(s) can enjoy the benefits from not having to change much.

Our hypocrisy is on show when we say we are ‘only’ responsible for about 1.4% of global CO2 emissions so what we do will make no difference. Yet we are only about 1% of global GDP (purchasing power parity) and we often tell the rest of the world how to trade and what trading rules they should obey because, we say, it is in our legitimate national interest.  So is what they do about climate.

In the meantime we bake through hot summers. We watch a tinder dry country go up in flames at huge cost. We see long-term rainfall patterns change.  We see agriculture affected and we watch our natural beauty (and fauna) devastated. And still we talk.

The government’s mantra is technology not taxes: populist drivel designed to avoid having to argue substance. It makes you wonder whether they are capable of an argument of substance. Instead, they emphasise some hoped-for technology improvement so they can continue to back coal.

Carbon capture and storage has long been a favourite because, if it were to work, nothing would have to change; no industry or behaviour change. Just capture the CO2 and pump it underground – with the expectation that it won’t leak. Of course it would have to be on a scale that we’ve not yet achieved in Australia. And as for leakage? A Canadian plant found that about 30% of the captured CO2 leaked into the atmosphere. International experience suggests this technology is still a big if.

We should demand leadership – demand an end to this demeaning political wrangling at federal level. Demand that our politicians take on challenges, even daunting ones, to secure the future of the country, not just their own jobs at the next election.

It is also clearly in our interest for the world to change how it generates and uses energy and what it does with it, not just change how it trades. We could be a catalyst for real change instead of the brake that we and a handful of other countries were in Madrid, 2019, where Australia fought hard to keep old carbon credits rather than taking actions that might affect consumers. Publicly dodging the hard decisions; passing the buck; she’ll be right.

The federal government expects to somehow get to ‘net zero carbon’ sometime this century, hoping that it is earlier rather than later. It has committed to a “technology road map”: akin to sitting in your car with a map open but knowing only that you want to head somewhere north. Lack of certainty, underwhelming commitment, political games don’t mix well with existential threat.

If our nation’s leaders won’t do it, others must – and State and Territory governments have all stepped up. Their leaders have committed to net zero emissions by 2050. While commitments are only as good as the policies that underpin them, now that we know the destination we can find the path.  A sensible discussion about the ‘net’ in net-zero emissions, and debate about the mix of policies to get there, is the key; we should end this focus on the ‘zero’. Focus instead on the ‘net.’

Zali Steggall (MP for Warringah) has introduced a bill reportedly supported by about 100 businesses and organisations. It provides for a 2050 net zero target and would require the government to set a rolling emissions budget to meet it. It’s a destination and a means to monitor progress. Notwithstanding the widespread support from business (although with questions about details), the government apparently doesn’t like it so it might not even get debated in our “representative democracy”. This bill is the subject of a parliamentary inquiry.

The government may be able to sideline the efforts of an independent backbencher in the short-term, but it won’t want to indefinitely ignore the weight of public opinion, and certainly not the demands of business.

According to a Lowy Institute poll in 2019, 61% (of Australians) said global warming is a serious and pressing problem. We should begin taking steps now even if this involves significant costs.

A government that dog whistles about ‘keeping electricity bills low’ should listen. A majority is saying that most of us would rather live on a sustainable planet and pay a little more (if we have to) to turn on the lights – maybe with compensation for those who legitimately can’t afford to pay more.

While about 75% of young people (the ones with the long future) want change, less than 50% of people over 45 were enthusiastic. Wisdom doesn’t necessarily accrue with age; or is the selfishness gene showing its age?

As in so many things – same-sex marriage for another – business is again way ahead of (the federal) government on tackling climate change. Companies are committing to change – from green buildings to insurance, to manufacturing to generation of renewable energy, and financial services. Those who would give anything to do nothing are on a different planet.

We could secure a spectacular future for ourselves and help the planet. It seems enough of us want to and are willing to work for it. But we need leadership by politicians who are determined, strategic and capable. 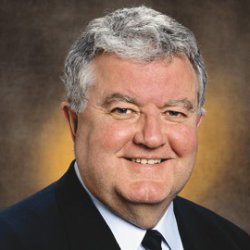 Ian William Chubb AC FAA is an Australian neuroscientist and academic, who was the Chief Scientist of Australia from 23 May 2011 to 22 January 2016.