The US does not need a wannabe Lincoln or Churchill, it needs a Leo Amery

Trump likes to see himself as a wartime president like Churchill or Lincoln. The Brits flattered the first proposity by giving him dinner in Churchill’s birthplace, Blenheim Palace.

He recently projected the second proposity by having himself interviewed at the Lincoln Memorial. He is not the solution to America’s problems – he is a result of them and its apogee. The solution starts with the kind of political courage shown by Sir Leo Amery in 1940.

Whether or not love may be blind, self-love most certainly is. It is also deaf in not recognising the difference between the two greatest political orators in the English language and his tweets. Those tweets, which are as insulting to the English language as they are to the targets of his vituperation who dare speak truth to lying power. I acknowledge that some see him as a great communicator because he manages to engage and distort the ignorance of just under 25% of those Americans entitled to vote (who are not deplorables until they ingest his bile). While I do acknowledge that he was a successful Reality TV Host. But nothing is less real than ‘Reality TV’. And however unreal politics may be, I have three reasons for defying that mantra. First, he only manages to get away with his lies because Fox News either supplies or repeats his lies rather than subjecting them to even the most basic scrutiny. Secondly, his party has engaged in the kind of gerrymandering, voter suppression and campaign finance that only those who know they will lose a fair political contest would contemplate. And third, the acknowledgement that he is a good communicator is akin to saying that the KGB assassin is a good shot.

Unfortunately, his self-love is only dumb in the colloquial sense of being stupid rather than the physical affliction that would save us from having to hear him.

If we try to turn to the substance of his policies, we would make what Gilbert Ryle would call a ‘category mistake’ because he is not driven by policy let alone strategy. His actions are driven by his ego and nothing would boost his ego more than being re-elected. This means that he will take enormous risks to get re-elected. This does not mean that his policies do not have consequences – most notably because the risks are borne by others and the benefits are designed to accrue to him, his funders and those like them.

Far from being a great war-time leader who helped to unify the country in times of great strife, Trump combines many of the characteristics of failed war-time leaders. He is like so many revanchist leaders who want to make their country great again, puffing up their chests to accommodate their bellies, and their egos, and to cover up their incompetencies. He makes exaggerated promises, exploits those who support him and is keen to use physical force against his countrymen when they wise up to him.

One could go on to compare the failings of failed war leaders with those of Trump but I will dwell on just one famous one. He dealt with dictators, thought he understood them and thought he could make deals with them. He was unprepared for the conflicts into which he fell, did too little too late. I do not want to be unfair to Neville Chamberlain and must acknowledge he did not share the failings highlighted above.

Chamberlain’s interactions with dictators were based on his attempts to limit the adverse effects of their rule rather than to emulate them. Indeed, in comparison to Trump, poor Neville appears positively Churchillian in both word and deed. But by May 7 1940, it was clear that Chamberlain was a failed war leader. After discussion with other members of the ruling conservative party and discussions with the Labour Party about the formation of a national unity government, Sir Leo Amery rose to his feet in parliament and delivered a speech excoriating Chamberlain, concluding with the immortal 300-year-old line that had lost none of its power:

“You have sat too long here for any good you have been doing. Depart, I say, and let us have done with you. In the name of God, go.”

Of course, it was not the speech that forced Chamberlain out. It was the loss of most of his majority and the confidence of his colleagues. The USA is in desperate need of its own Sir Leo Amery – working to eject a failed leader and form a national government with the best of those from both sides of politics who will work together to deal with what are, admittedly, lesser woes.

Of course, Sir Leo Amery was operating in a ‘Westminster system’ in which prime ministers can be easily ditched, with the members of their parties acting as a permanent electoral college who can unelect PMs as easily as elect them. Getting rid of a president requires either impeachment or a majority of cabinet finding him incapacitated before he sacks them).

It is one of the great ironies of comparative constitutional history that the American founding fathers read far too much Montesquieu (a French would-be reformer who thought the British constitution involved a tri-partite separation of powers) and rebelled against the Union of England and Scotland at a time when the English monarchs were more powerful than they had been for a century and much more powerful than they would ever be again. George III’s three predecessors (Anne, George I and George II) had left affairs to their prime ministers.

George III tried to buck the trend and sought to regain control of the parts of the crown we now call the executive. He botched that and, after the ‘loss’ of the American colonies, was forced to accept that the prime minister would run the government and be chosen by the House of Commons and not by the King.

While the US Constitution involved many good ideas (including federalism and an entrenched Bill of Rights) it produced a president, with similar powers to George III and his prime ministers combined. The President is both head of state, head of government and Commander in Chief. He could not be removed by the lower house or his colleagues who controlled that house.

He could only be removed by the older parliamentary practice of impeachment which required a finding of wrongdoing rather than merely a loss of favour. This ‘Presidential System,’ involving a combined head of state and head of government that is difficult to remove, is extremely dangerous because it allows the Head of Government to avoid parliamentary scrutiny and wrap himself in the flag. It is so dangerous that no other nation has remained democratic for more than 50 years (France has lasted 63 years but is a mixed system).

But the US Constitution does offer a way if there is a will.  Forming a national government is actually easier. Cabinets have often included members of the party opposed to the president – including, in the early years, the vice president. If Trump were impeached (or if impeachment and conviction were certain as they had been with Nixon), Pence would become President and could nominate a Democratic vice president which would be approved by both houses under the 25th amendment and it would be agreed that neither would seek election but would concentrate on the massive issues they face.

Getting rid of the president is much harder. But Republicans came to the conclusion that Nixon had to go – to the point that Nixon knew he had to resign. And one Republican senator voted to convict Trump – making Senator Mitt Romney a potential Amery – unfortunately without the backing of sufficient colleagues or the ability or willingness to mobilise them. Secretary of Defense Esper has gone a little way to doing an Amery, and retired generals Mattis, Powell and Allen and all living ex-presidents have been openly critical (there are no reliable polling methods for non-living ex-presidents but some ultrasounds might pick up their turnings in their graves).

What will shift the 20 Republican senators needed to secure Trump’s impeachment? I would not rely on principle or Pauline conversion. Fear of long term damage to their party and future re-election might motivate provided it was greater fear than their fear of Trump’s retribution – though the greater the chance of the former, the weaker is the threat of the latter. And if Republicans cease to fear Trump, there is a good chance that their former loathing of him will rekindle. Those who lavish too much love on themselves rarely inspire the love of others.

There were other shifts in 1940. One of the more notable was the change of mind by Lord Beaverbrook whose papers had supported appeasement but recognized the folly and fully backed Chamberlain’s successors. Is it too much to hope that Murdoch might have the foresight to do a similar flip? He likes to think he changes governments though it may be that he runs with the way he thinks the tide will go, especially in relation to Labour, Labor and Democratic parties. I for one would be happy to throw a retirement party for that prodigal grandfather.

When the seriously or undiagnosable mentally ill were institutionalised, it was apparently common to have a number of those who claimed to be Jesus Christ or Napoleon. I don’t know how many saw themselves as Lincoln or Churchill. De-institutionalisation of mental hospitals was right in principle but often deeply flawed in practice. But the most seriously ill still needed to be put in institutions until their conditions could be stabilised – no one suggested that the White House was a suitable institution for such sensitive psychiatric work.

The other great American political wordsmith of the English language is Thomas Jefferson. His most chilling words refer to America’s treatment of slaves. Those words are emblazoned under the dome of Jefferson’s memorial, a mile south of St Johns Episcopal Church, in letters large enough for Trump to read, if not comprehend: “I tremble for my country when I reflect that God is just; that his justice cannot sleep forever.” I doubt that there is room in Trump’s moral universe for both God and his ego. But those Republicans who take bibles and churches seriously should remember those words and at last provide justice to black Americans. They could send him a colouring-in book of the Constitution but joining the first Leo Amery to raise his head would be more constructive. 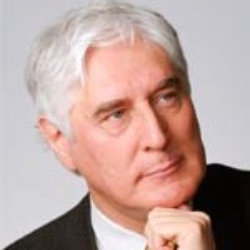