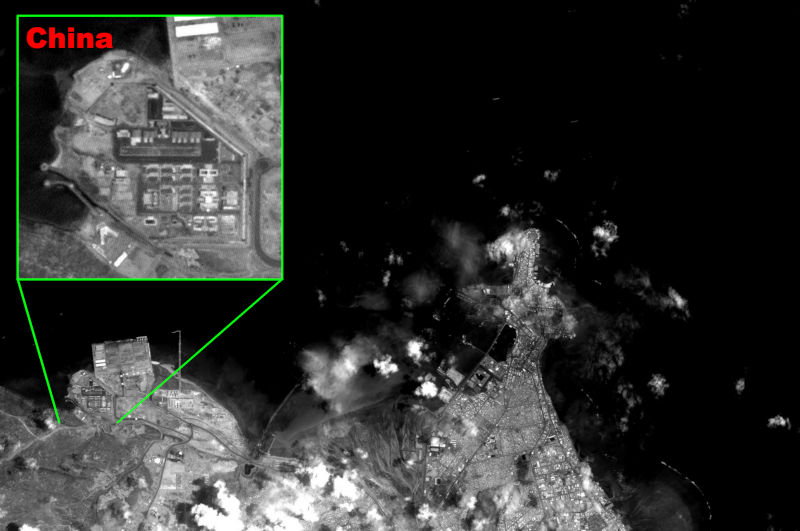 Djibouti is definitely a Chinese military base. There are about 2,000 Chinese troops. Image: Wikimedia Commons

China’s military expansion is modest .It was recently reported that there are now four Chinese military installations outside of China’s borders and Wikipedia was used to support the claim.

Wikipedia is a great source of general information but can’t be trusted as a source of facts. Academics will not cite the website as a source but may use it to find information and then double check, drill down to find the primary source and then cite that. Wikipedia does indeed show that there are four Chinese military bases.They are in: Djibouti; Myanmar; Pakistan and Tajikistan

Compared to the USA, China is a fledgling, even if they are proven to have 4 military bases around the world, take a look at the locations.It’s pretty clear to see that these locations, in terms of world threats, with the exception of the Horn of Africa where much of the world’s shipping passes through, aren’t all that strategically important. Tajikistan, a land-locked region consisting of mountains and goats. Pakistan, shadowed by the military might of its much larger Indian neighbour and a tiny island 300 miles off the coast of Myanmar with a population of 1,200 people, famous for, and named after coconuts.

Compare these to the might of the United States which, since 2011 has closed more than 1,000 military outposts and several bases in countries like Iraq and Afghanistan. At last count the number still sat in the region of 750 bases in more than 80 countries. There are only 195 countries in the world. Therefore 41% of them have known US bases but this doesn’t count the number of places where troops operate without telling the world they are there such as Taiwan, where they recently admitted to having special forces training local troops and, of course Ukraine where there are no bases but it would be naïve to suggest there are no “advisors” there. Troop numbers base overseas vary and, of course are nebulously reported by the Pentagon but are believed, according to expert analysis, to be between 150,000 and 200,000. We’ve also recently learned that there are hundreds of US biolabs managed by the US Department of Defence, these are not usually staffed by military personnel so, aren’t counted as military installations but draw their budgets and operating costs from Defence.

Djibouti is definitely a Chinese military base. There are about 2,000 Chinese troops because China went there in 2017 to help mitigate a global problem. A large proportion of the shipping passing the Horn of Africa is Chinese in origin and a lot of it was being pirated by Somalian pirates who weren’t being stopped by the permanent US military base there, Camp Lemonnier. The US had setup this base and been operating against an increasing number of piracy incidents since 2001 but seemed ineffective in preventing or even reducing the piracy. There were literally hundreds in previous years which have now reduced to a trickle. According to one leading expert: “Even though they operate independently, PLAN (People’s Liberation Army Navy) forces have continuously cooperated with the other task forces and are a major reason why piracy has decreased in the region”.

Also worthy of note, but the subject of another article elsewhere is the poverty alleviation programs China has put into place, with investments in billions providing for water pipelines, railways, ports and airports. Although these are often decried as debt traps the benefits to the country receiving them are enormous and seem to override issues local politicians have with the restrictive practices of organisations such as the World Bank and the International monetary Fund (IMF). And, if we were honest, providing jobs for pirates with a decent income is surely a better way of preventing further incidents than chasing them back to their hidden coves. It’s highly unlikely that people living in the Horn of Africa actually set out wanting to become pirates. Poverty has forced them into it. The complaints seem to come from the international finance community, who are now missing out on lucrative loan deals, a lot more than they come from the benefiting countries. Like China’s military expansion, China’s debt trap seems like a myth.

Myanmar is a different story. About 20 years ago, it was widely reported in military circles, based on reports from India’s Military Intelligence, that China had an intelligence gathering base in Myanmar, on Great Coco Island, 300 miles off the coast. It’s been so widely and so often reported that, according to the Irrawaddy Newspaper, people now believe it’s true. What isn’t widely reported is that both Myanmar and China denied this for many years and the Myanmar military invited the Indian Military to visit the island and see for themselves.They declined. There are no official records in either China or Myanmar of China being given permission to maintain a military base either so, if it is there, it must be very secret. However, in 2005, Myanmar and India signed an agreement to allow Indian Intelligence gathering flights to cross the island. Two months later, according to the Irrawaddy, the Indian Chief of Naval Staff admitted they was no evidence of any Chinese military base on the island. Yet rumours still persist, Wikipedia still posits it as a fact and some even allege it was there but it’s moved. Perhaps it’s time for the Indian navy to take up that invitation to visit!

Moving to Pakistan which does indeed have a Chinese invested deep-water port in Gwadar, one of only two in the country. China’s investment amounts to $248 million in the first phase of development of a total investment of $1 billion. But is this a military port? The answer is no, but it could be. It’s actually set up to be a Freezone port allowing development of tax free, or favourable tax policies in order to capitalise on trading with Pakistan’s manufacturing and service industries and yes, China is investing heavily in Pakistan.There’s a Free Trade Agreement and, what was described as recently as this week as an Iron-Clad friendship between the two countries. Once again this “military installation” has no military presence but is considered, by India to be a threat. So, if you read about a Chinese military port in Pakistan, it’s worth taking a look at the source and you’ll probably find it’s a great story full of suggestions about what might happen rather than the realities of what is happening. Such as this article in the Republic World ezine.

Which brings us to the final place that China has apparently militarized; the landlocked, mountainous and poverty-stricken, neighbouring country of Tajikistan. There is no doubt at all that China would be well served by having some security presence here.It is a region in crisis. It borders China’s troubled Xinjiang and has a difficult border to police. It also shares borders with Afghanistan where it serves as a corridor for refugees as well as potential terrorists and opium smugglers.

What Beijing has done to help the country, at the request of the country’s president, Emomali Rahmon, is build, but not staff, a police station near the border. Obviously, a poor country such as Tajikistan would have problems if there were instability in a neighbouring country and just such a thing happened in 2021 when Afghan troops, abandoned by their American counterparts, fled the country over the nearest borders.At least 1,000 of them arrived in this region of Tajikistan.

Once again, we see suggestions and allegations, even from HK’s South China Morning Post that China could, China might or China is suspected of, but never that China has expanded into the region. China’s alleged good deeds being misinterpreted, perhaps deliberately so, as military expansion.

We can leave it to the reader to make informed decisions on whether China’s military expansion into the Horn of Africa is a good or bad thing, but tens of thousands of mariners and their families are happy to see them there. As are the insurance companies which were paying millions in ransoms to get their ships and crews released and the President of the country, as well as his citizens seem ok with it.

The other three sites Wikipedia claims are threats to world peace are only threatening in the minds of people who assume that China has some intent which has never, at any time in modern history, manifested itself as real.