CHRIS SHEIL AND FRANK STILLWELL. Bad data collection means we don’t know how much the middle class is being squeezed by the wealthy

There is a glaring need to reform Australia’s archaic wealth inequality statistics to make them commensurate with international practice.

Australia is falling behind other nations and international bodies in measuring inequality, particularly the concentration of wealth. This also means we are in the dark about the trends affecting Australia’s middle class.

The main source of local data is the Australian Bureau of Statistics (ABS), which publishes a Survey of Income and Housing every two years. The survey provides no information on the wealth of Australia’s top 10%, let alone the top 1% or the top 0.1%. Nor does it quantify the bottom 50%.

The ABS also publishes an index known as the “Gini coefficient”, but as the recent World Inequality Report points out, this indicator can produce the same score for radically different distributions of wealth and downplays the distribution’s top end.

Studying the different groups (such as the top 10%, the middle 40% and the bottom 50%) has become standard in the flourishing international literature on inequality. It has also been embraced by international agencies such as the Organisation for Economic Co-operation and Development (OECD), the International Monetary Fund, the World Bank and increasingly, the United Nations.

As a sign of how far Australia has slipped behind, when we reported on wealth inequality in 2016, we had to draw on data for the top 10% that the ABS had supplied to the OECD but which were not published here in Australia.

Why looking at the middle class matters 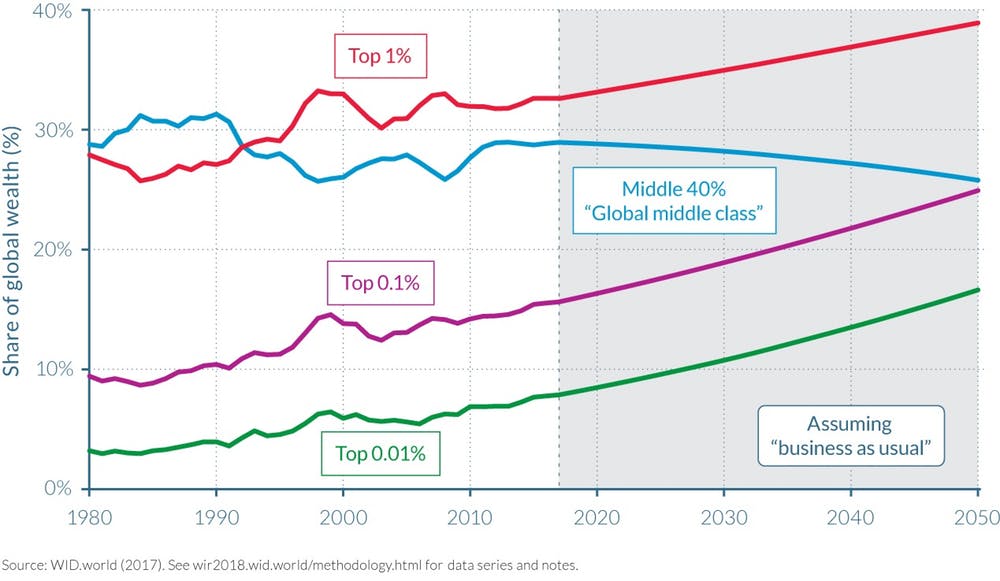 The World Inequality Report finds that the share of the world’s wealth owned by the richest 10% of adult individuals is now over 70%. Meanwhile the poorest 50% of people owns under 2% of the total wealth. This is extreme economic inequality.

Changes in recent decades have been driven by a surge in wealth accumulation at the very top of the distribution. Worldwide, the wealthiest 1% now owns 33% of the total, up from 28% in 1980. In the United States, the top 1% share has risen from a little over 20% to almost 40%.

This is not a simple story of growing extremities between the global rich and poor. On the contrary, the wealth-share of the bottom 50% has barely changed since 1980.

This means the rise in the top share has come at the expense of that held by the middle class, defined as the 40% of people whose wealth-share lies between the median and the top 10%.

This middle-class squeeze is a long-established trend. The wealth of the top 1% exceeded that of the middle class in the early 1990s, and is projected to reach almost 40% by 2050.

Most gains have accrued to the top 0.1%, a tiny elite whose wealth is projected to equal that of the middle class around the same year. This crossing point has already been reached in the United States, where the top 0.1% now has about the same wealth-share as the bottom 90%.

There is a glaring need to reform Australia’s archaic wealth inequality statistics to make them commensurate with international practice. The political implications are significant.

If there is a squeeze on middle-class wealth, as is happening in many other countries, it is likely to create greater political volatility. Access to more and better data is the key to understanding the trends, and will help ground debate, deliberations and policy decisions. The ABS’ household survey needs to be restructured and integrated with the national accounts and, ideally, tax data.

Perhaps the current Australian government, responsible for funding the ABS, is unconcerned. In that case, it is worth remembering that the ABS is charged with servicing both the Commonwealth and the states, most of whom transferred their statistical agencies to the national body in the 1950s on the understanding that their data requirements would continue to be met. The limitations in the existing data hinder the ability of the states to frame policies for their vital housing, education and health services.

The Council of Australian Governments could be a suitable forum to advance reform, particularly in the event of continued federal inertia. Alternatively, given the revolutionary advances in data collection since the 1950s, it might be feasible for the states to again think about establishing their own statistical agencies to ensure their needs – which is to say, our needs – are properly met.

This article first appeared in The Conversation on 20 December 2017