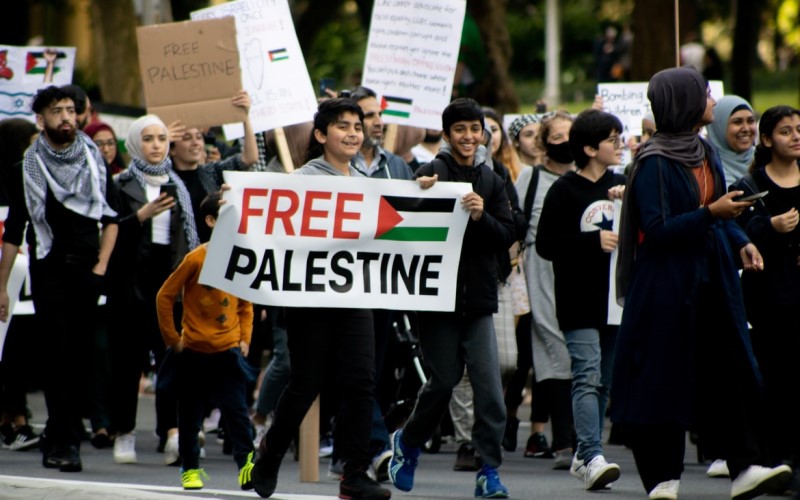 In the spirit of Christmas and with a touch of courage, the Israel lobby should be shunned and the malicious treatment of Palestinians condemned.

The Christmas period may herald hope and generosity, but in response to Israeli variants of cruelty to Palestinians, Christmas spirit is far away, unimaginable cruelty is denied, powerful people don’t want to know what is happening, or don’t seem prepared to find out.

Revelations about the cruelties start with Israeli human rights B’Tselem’s reminder that as of November, mostly for throwing stones at military vehicles, 157 Palestinian children languish in Israeli jails, the only youngsters in the world prosecuted by military courts. But this is Israel, allowed to act with impunity.

Save the Children’s survey of 470 West Bank children jailed during a 10-year period showed they were taken from their homes at night, blindfolded, their hands bound behind their backs. The report concluded that the children faced beatings, strip searches, psychological abuse, weeks in solitary confinement and during interrogations were denied access to a lawyer. Who cares? Israel’s barbarity should not be questioned.

A November Al Jazeera inquiry into Israeli soldiers’ invasion of Palestinians’ homes shows the consequences of racist attitudes towards a people treated as of no consequence, merely targets for humiliation and abuse.

Al Jazeera journalist Andrew Mitrovica refers to a report “Life Exposed”, about an early morning invasion of homes in south Hebron, which soldiers acknowledged was conducted arbitrarily and without a court issued warrant. Soldiers traumatised children, took photos as a record of their conduct, though one soldier admitted, “My mother would be ashamed if she knew what we did.”

In no way does that glimpse of shame lessen the psychological harm inflicted on Palestinian children and their families.

In their preparations for Christmas, and perhaps while pondering new year resolutions, Australian politicians and journalists might contemplate the astounding finding that while lifetime prevalence of post traumatic stress disorder in children ranges from 6.8 per cent to 12.2 per cent world wide, among Palestinian children living in the West Bank, those rates are estimated to be 34.1 per cent to 50.4 per cent. Who cares about such figures? They refer to blighted families and their children. This is normality. Take the cruelties for granted.

In Israel right or wrong circles, records of abuses of Palestinian children may be dismissed, but accounts of Israeli settler violence recorded in the conservative Jerusalem Post should be more difficult to deny. Experienced Israeli journalist Gershon Baskin has described apartheid based terrorism towards Palestinians and their Israeli human rights supporters. Descending from their illegal settlements, faces covered in masks, carrying staves, clubs, pepper spray and guns, the settlers attack shepherds, farmers, olive trees, homes and water wells and do so under the protection of Israeli soldiers.

Australian citizens who may have no interest in knowing this violence live under rules of international law and could judge an Israeli government’s determination to ethnically cleanse Palestine, or outlaw a people.

Ask the attorney-general or her Labor shadow if they are familiar with the 4th Geneva Convention relative to the protection of civilians in times of war. That Convention prohibits violence to life and person, murder of all kinds, mutilation, cruel treatment and torture; it adds that an occupying power is directly responsible for the security and safety of occupied people. Really?

Contrast those rules with soldier sadism towards children, settler viciousness to Palestinian farmers and shepherds, and be aware that illegal settlers, protected by the military, act on behalf of the Israeli government. Baskin says this is terrorism, the policy of an apartheid government.

In spite of such evidence, it is unlikely that leaders of Labor and Liberal political parties will express outrage at Israeli human rights abuses, at policies nurtured by indifference to international law. If a leading member of the Labor Party can enjoy rewards as a lobbyist for Israeli arms manufacturer Elbit, if a former Liberal foreign minister can claim no law prohibits Israeli settlements on stolen land, what hope for struggles towards common decency and higher standards of justice in 2022?

That struggle requires awareness of variants of cruelty, but even wanting to know of such violence is discouraged by fear of offending a powerful Zionist lobby.

In the spirit of Christmas and with a new year touch of courage, this lobby should be shunned, the malicious treatment of Palestinian children and the savagery of settlers publicised and condemned. Surely not too much to ask?