Climate change and the impact of humans – A graphical perspective

The recent report by the IPCC (the United Nations Intergovernmental Panel on Climate Change) is ‘code red for humanity’ according to the UN Secretary-General. This warning is a timely reminder to review the role of humans in global warming due to rising greenhouse gas pollution.

The role played by GHGs (greenhouse gases) in trapping solar energy in the atmosphere has been increasingly understood since the 19th century.

Carbon dioxide (CO2) has recently reached a concentration of 417 ppm, a 50% increase on the pre-industrial level of 278 ppm. Current, and projected future concentrations are higher than anything experienced on Earth for many millions of years, well before humans were present. Although our species survived recent ice ages, those climatic changes occurred gradually over many thousands of years, and human societies, being hunter-gatherers, were free to move and adapt, enabling them to survive.

Without strong action to reduce the levels of GHGs in the atmosphere, we would be facing an average temperature rise of around 4 degrees over pre-industrial levels by the end of this century, an unprecedented rate of change. The world for humans and our flora and fauna is rapidly becoming a different place.

Following are useful graphs that clearly illustrate the role of humans in creating the catastrophe of global warming, notably over a period of only 270 years.

Since the industrial revolution began around 1750, the world’s population has grown dramatically. There has been steady increase in wealth, largely due to significant productivity improvements from industrial and technological change and the harnessing of energy from fossil fuels. At the same time there has been a steady improvement in health and life expectancy, corresponding with progress in science and medicine. This means we all have more and we have more people wanting more and more.

The Our World in Data website explains that the world population today is 1,860 times the size of what it was 12 millennia ago. The world population then was around 4 million, just twice that of Perth. Almost all of this growth happened just very recently. The world population in 1750 is estimated at about 800 million. It was about 1 billion in 1800 and has increased more than 7-fold since then, reaching 7.79 billion in 2020. It has grown by 1 billion about every 12 years since 1960. It is forecast to reach 9.74 billion by 2050.

This link takes you to an interactive graph displaying the growth of the world’s population over those 12 millennia, since 10,000 BC. The following graph illustrates the section showing the world population growth from the start of industrialisation in 1750 and includes extrapolations to the end of the 21st century. 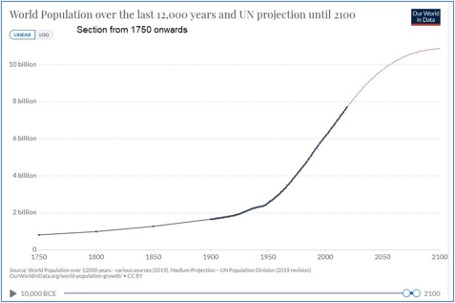 The really scary graph is this one, population growth since 10,000 BCE. 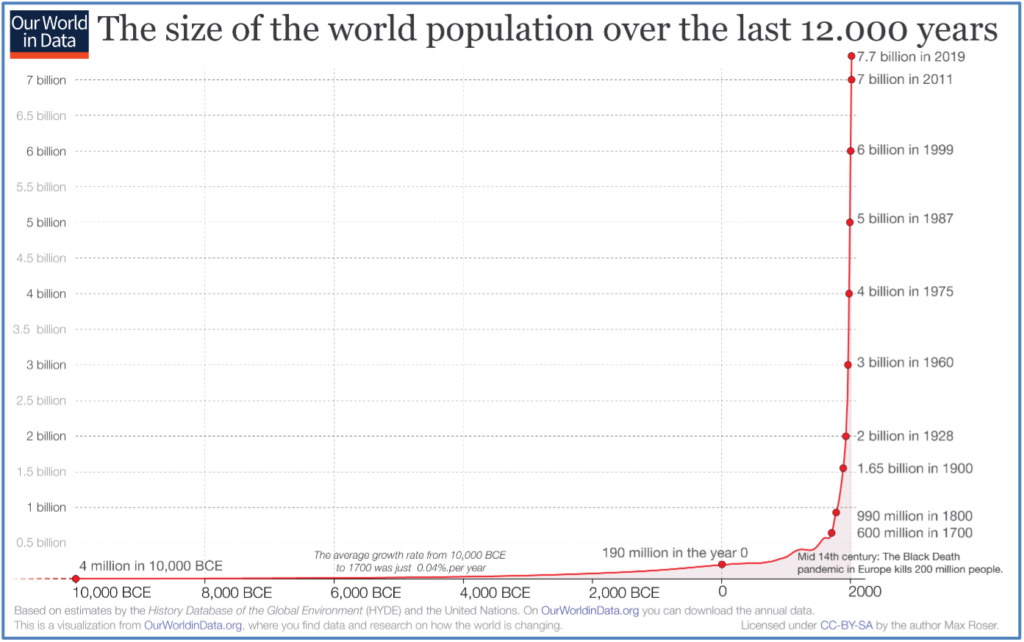 Along with population growth, and increasing wants and wherewithal, came increasing energy use from burning fossil fuels, land clearing, agriculture and other practices that resulted in growing greenhouse gas emissions. Carbon dioxide (CO2) is the main problem, but it is not the only greenhouse gas to worry about, with methane and nitrous oxide being the next most important.

The Our World in Data website includes the following graph on annual CO2 emissions. It illustrates the rapid rate at which CO2 has been released into the atmosphere by human activity, mainly from fossil fuel combustion. Emissions of other GHGs have grown at a similar rate. 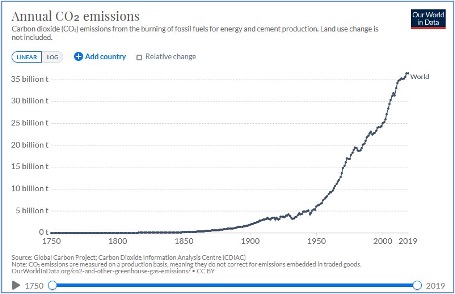 We note that the problem is cumulative, in that GHGs build up in the atmosphere, meaning that emissions are accumulating faster than they are removed through the natural carbon cycle: they become increasingly concentrated and, like a greenhouse, trap heat. The Our World in Data website includes a remarkable graph with illustrates the growth in atmospheric CO2 concentrations.

From that link you can see the concentrations back to 800,000 years ago and the large fluctuations between the various ice ages, some lasting tens of thousands of years. This graph below is a snapshot and shows the movement since 6,000 BCE. It includes lines showing the maximum and minimum CO2 concentrations ever recorded during glacial and interglacial periods. Add in concentrations of other GSGs and the implications are even more bleak. 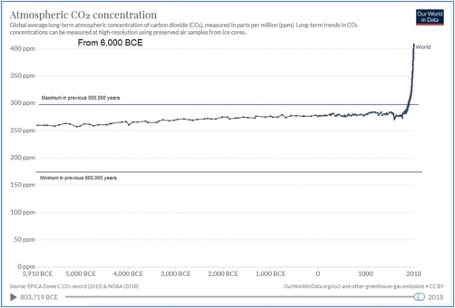 We can clearly compare the current carbon dioxide (CO2) concentration of 417 ppm to the pre-industrial level of 278 ppm.

Having reached this point, there is no going back – once the gases have built up, they are there to stay, at least for centuries. Thus the best humans can do is stabilise the concentrations of GSGs in the atmosphere.

The next chart shows the movement in global temperatures since 1850. It uses the 1961-1990 average temperature as a base and we see that temperatures were generally lower than for 1961-1990 in the 19thC but have been generally higher from the 1980s. 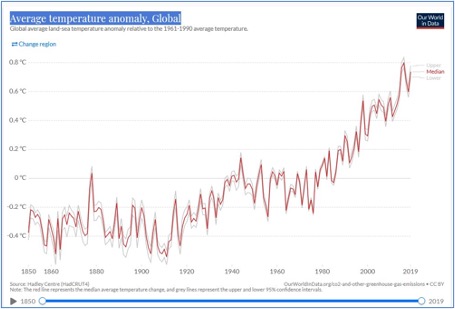 The correlations between the key variables – population growth, energy use, GHGs emissions and global temperatures – are undeniable.

The catastrophic effects of increasing temperatures are well known. Given that the world’s population is destined to grow for some time, it is critical that per capita GHGs emissions are reduced. Moreover, total emissions must be reduced dramatically to transition to net zero by 2050.

Here is a link to an interesting graphic which scrolls through a timeline of Earth’s average temperature since the last ice age, noting key events in time along the way. The invention of the steam engine shows the start of the upward trajectory in the following three centuries.

Temperatures in Australia have followed the world pattern

The CSIRO has a very useful website about Australia’s changing climate. It includes the following:

“Australia’s weather and climate continues to change in response to a warming global climate. Australia has warmed by just over 1°C since 1910, with most warming since 1950. This warming has seen an increase in the frequency of extreme heat events and increased the severity of drought conditions during periods of below-average rainfall. Eight of Australia’s top ten warmest years on record have occurred since 2005.” 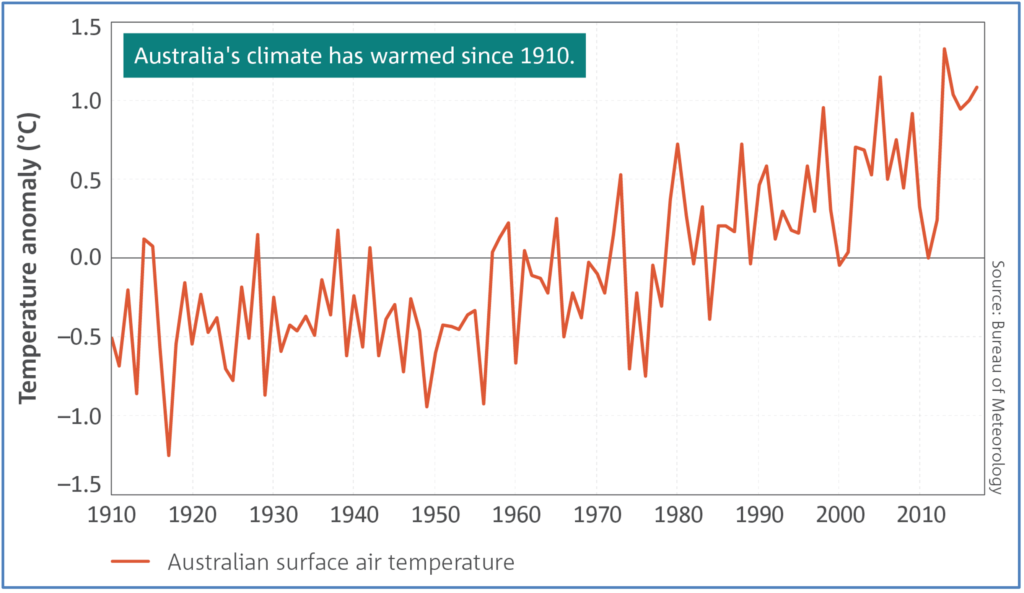 Along with temperature gain, we can show graphically that there has been an increase in the frequency of extreme weather events: heatwaves, rain and floods, droughts, fires and cyclones. 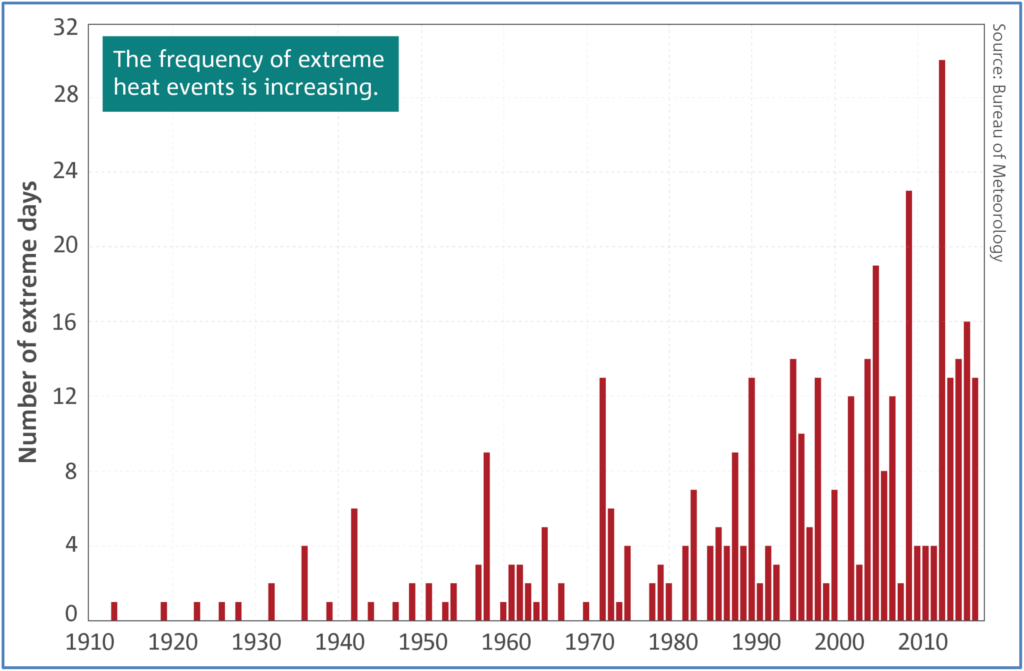 And we need to mention sea level rise too. The Age recently ran a feature entitled “Beach erosion in Australia: 10 iconic beaches that are disappearing”. It included the following:

“According to Nature Climate Change, Australia is the country most affected by beach erosion. It estimates 11,426 kilometres of coastline are threatened, and 40 per cent of beaches might be lost.”

Kingscliff Beach in northern NSW is one of hundreds under threat.

Australia clearly has much at stake if global temperatures are not reined in. Our decision makers, and doubters in their midst, need to take heed. 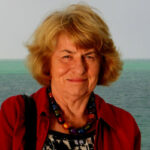