Colin Powell: Establishment warrior with a taste for regime change 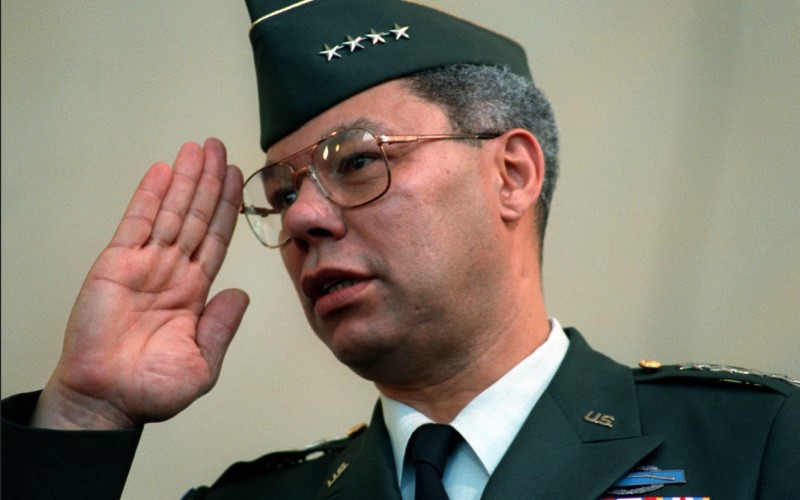 Former US Secretary of State Colin Powell, who died this week, was a man fully enrolled in the service of regime change and making the case for it.

History is strewn with the broken branches of twisted irony. An individual who found himself entangled in it was the late Colin Powell, who, as a military man, gave a doctrine his name only to forgo it as a diplomat.

The Powell Doctrine was one of certitude and caution: do not engage in conflict except in conditions whereby you could bring overwhelming and decisive force to bear.

Political goals had to be clear; hostilities would be brief. There would be no more quagmires, no more Vietnam Wars for the US imperium. The model for this was his first engagement with Saddam Hussein’s forces in 1991. The other manifestation of this approach was opposing military intervention in Bosnia.

Such ruminations were reached after service in Vietnam, where he made his mark as a major who questioned the account of the My Lai massacre.

Tasked with providing the first response to the Pentagon’s queries spurred on by Ron Ridenhour, he showed an all-establishment view to the butchering of over 400 villagers, questioning the complaint against Charlie Company as vicious rumour mongering.

The chairmanship of the Joint Chiefs was only logical in the scheme of this alignment, granting him an almost panoptical view of military-intelligence operations. He directly supervised the teachers of torture from the School of the Americas and learned the importance of keeping the death-squads in the service of US power at arm’s length.

Ridenhour conveys this point with gruesome precision: “Just keep those big, burly, white American advisers far enough away from the actual mayhem so that they will never be seen splattered with blood on the evening news.”

His briefings during the 1991 Gulf War were famed for being direct and free of jargon. It stood to reason. The Vietnam War, for the likes of Powell, had been lost not only because of unclear goals but because of a failure to control army-media relations.

Through the 1990s, he had a certain pop allure that drew him towards a possible tilt at the White House. He had mastered military greatness and could now be readied as an Ike-redux.

Under heavy spousal pressure, he gave up his bid for office. Alma Powell had threatened to leave him in the event of him running, fearing potential assassination from a racist’s bullet. At the time, Christopher Hitchens recalled those “dinner-parties that turned into unspeakable cafard; the TV and radio chat-shows that went null at the mention of his name”.

Slotting into the role of US Secretary of State in the first administration of George W. Bush, he was billed the voice of sane moderation in a cabinet of hawks, the wounds of September 11, 2001 still bleeding. The military man could still make his mark, despite pretending to prefer ploughshare to sword.

Prior to him taking the reins at the State Department, he had been mocked by his predecessor, Madeline Albright, who always had a touch of the war monger about her.

“What’s the point of having this superb military you’re always talking about,” she chided him with a bloody craving, “if we can’t use it?”

Albright had been a critic of the qualifications suggested by the Powell Doctrine, calling it archaic before it even came into practice: “You know, Gen. Powell wrote a book and one of the problems with writing a book is that it takes a while to get it published.” She found it “probably ironic that just at the time that this [book] came out, in fact, the limited application of limited force in Bosnia was working”.

Powell would have done his critics proud in abandoning his own doctrine, demonstrating that ideas are there to be vanquished and burned, even by their own creators. The moment he did so remains dark folklore, a poison of statecraft.

With the Bush administration enthralled by the prospect of war in the Middle East, having marshalled themselves against evidence more counterfeit and conspiratorial than Donald Trump ever could be, Powell played along with gusto. This heralded a conversion from remarks made in February 2001 that Iraq’s Saddam Hussein “has not developed any significant capability with respect to weapons of destruction. He is unable to project conventional power against his neighbours”.

His infamous February 2003 address to the UN Security Council accusing Iraq of having weapons of mass destruction was another effort at public relations but of a very different quality. It proved to be free of accuracy and unburdened by reality, despite Powell’s own vetting efforts of the evidence.

This was a man fully enrolled in the service of regime change and making the case for it.

Every statement, claimed Powell, was “backed up by sources, solid sources”.

They were “not assertions. What we’re giving you are facts and conclusions based on solid intelligence.”

The theatrics were ample: “Let me remind you how ricin works. Less than a pinch — imagine a pinch of salt — less than a pinch of ricin, eating just this amount in your food, could cause shock followed by respiratory failure. Death comes within 72 hours and there is no antidote. There is no cure. It is fatal.”

This was heavy going, given that such solid intelligence had been gathered from the quicksand sources of the Iraqi National Congress, a notorious outfit of exiles led by the oleaginous Ahmed Chalabi.

Powell’s chief of staff Lawrence Wilkerson noted how many “of these sources sort of tinged and merged back into a single source, and that inevitably that single source seems to be either recommended by, set up by, orchestrated by, introduced by, or whatever, by somebody in the INC.”

The Secretary of State also ran with the al-Qaida-Iraqi connection, another spurious link manufactured in the aftermath of 9/11 linking the terrorist attacks to Baghdad: “Iraqi officials deny accusations of ties with al-Qaida. These denials are simply not credible.”

His UN speech makes special reference to Abu Musab al-Zarqawi, suggesting that al-Qaida “affiliates based in Baghdad now coordinate the movement of people, money and supplies throughout Iraq for his network”.

Powell spent subsequent years calling his presentation “painful”, a “blot” that would “always be part of my record”.

But ever mindful of public relations, he could find other more worthy alibis for his conduct. Blame could be saddled and pinned down elsewhere — for instance, upon the more nefarious Donald Rumsfeld. Or the devious Vice President Dick Cheney, whose office authored the speech.

For those keen to confine the scope of Powell’s errors and assessments, it is also worth remembering that the taste for regime change did not stop with the placing of boots in Mesopotamia.

As chair for the Bush’s Commission for Assistance to a Free Cuba, Powell oversaw the production of a 2004 report advocating various ways the Cuban government might be overthrown. These were familiar: insinuating market capitalism into the state; introducing multi-party elections; giving Cuban Americans living in the US restitution for losses suffered under the Castro regime.

Accordingly, Washington should “support the Cuban people as they … work to transform themselves” and enable them “to develop a democratic and civic culture … and the values and habits essential to both”.  Such mindful benevolence.