Colombia’s Strongman from Hero to Criminal

Today, violence in Colombia is once again spiralling out of control.

The most influential political figure of the last two decades in Colombia has by far been Alvaro Uribe Velez, president during two periods, 2002–2010, and Senator since 2014. His contribution to bring the monopoly of violence under “state control”, at a time when communist guerrillas were at the peak of their power and controlled large swathes of the country, was enough for most to see him as a positive reformer.

At the time Uribe reached power, it was impossible to commute safely between the country’s two largest cities, kidnapping was rife and international tourism was at an all time low.  During his first term in office, Uribe’s policy of “democratic security” backed by the US military, achieved a significant reduction in the areas controlled by the guerrillas. Thanks to this, the country managed to grow like its peers during the commodities boom of the beginning of the century.

Against this backdrop, Uribe won his reelection bid in 2006 (for which congress had to amend the constitution) by landslide . But during his second period, more and more scandals started to surface. By the end of 2006 more than 30 congressmen and women who backed Uribe were being investigated by the supreme court for supporting paramilitary groups. In 2008, a congresswoman, who supported Uribe’s reelection bill, confessed having been offered a bribe for it. In 2009 congress was debating the fact Uribe’s sons turned a $15,000 into $1,4 M in two years, after having bought land in the outskirts of Bogota that local legislators soon declared a duty free zone. And the list goes on.

Although his coalition in congress approved a new amendment to the constitution to permit a second reelection, the constitutional court blocked it. However, granted Uribe’s support, his previous minister of defence, Juan Manuel Santos, won the 2010 election. Santos quickly set his own agenda focused on reaching a peace agreement with the guerrillas. Such decision turned his mentor into his most fierce opponent.

Why did Uribe oppose the peace talks since their inception? Did he foresee the outcome would be a special jurisdiction in which all actors of the conflict could confess their crimes to get reduced sentences? This appears the only plausible answer.

In 1980 a young Uribe obtained his first relevant post as public servant, heading the national airspace agency. His predecesor had been assassinated by the mafia. During Uribe’s time in office plenty of licences were conceded to drug lords for airplanes and helicopters and most notably, the airstrip in Pablo Escobar’s hallmark estate was approved.

Uribe is currently in home detention after an order by the supreme court that accuses him of committing acts of fraud, bribery and witness tampering and is also allegedly guilty for turning a blind eye on two masacres perpetrated by paramilitaries during his tenure as Governor.

A recently declassified memo of the US Department of Defense of 2004 shows a high-level official strongly suspected Uribe had a history of dealings with paramilitaries.

Like most Latin American elites, Colombia’s has historically exhibited high levels of corruption. What sets Colombia apart, making it one of the most violent countries in the world, is the fact since the late 50’s it had communist guerrilla groups, and since the early 80’s an extremely powerful drug mafia. The mafia, with its infinite cash in hand, integrated quickly with the country’s traditional elites, giving birth to some of the most brutal armies in modern history, paramilitary groups that defended their common interests against the guerrillas or any other political actor who defied them.

Having distanced himself from Uribe, Santos managed to get reelected for the 2014–2018 period on the promise of signing a peace deal with FARC EP that would put an end to more than six decades of conflict. He succeeded in this objective by mid 2016. By the end of that same year Colombia had achieved its lowest homicide rate in 42 years, Santos earned the Nobel Peace Prize, and The Economist named Colombia “Country of the Year”.

Despite such promising outlook, support for Uribe had not withered, and being “the one Uribe said” was enough for a young senator from his party to get elected president in 2018, once again campaigning against the peace treaty. Unlike Santos, Ivan Duque guaranteed obedience to his mentor, due to his very low public recognition and nonexistent chances of becoming president otherwise.

Today, violence in Colombia is once again spiralling out of control, with more than 60 massacres registered this year. In addition to the non stop assassination of social leaders, typically civilians who claim land or truth (as agreed in the peace treaty), or who want to participate in politics, oppose illegal economies or defend environmental causes.

As the graph below shows, Uribe has been quite successful in stalling the progress of the implementation of the peace agreement. 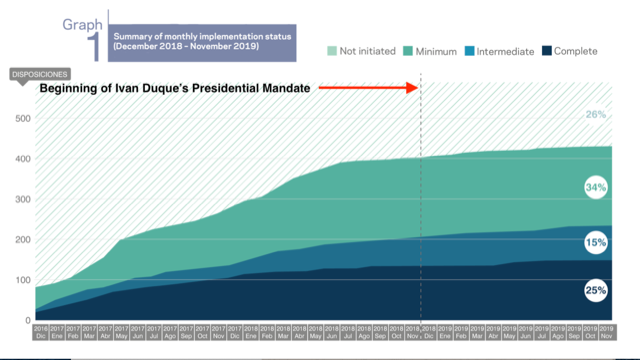 Source: Fourth Report on the Implementation of the Final Agreement in Colombia. Kroc Institute for Peace Studies.

Who are Uribe’s followers and why do they support him?

“Uribistas”, as they are known, have several things in common with followers of other right wing populist movements such as Brexit or Trump. Older age groups have a higher representation in this constituency. Uribe has also cunningly managed to convince conservative types of all ages that the opposition’s intention, regardless of their political hue, is to turn the country into a new Venezuela.

Religious groups, mainly evangelicals, are one of his strongholds and finally, against all evidence, the core of his base will deny any wrongdoing by their leader. while the less extremists will argue “what he did had to be done”.

Not the most fierce of his opponents expect Uribe to end up in jail while Ex FARC leaders are in congress. But as all other major actors of Colombia’s internal conflict, he should submit himself to the special jurisdiction created by the peace treaty and confess his wrongdoings. Doing this would be an unparalleled contribution to help the country turn the page on some of its darkest chapters in history. 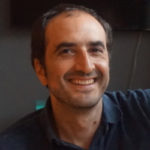