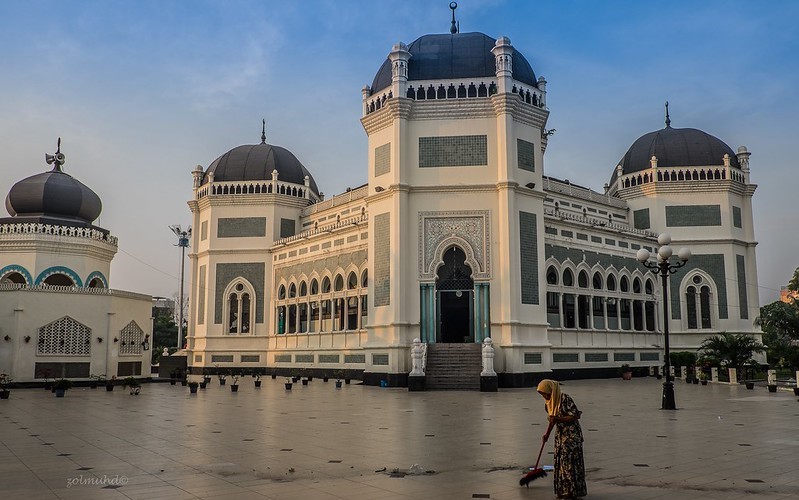 The Grand Mosque of Medan, Indonesia. Cathedral-size mosques better suited to cities are being built in villages. (Image: Flickr/zol m)

Indonesians like to visually pollute public places with banners. Those degrading the streetscape are usually advertisements for cigarettes, but on university campuses they carry practical information on enrolments and guest lectures.

The University of Brawijaya in East Java has more students than the universities of South Australia and Western Australia combined. Its green grounds have hundreds of pennants and streamers celebrating the institution’s upcoming 59th birthday, but only one warning staff and students they are entering an area free of sexual violence and bullying.

The sign was erected after Education, Culture, Research and Technology Minister Nadiem Makarim signed regulations to tackle sexual violence on campuses. One section prohibits “intentionally displaying one’s genitalia without the victim’s consent”. Another forbids “taking, recording, and/or circulating photographs and/or audio and/or visual recordings which have a sexual nuance without the victim’s consent”.

That all may sound reasonable, but not to the republic’s peak Islamic body, the Indonesian Ulama (Scholars) Council, or to the mass Islamic non-government organisation Muhammadiyah. They want the phrase “without the victim’s consent” deleted, arguing the regulation contradicts Indonesia’s religious culture by implying that sex is always acceptable if the parties consent. In their interpretation this legalises adultery.

(Similarly twisted logic is surfacing over the teaching of English. Puritans say learning the language should be limited to terms used in industry and employment lest students absorb Western cultural values and practices along with verb conjugations. The most feared infection from the Anglosphere’s vaults of vice is “free sex”. The puzzling phrase is always in English.)

Under Islamic law sex outside marriage is haram (forbidden) but that doesn’t mean the libido of Indonesians is any weaker than that of the rest of humanity. The nation’s birth rate is 2.3 children per woman. It was much higher until the government ran a major contraceptive campaign (two children are enough) last century.

In Indonesia there’s usually a way around the rules including those imposed by religions. Adulterers keen to satisfy their passion and retain their faith find corrupt clerics who “marry” them before their tryst and then offer a “divorce” the next morning – a system known as nikah siri (unregistered marriage). A pregnancy outside wedlock brings an MBA – “married by accident”.

While the government says it is trying to tackle sexual violence, it condones public floggings of unmarried or gay people caught having sex, along with gamblers and alcohol drinkers. As part of a 2005 peace deal between Jakarta and the separatist Free Aceh Movement, the province at the top end of Sumatra is allowed to enforce some aspects of shariah (Islamic law). Amnesty International Indonesia executive director Usman Hamid called the punishments “cruel, inhuman and degrading … disgraceful and ruthless – no one deserves to be brutalised and humiliated in this way”. In the past decade more than 500 people have been caned, including sentences of 100-plus strokes with reports of victims collapsing.

Until recently supermarkets in Java stocked lubricants and condoms, but these items have largely disappeared (although not in Hindu Bali) to appease conservatives who seem to believe the sight of contraceptives on shelves encourages sexual activity.

So far Makarim has refused to shift his position, although that may change as the Islamic heavyweights apply pressure. In February, Makarim, a Harvard graduate, initiated a joint ministerial decree banning public schools from making headscarves mandatory for non-Muslim students. After howls of protest and threats by conservatives, the Supreme Court revoked the ruling.

During a webinar last week, Makarim, who has been called on by President Joko Widodo to modernise the state’s creaking and crumbling education system, said he was trying to tackle “a sexual violence pandemic” on campuses, not legalise consensual sex. “The ministry does not support any acts that are not aligned with religious and moral norms. The regulation was designed to tackle a specific type of violence, which is sexual violence, with clear definitions,” he said.

His claim that tertiary education institutions are rife with sexual abuse is based on a 2020 department survey in which 77 per cent of lecturers said allegations of sexual violence had occurred at their universities, although most acts went unreported.

What’s also propelling Makarim’s initiatives are statements by courageous women following the Me Too movement in the West. The latest claim getting widespread publicity comes from a student at Riau University on the east coast of Sumatra, who alleges her thesis supervisor tried to kiss her in a closed office. When she complained to the department secretary, she said she was warned not to tell anyone.

“They laughed in my face about it,” she said. “There was no protection, no empathy for what I had gone through. They tried to protect [the lecturer] instead, without caring about what had happened.” So she made a video, posted it on Instagram and went to the police. The lecturer retaliated with defamation proceedings claiming 10 billion rupiah ($955,000) in damages.

Makarim’s regulation is supposed to force tertiary institutions to develop ways to handle allegations of sexual harassment or violence. The Riau University student’s lawyer has reportedly said the case could be a turning point for the implementation of the new regulation.

Andy Yentriyani, chair of the National Commission on Violence against Women, backs Makarim’s moves. Like the minister, she was also educated abroad – in London. Although the commission has so far received only 67 reports of sexual violence on campus, she said most cases were unreported or unresolved. “Victim blaming has been the biggest bottleneck as universities refuse to admit that sexual violation does happen,” she said.