Conservatives venerate January 26. Do they even understand how it happened? 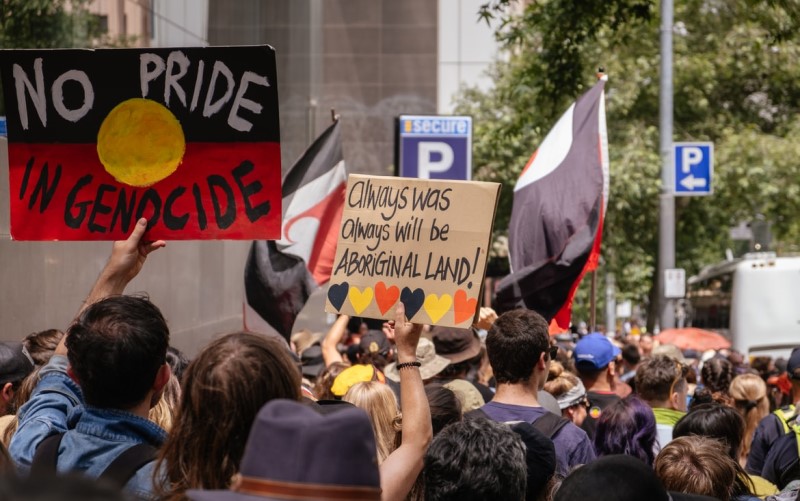 Terra Nullius has blighted our history ever since 1788 and still shapes the foundation of our legal system. (Image: Unsplash)

The British government knew almost nothing about Australia, assuming it was uninhabited and available to be exploited.

Dr Bella d’Abrera is the Institute of Public Affairs (IPA) director of the Foundations of Western Civilisation Program. In a public statement released last week she provided us with a lucid explanation of the institute’s strong support for maintaining Australia Day on January 26.

She observed that a survey conducted by the IPA showed that while only 15 per cent supported changing the date it was worrying that the minority view continued to “occupy a majority of Australia’s institutions like the media, corporate Australia, universities and schools”. More alarmingly she explained that the “strongest anti-Australian sentiment” was found among young people who “through no fault of their own” had been subjected to years of indoctrination at school and university. In fact they had been taught to disparage their own country and embrace “a negative view of Australia both past and present”.

The conflation we see here is both unmistakable and tendentious. Opposition to January 26 is symptomatic of hostility to both Australia itself and its history. Support for the status quo is the ultimate test of patriotism. Any deviation is an illustration of the “fruits of bad ideology like identity politics and critical race theory”. The rush to judgment leaves out two pertinent considerations. There is clearly no consideration of another possible date for Australia Day. If you are opposed to January 26 you are beyond redemption. You are also irredeemably hostile to our British heritage and perhaps even to the “foundations of Western Civilisation”.

But hyper-conflation is not the most serious problem with the standard defence of an increasingly embattled January 26. There is little clear-eyed examination of the British invasion or of the homeland at the time. The safe arrival of the large fleet at Botany Bay within a couple of days was triumph of seamanship, navigation and logistics. But there is precious little else to admire and commemorate.

The abiding problem was that the expedition was rushed because of the unexpected loss of the 13 American colonies. The British government knew almost nothing about Australia. They had absolutely no idea about what was in the vast interior. The contrast with New Zealand is instructive. James Cook circumnavigated both islands in 1769 before he reached Australia. Britain did not annex New Zealand until 1840. There was a 70-year interval between “discovery” and taking possession. If the settlement of Australia had been delayed for that long the result may have been quite different.

The mistakes made in 1788 are legion. The overriding assumption  was that Australia was, in the words of the Privy Council, “a tract of territory practically unoccupied without settled inhabitants” an assessment which the colonists themselves realised was wrong soon after arrival. But it allowed the British to totally ignore the great weight of C18th international law and their own well-established practice in the North American colonies.

So it was that on February 7, 1788, Britain claimed both sovereignty over half the continent and the Crown became the beneficial owner of all the property. They were the most catastrophic decisions in Australian history which predetermined the frontier wars which continued for more than a hundred years.

Do our Anglophile conservatives wish us to remember all this with benign forgiveness assuming it was all an unfortunate misunderstanding? It won’t do of course. Terra-Nullius has blighted our history ever since 1788 and still shapes the foundation of our legal system. The theft of the First Nations’ collective property over the whole continent serially in 1788, 1824 and 1829 was one of the most audacious, outrageous property thefts in recorded history perhaps comparable with Lenin’s proclamation of 1917 which abolished private property everywhere in Russia. What a strange bedfellow for IPA members to embrace.

D’Abrera concludes her tribute to our British founders with the observation that they introduced the freedoms which define modern Australia. That would have sounded odd to the 1000 or so convicts who had been torn from their families, friends and homeland in most cases for minor property crimes and in effect exiled for life. It would have sounded even more strange to the victims of the slave trade in which Britain had been involved for generations.

These unpleasant facts remind us of the effortless hypocrisy of the defenders of empire. The rule of law was overwhelmingly about the defence of property and in practice the rights of the tiny land-owning oligarchy. John Locke observed that British law defends life, liberty and property. Property was clearly the most important. The Crown could take your life but not your property. This was emphatically the founding principle of Australian settlement. Thieves were hanged within the first few weeks at Sydney Cove.

So what we have is a similar situation to the contemporaneous foundation of the American Republic which proclaimed that all men were created equal while the great majority of the founding fathers either were, or had been, slave owners. Australia’s founding principal was the sanctity of private property. The human freight of thieves and pickpockets puts this assertion beyond reasonable doubt. And all the while the Crown had dispossessed perhaps half a million Aborigines living on their ancient, ancestral lands across half a continent. The explanation that the British officials didn’t know there were prior owners would not have provided a viable defence when the convicts stood before the magistrates.

The IPA is on the money when it observes that a very large majority of Australians want to have a day when they can celebrate the history and current life of the country. Most of them would be just as happy with another date. But Australian conservatives are still too often imperially minded. They want to celebrate those things that were brought from Britain rather than the ones which were created here by the colonists, bond and free, and their Australian born children. The poor old IPA was founded in 1943 and hasn’t moved all that far on from Sir Robert Menzies, Lord Warden of the Cinque Ports.