Country for bad dreams: vandalism on the Nullarbor Plain 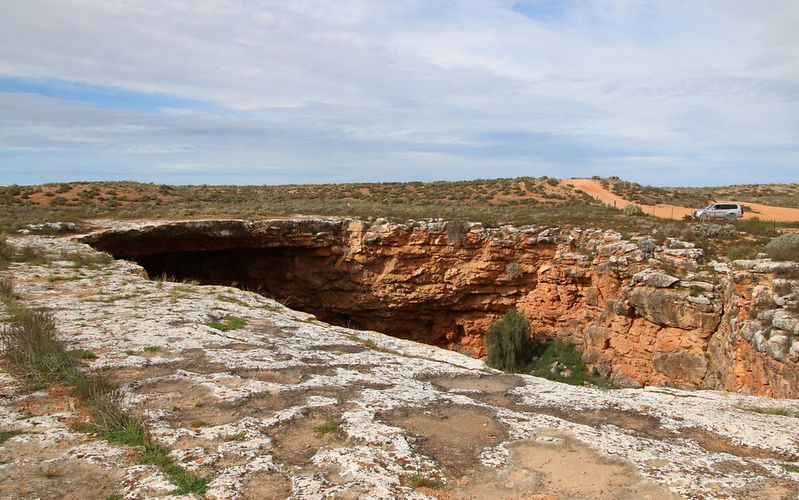 “This is quite shocking,” declared South Australia’s Attorney-General and Aboriginal Affairs Minister, Kyam Maher. “These caves are some of the earliest evidence of Aboriginal occupation of that part of the country.” That evidence was subtracted this month by acts of vandalism inflicted on artwork in Koonalda Cave on the Nullarbor Plain, claimed to be the world’s largest limestone karst landscape and covering over 200,000 square kilometres.

Edward John Eyre, the first European to cross the Plain in 1840-1841, wrote hauntingly of it as “a hideous anomaly, a blot on the face of Nature, the sort of place one gets into bad dreams”. In his case, personal circumstances soured the impressions: horses dying of dehydration; a case of mutiny resulting in the killing of his companion John Baxter; the theft of the party’s supplies; the slimmest chances of survival.

The work in question, carvings on chalk limestone, is said to be some 30,000 years old, considered sacred by the Mirning people. By the time news reached CNN of the incident, eight thousand years had been shaved off the estimate, one more in line with the 1956 dating by archaeologist Alexander Gallus. In information available on the Commonwealth Department of Climate Change, Energy, the Environment and Water, the “finger markings and unique archaeological deposits found in Koonalda Cave provide a rare glimpse of Aboriginal life on the Nullarbor Plain during the Pleistocene.”

The rock art in question is now plastered by crude graffiti, featuring such messages as “don’t look now, but this is a death cave”. The verdict of archaeologist Keryn Walshe, whose encyclopaedic knowledge of the Koonalda Cave is unsurpassed, was gravely unequivocal. “The art is not recoverable.” To remove the graffiti from the soft surface would effectively do away with the art itself. “It’s a massive, tragic loss to have it defaced to this degree.”

Something of a consensus has been reached on how this took place. A steel case, installed in the 1980s, was breached by digging intruders. Astonishingly, the Mirning elders seemed to have been the last ones to know about it. Bunna Lawrie, for instance, only heard about the matter this month. (Access is usually restricted to a few male elders; the site is closed to tourists.) “We are the traditional custodians of Koonalda,” he declared in a statement, “and ask for this to be respected and for our Mirning elders to be consulted.”

Put it down to inadequate resources, and a lack of will, which has also seen previous acts of vandalism take place. “The failure to build an effective gate, or to make use of modern security services, such as wildlife monitoring cameras that operate 24/7, has in many ways allowed this vandalism to occur,” suggested Clare Buswell of the Australian Speleological Federation Conservation Commission in a submission to the Aboriginal lands parliamentary standing committee made earlier this year.

The statement by Lawrie reiterates the point. “Since 2018 we have been asking for support to secure the entrance as a priority and to offer appropriate Mirning signage. This support did not happen.” Other misfortunes had befallen the site since, including the collapse of the cave entrance, and access works that did not involve consultation and were “not approved.”

The destruction of such sites should shock, but each revelation seemingly inures the authorities to them. The pattern is clear: apologies follow; horror is expressed; and even offers of compensation made to cope with irreversible harm. But the business of trashing a legacy continues, digestible as the stuff of accident or indifference.

In many instances, laws sympathetic to development and mining also do much to doom such works to extinction. The rock shelters of the Jukaan Gorge site in Western Australia were remorselessly levelled by Rio Tinto in May 2020, an outcome that was ethically atrocious yet legally sanctioned by the legislation of the day.

Of note was the mining giant’s conduct towards local elders. The company’s legal team stomped on any protest, haughtily informing members of the Puutu Kunti Kurrama and Pinikura (PKKP) that any emergency application to halt to the company’s works made to the federal government could only take place with the company’s blessing, and with 30 days-notice. Carol Meredith, the chief executive of the PKKP Aboriginal Corporation, recalled the sharp response from Rio’s lawyers, who stated that “we were not able to engage seeking out an emergency declaration that perhaps would have stopped proceedings, because of our claim-wide participation agreement.”

Within the wheels of the company, blissful ignorance reigned. Rio Tinto’s head of corporate relations, Simone Niven, was not only based in London but had little idea about the significance of the Juukan Gorge caves. Relations could hardly be counted as her strong suit.

Conforming to previous instances of such vandalism, penalties are being called for regarding the perpetrators of the graffiti. Under the legal regime, damaging such sites can carry a fine of $A10,000 or six months in prison. But the harm has been done; again, history has been left poorer, and the dreams worse than ever.