As governments try to contain the COVID-19 pandemic, they must have a view of the immediate future if they are to act rationally.

Among the factors shaping that view must be the consequences of the pandemic for populist nationalism, the need for governments to resist the allure of turning their backs on international cooperation and the pandemic’s debilitating effect on US–China relations. 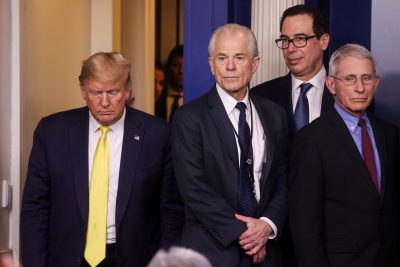 Australia’s challenge is to keep faith with the openness and internationalism that has delivered its prosperity and security over the past decades, but also to disallow short-term judgments to dictate long-term national interest, especially concerning its relationship with China. But what needs to be considered first is whether this event will so disturb the existing system that nations must go back to the drawing board to make sense of the future.

COVID-19 has delivered one of the most profound jolts in living memory to the social fabric and each individual’s very sense of security. It has intensified the perception of drift and distress in governance and administrative competence. Given the level of uncertainty, understanding what it means for international affairs is all the more challenging.

The response to the pandemic has revealed the hollowness of the populist conceit. Populists such as UK Prime Minister Boris Johnson, India’s Prime Minister Narendra Modi and US President Donald Trump were adept at fanning the flames of grievance in furnishing their rise to power. But at least in their initial responses to the pandemic they have been shown to have feet of clay when consistent, competent and reassuring leadership has been most in demand.

One problem is that in those countries where populists have ridden the wave of electoral angst to power, there has rarely been a credible, establishment alternative. If the crisis is contained, populists might brandish it as proof that when the crunch came, their style of leadership delivered. Protectionism would be in the ascendant, insularity seen as justifiable. Although it is too early to make any predictions about the US presidential elections in November, a re-elected — and thus emboldened — Trump would entrench in Washington an overtly protectionist administration with virtually no credible opposition or dissenting voices.

Clearly, if the crisis drags on, governments will have to do more to buttress the social safety net and rebuild fiscal credibility. This lends an opportunity for more centrist political leaders to reconfigure the nation state to meet this century’s new circumstances: the response to COVID-19 may help inspire more faith in the capacity of national governments to deliver basic needs.

Other challenges also await, however, namely how state intervention is wound back in the aftermath of the crisis. That proccess will bring another round of partisan, ideological fury. Governments must ensure that international coordination and cooperation triumph over the impulse to withdraw into a fortress mentality.

This is a tall order. Trump is not disposed to a constructive leadership role for the United States, while US–China friction and the United States’ troubled relations with Europe point to a rocky recovery path. The encumbrance of massive debt is also likely to limit the new US administration. The crisis has done little to alleviate the mutual suspicion between Washington and Beijing, layering it with childish barbs over the origins of the virus and its handling by the respective governments.

Trump’s top trade advisor and arch protectionist Peter Navarro bemoaned US reliance on overseas medical supplies, calling for the United States to ‘strengthen its public health industrial base, and defend [its] citizens, economy and national security’. Navarro’s message is clear: the virus presents another opportunity to ram home the dangers of foreign dependency.

Former Australian leaders have hastened to borrow Navarro’s scripture. Bill Shorten claimed that the virus ‘makes it painfully clear just how exposed [Australia is] when [it] acts as a colonial branch office of a global supply chain instead of an independent economic nation’. Former Australian prime minister Tony Abbott said that the ‘real “China Virus”’ was the ‘over-dependence on just one country’. This was Australia’s ‘deepest complacency, trading off long-term national security for short-term economic gain’. Those pushing the China ‘threat’ narrative are already conflating the coming of the virus with their narrative that Beijing poses an existential challenge to Australian security and prosperity.

Nevertheless the pandemic might stimulate new thinking about how the nation state charts a unifying roadmap for the future and rekindle faith in democratic government. Government decision making needs to better integrate spheres of economic prosperity, health, national security and social harmony. The risk is that the unprecedented, volatile and seismic dynamics of COVID-19 pulls these dimensions of national and international governance apart.

Stitching them firmly together anew requires an intellectual and administrative leap. If ever there was a moment for governments to seize the initiative, to craft a new narrative for national progress and establish a revitalised platform that will help drive the country to future success — it is now.

Time will tell whether this pandemic provides a historic moment of reset in both domestic and international institutions. This crisis highlights that the nation state has been struggling to adapt to the challenges emerging from globalisation. Still it remains the key organising framework for the practice of government in an interconnected world. Any progress towards a new narrative coming out of this crisis must take account of that reality, at the same time prioritising the preservation of Australia’s openness to its region and the world.

James Curran is Professor of History and non-resident senior fellow at the United States Studies Centre, The University of Sydney.

A longer version of this article originally appeared here on The Australian Financial Review.