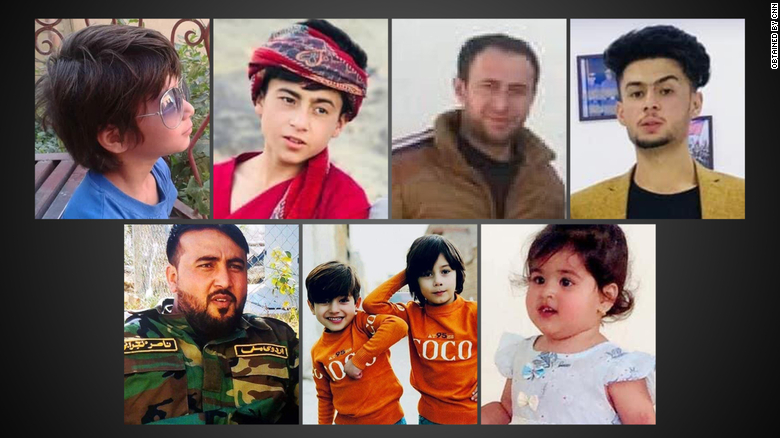 Several children are reported to have been killed in a US drone strike in Kabul. (Image: CNN)

ISIS-K uses human suicide bombers to personally assassinate targets and murder civilians. The Americans use mechanical drones piloted from Langley, Virginia to do the same.

Both result in civilian casualties. Using suicide bombers and drones to kill off your enemies and thwart their purposes have a lot in common. Both have been used recently by Americans and ISIS-K  in Afghanistan.

The central thing that they have in common is their capacity to inflict damage on non-combatants. They are vicious when it comes to their impact on the innocent.

There were more fatalities and injuries and destroyed buildings and infrastructure from “conventional” bombs dropped on and around Tokyo in 1944/45 than from the atomic bombs dropped on Hiroshima and Nagasaki in August 1945.

Today there are more people – soldiers and civilians – killed in the course of ordinary and recognized conflicts than are wiped out in the clandestine activities of agents or armies working under the cloak of secrecy or away from the conventional battlefield to give them the advantage of surprise.

But that fact doesn’t mean that innocent non-combatants are safe right now or that the moral status of fatalities, injuries and damage from bombings that impact civilian populations is getting more attention. There is a new lease of life (or death?) because of the behaviour of two parties in Afghanistan – the US and the ISIS-K – see that it is to their advantage to operate in a concealed way.

ISIS-K uses human suicide bombers to assassinate targets and murder civilians. The Americans use mechanical drones to do the same. Both result in civilian casualties.

The UK-based Bureau of Investigative Journalism estimated the total number of deaths since 2004 from drones and other covert killing operations in Pakistan, Afghanistan, Yemen and Somalia to be between 8858 and 16,901. Of those, up to 2200 are believed to have been civilians, including hundreds of children, although that is likely an undercount because the US classifies people killed in drone strikes as “enemies killed in action” unless proven otherwise.

We learnt a lot about civilian casualties in wars when the destructiveness of weapons available to combatants far exceeded their expertise in using conventional weapons. Weapons of mass destruction like atomic bombs or nerve gases were allowed to seep unseen into battle scenes and warfare lifted to a new and unprecedented level.

Good results can come from appallingly bad processes and always have. Only the morally bankrupt would see getting some advantage this way as a justification for the evil means by which the benefit is obtained.

Conventional soldiers know about warfare inflicting damage and causing casualties in the ordinary conduct of a battle. With these technical developments, war becomes a spooky exercise conducted by technical experts inflicting loss and pain.

Wars and the work of defence departments often have unexpected consequences. The internet is a development that was created by the US Defense Department’s need towards the end of the Vietnam War to find a way to send and receive documents that remained digital and inaccessible without coded access.

In moral terms, is there any difference between human agency killing civilians which is thereby demonstrably something directly and inevitably the consequence of this sort of human agency on the one hand and something done by programmed machines that have no immediate human agency guiding their steps but are actually driven by technology directly – as happens with drones?

The short but correct answer is a resounding NO. There is no difference and both are acts of homicide. But the use of technology can offer the comforting but misleading reassurance that without the direct hand of human agency in its execution, it is somehow less culpably immoral.

In fact, the lack of human agency actually pushes this activity to a new level of irresponsibility. And the basic moral calculations that led to this conclusion were known in WW II.

What are the moral questions and calculations? Prescinding entirely from the morality of the combative engagement of the various parties or the war they are fighting, the ethical questions really come down to the assessment of means, not ends.

The ends to be pursued for countries at war are singular: victory. Whether they are just in being at war is a completely separate issue.

But leaving that consideration to one side, the question we need to ask at this stage of the conflict is simple, and it applies immediately in Afghanistan: how can combatants conduct hostilities in a responsible and ethically defensible way?

We learnt in World War One that gassing your opponents was not only lastingly destructive but actually ethically indefensible. We didn’t have that to contend with in World War Two.

But we had then, and do now have, other nefarious means at our disposal that are no less lastingly destructive – land mines that permanently maim and today, digitally guided bombs that can be exactly targeted.

What is the moral calculus we bring to assessing what we do with this capacity and its potential for destruction?

The assessments remain the same as those used in all warfare: everything should be done to ensure that the weapons are kept away from doing lethal harm to non-combatants, the innocent, women and children and all who don’t make war but have to live with its sometimes too local conduct.

That, of course, is always more an art than a science.