If the history of the 21st to 25th centuries is ever written, it will record that while dangerous a climate tipping point was crossed, the powers that be in Australia opened some of the world’s largest coal basins and undertook an Orwellian-titled “gas led recovery”.

Mass extinction events in the Earth history occurred when environmental changes took place at a rate to which species could not adapt. Plants and animals are currently dying off at a rate that is 100 to 1000 times faster than the mean rate of extinction over geological timescales. Since the onset of the industrial age, in particular since about 1970, global warming accelerated at by one to two orders of magnitude faster than during the last glacial termination (~16000 – 8000 years ago) and much earlier.

“Burning all fossil fuels would create a different planet than the one that humanity knows. The paleoclimate record and ongoing climate change make it clear that the climate system would be pushed beyond tipping points, setting in motion irreversible changes, including ice sheet disintegration with a continually adjusting shoreline, extermination of a substantial fraction of species on the planet, and increasingly devastating regional climate extremes […] this equates to 400,000 Hiroshima atomic bombs per day 365 days per year”

The Intergovernmental Panel for Climate Change (IPCC AR5) projects linear warming to 2300 and 2500, which however does not take full account of amplifying feedbacks from a range of sources (Trajectories of the Earth system in the Anthropocene). These include reduced CO2 sequestration in the warming oceans, albedo changes due to melting of ice, enrichment of the atmosphere in water vapor, desiccation and burning vegetation, release of methane from permafrost.

According to the National Oceanic and Atmospheric Agency (NOAA) global warming has accelerated significantly during 2015-2020.

The rise in temperatures is driving a rise in extreme weather events with a three-fold to six-fold frequency since 1980 (Figure 1), including severe storms, tropical storms, flooding, droughts and wild fires (NOAA 2018). 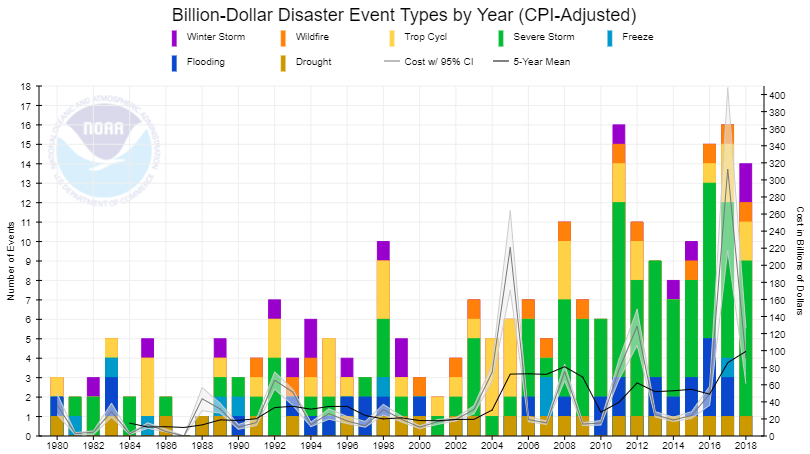 Figure 1. The growth in the frequency of extreme weather events in the US during 1980-2018

Warming of the Arctic, including Alaska and western Canada, by approximately 3 to 4 degrees Celsius, reduces the temperature difference with Europe and North America, weakening the subpolar jet stream vortex, which allows penetration of cold air fronts southward and warm air masses northward. The consequence includes snow storms in parts of the northern hemisphere and extensive fires in the Arctic (Siberia, Alaska and Canada).

A growing frequency of extreme weather events, cyclones and floods (Figure 1) is increasingly damaging the habitat of coastal regions such as Florida and Texas and island chains such as the Caribbean and the Philippine. Heating mountainous terrains, such as California. In Australia large regions would continue to suffer from extensive bush fires.

Climate change is expressed by expansion of the tropics and a shift of terrestrial climate zones toward the poles, taking place at a rate of approximately 50 to 100 km per decade which, along with sea level rise is changing the geography of the planet. Once sea level reaches equilibrium temperatures it will attain at least 25 meters above the present, by analogy to Pliocene level (before 2.6 million years ago).

Large-scale melting of the Greenland and Antarctica ice sheets, discharging cold ice melt water, is already cooling of parts of the oceans. The clash between cold air masses and tropical fronts would increase storminess, in particular along coastal boundaries and islands. Such storminess, along with intensified tropical cyclones, would render island chains increasingly vulnerable.

As inexplicable as it looks humans are in the process of altering the climate of their home planet. Unlike their response to COVID-19 medical science, the powers-that-be only pay lip service to the warnings, promoting a newspeak ideology of “gas-led recovery”, a term conflating the deadly virus with the inundation of the atmosphere with toxic methane. Climate scientists, confronting powerful political and psychological barriers, are overwhelmed by these developments.

To date most suggestions for mitigation and adaptation are woefully inadequate to arrest global warming. Reductions in carbon emissions, which are absolutely essential, may no longer be adequate to arrest accelerating greenhouse gas and temperature levels. At the current level of carbon dioxide (>500 parts per million equivalent CO2+methane+nitrous oxide), reinforced by amplifying feedbacks from land and oceans, the remaining option would be to sequester (down-draw) greenhouse gases from the atmosphere—a global imperative.

The world is walking blind into uncharted territory. Media considerations of current national and international affairs, civil unrest, economic upheavals, wars and preparations for wars, fail to realize that, unless drastic measures are undertaken, time is running out for civilization.