In a country where there has always been more space than people, where the land and wildlife are cherished like a Picasso, nature is closing in. Fueled by climate change and the world’s refusal to address it, the fires that have burned across Australia are not just destroying lives, or turning forests as large as nations into ashen moonscapes. 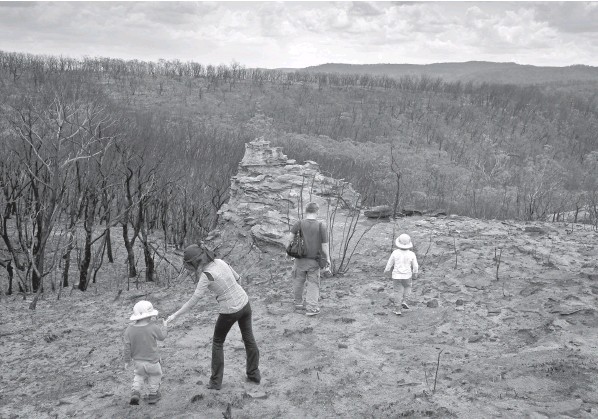 PHOTOGRAPHS BY MATTHEW ABBOTT FOR THE NEW YORK TIMES Devastation from a bush fire in Bell, New South Wales.

The fires or their smoke directly affected 57 percent of Australians, a recent Australia Institute survey found.They are also forcing Australians to imagine an entirely new way of life. When summer is feared. When air filters hum in homes that are bunkers, with children kept indoors. When bird song and the rustle of marsupials in the bush give way to an eerie, smoky silence.

“I am standing here a traveler from a new reality, a burning Australia,” Lynette Wallworth, an Australian filmmaker, told a crowd of international executives and politicians in Davos, Switzerland, last month. “What was feared and what was warned is no longer in our future, a topic for debate — it is here.”

“We have seen,” she added, “the unfolding wings of climate change.”

Like the fires, it’s a metaphor that lingers. What many of us have witnessed this fire season does feel alive, like a monstrous gathering force threatening to devour what we hold most dear on a continent that will grow only hotter, drier and more flammable as global temperatures rise.

It’s also a hint of what may be coming to a town, city or country near you.

And in a land usually associated with relaxed optimism, anxiety and trauma have taken hold. A recent Australia Institute survey found that 57 percent of Australians have been directly affected by the bush fires or their smoke. With officials in New South Wales announcing Thursday that heavy rain had helped them finally extinguish or control all the state’s fires that have raged this Australian summer, the country seems to be reflecting and wondering what comes next.

Politics have been a focal point — one of frustration for most Australians. The conservative government is still playing down the role of climate change, despite polls showing sharp public anger. And yet what’s emerging alongside public protest may prove more potent.

In interviews all over the fire zone since September, it’s been clear that Australians are reconsidering far more than energy and emissions. They are stumbling toward new ways of living: Housing, holiday travel, work, leisure, food and water are all being reconsidered.

“If there’s not a major shift that comes out of this, we’re doomed,” said Robyn Eckersley, a political scientist at the University of Melbourne who has written extensively about environmental policy around the world. “It does change everything — or it should.”

Professor Eckersley is one of many for whom climate change has shifted from the distant and theoretical to the personal and emotional.

Before the fires peaked last month, she and I had often spoken in dry terms about Australia and climate change policy. This last time, as she sat in a vaca tion home southwest of Melbourne, where smoky haze closed a nearby beach, she told me about a friend driving south from Brisbane, “by all these towns and farms he couldn’t imagine bouncing back.”

Australia, she argued, must accept that the most inhabited parts of the country can no longer be trusted to stay temperate — and, she added, “that means massive changes in what we do and the rhythm of our work and play.”

More specifically, she said, the economy needs to change, not just moving away from fossil fuels, a major export, but also from thirsty crops like rice and cotton.

Building regulations will probably stiffen too, she said. Already, there are signs of growing interest in designs that offer protections from bush fires, and regulators are looking at whether commercial properties need to be made more fireproof as well.

The biggest shifts, however, may not be structural so much as cultural.

Climate change threatens heavy pillars of Australian identity: a life lived outdoors, an international role where the country “punches above its weight,” and an emphasis on egalitarianism that, according to some historians, is rooted in Australia’s settlement by convicts.

Since the fires started, tens of millions of acres have been incinerated in areas that are deeply connected to the national psyche.

It’s “a place of childhood vacations and dreams,” as one of Australia’s great novelists, Thomas Keneally, recently wrote.

For months on end, driving through these areas, where tourism, agriculture, retirement and bohemian living all meet for flat white espressos at the local cafe, has meant checking reports for closed roads and wondering if the thick clouds of smoke in the distance mean immediate danger.

There’s an absurdity even to the signs. The ones that aren’t melted warn of wet roads. Just beyond them are trees black as coal and koalas and kangaroos robbed of life.

The fear of ferocious nature can be tough to shake. Fires are still burning south and west of New South Wales, and to many, the recent rain near Sydney felt as biblical as the infernos the storms put out — some areas got more than two feet, flooding rivers and parched earth hardened by years of drought.

Last month in Cobargo, a dairy and horse town six hours’ drive from Sydney, I stood silently waiting for the start of an outdoor funeral for a father and son who had died in the fires a few weeks earlier. When the wind kicked up, everyone near me snapped their heads toward where a fire burned less than a mile away.

“It just hasn’t stopped,” said an older man in a cowboy hat.

No other sentiment has better captured Australia’s mood.

That same day, in the coastal town of Eden, government officials welcomed a cruise ship, declaring the area safe for tourists. A week later, another burst of fire turned the sky over Eden blood red, forcing residents nearby to evacuate.

It’s no wonder that all across the area, known as the South Coast, the streets in summer have looked closer to the quiet found in winter. Perhaps, some now say, that’s how it should be.

“We should no longer schedule our summer holidays over the Christmas season,” Professor Eckersley said. “Maybe they should be in March or April.”

“Certainly, we should rethink when and whether we go to all the places in the summer where we might be trapped,” she added.

David Bowman, a climate scientist in Tasmania who wrote an article calling for the end of the summer school holiday, which went viral, said Australia’s experience could help the world understand just how much climate change can reorder the way we live.

“You can’t pretend that this is sustainable,” he said. “If that’s true, you’re going to have to do something different.”

Smoke may be more of a catalyst than flame. For much of the summer, a fog of soot has smothered Sydney, Melbourne and Canberra. In Sydney alone, there were 81 days of hazardous, very poor or poor air quality last year, more than the previous 10 years combined. And until the recent rains, the smell of smoke often returned.

“It’s bringing home the viscerality of what science and scientists have been telling us is going to happen,” he said.

There’s unity in that, as so many have seen climate change up close and personal. But there’s also inequality. The air filters selling out at hardware stores last month cost close to $1,000 each. In December, I heard surfers in the waves at Bondi Beach deciding to get out early to avoid breathing in too much smoke and ash — but farther west, where workingclass immigrants cluster, I met a bicycle delivery driver who said he could work only a couple of hours before feeling sick.

Mr. Cannon-Brookes said Australia could seize the moment and become a leader in climate innovation. Ms. Wallworth, the filmmaker, echoed that sentiment: What if the country’s leaders did not run from the problem of climate change, but instead harnessed the country’s desire to act?

“If only our leaders would call on us and say, ‘Look, this is a turning point moment for us; the natural world in Australia, that’s our cathedral, and it’s burning — our land and the animals we love are being killed,’” she said.

“If they called on us to make radical change, the nation would do it.”

In “The Lucky Country,” the 1964 book of essays by Donald Horne that is often described as a wake-up call to an unimaginative nation, Australians are deemed tolerant of mediocrity, but “adaptable when a way is shown.”

One afternoon, I traveled to the Sutherland Shire, near where Prime Minister Scott Morrison lives, with Horne’s comments on my mind.

Near a bus stop, I met Bob Gallagher, 71, a retired state employee with thick white hair. He felt strongly that the criticism of Mr. Morrison for not doing enough about climate change was unfair.

“The first thing the government needs to do is run the economy,” Mr. Gallagher said. “I just don’t understand what these climate change people want.”

I asked him to imagine a version of Ms. Wallworth’s dream — an Australia with a prime minister who shouted to the world: “What we all love, this unique country, is being destroyed by inaction. We’ll punch above our weight, but we can’t do it alone. We need your help.”

Mr. Gallagher listened without interrupting. “I hadn’t thought of that,” he said. “I could support that.”

Damien Cave is the bureau chief of NYT in Sydney