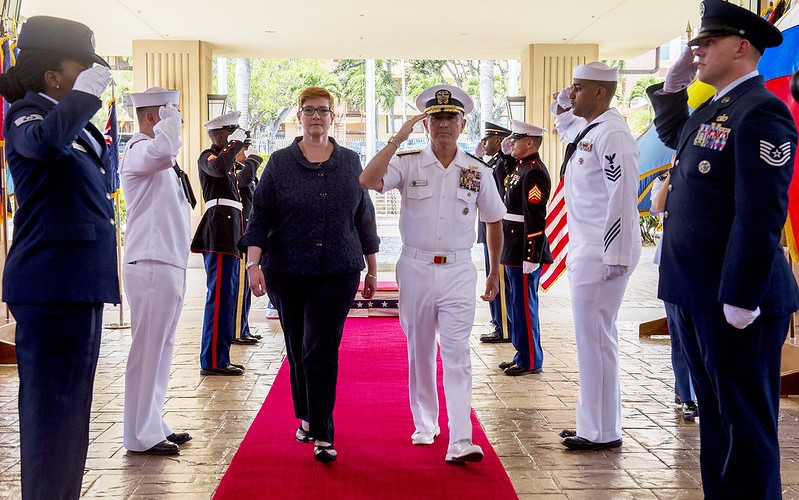 While never spelled out by our government, the nuclear deterrence pact means that Australia would ask the US to commit genocide in its defence.

Australia has three direct connections to the prospect of nuclear war. The first involves nuclear weapons in the direct defence of Australia. The second, through Australian defence and intelligence facilities providing direct support for US global nuclear operations in war. The third, through the high likelihood that one or more of those joint defence facilities will become targets of nuclear missile attack in time of major war.

There are basic unanswered questions concerning the limited credibility of claimed nuclear threats to Australia or their probability, or about the unquestioned need to counter such threats with a nuclear (albeit borrowed) response. But most important of all, no Australian government has ever publicly acknowledged that this policy of extended nuclear deterrence rests on the prospect that Australia would expect the US to attack major cities in China or Indonesia or elsewhere with large numbers of nuclear weapons. In such cases, there is no way that nuclear weapons could be used effectively in line with US nuclear doctrine without reaching genocidal scale.

Even if the stated objects of attack were not cities and their populations as such (in US doctrine terms ”counter value targets”), immediate mass death on a scale not seen since the world wars would be inevitable since the alternative US doctrine of counterforce targeting (attacking militarily significant facilities) frequently includes targets in urban areas. Extended nuclear deterrence means that the plan is that Australia would ask the US to commit genocide in its defence.

Next to this unspoken horror, the other often noted problems of Australian extended nuclear deterrence policy (END) — that there is no such US assurance to Australia, and that the policy is a potent encouragement to any neighbouring country to imitate Australia’s apparent belief in the military utility of nuclear weapons — may seem less consequential. Except that, once again, no Australian government has ever publicly and transparently tried to explain how this policy advances the national interest or sits with Australians’ sense of themselves. Possibly for the very good reason that attempts at explanation of either would not be possible without either ridicule or shame.

In fact, what might be called the Australian model of extended nuclear deterrence, as distinct from that of the NATO countries of Europe, or the US East Asian allies, South Korea and Japan, has some distinctive characteristics.

In summary, the Australian model of extended nuclear deterrence has a number of distinctive qualities. There is an offshore location of potential deterrent force, rather than US nuclear weapons in Australia. There is a lack of an identifiable or identified direct nuclear threat. The Australian hosting of US nuclear targeting-related intelligence facilities is justified as Australian contribution to maintenance of global nuclear stability. And there is a concomitant Australian government secret acceptance of high probability enemy nuclear targeting of at least some of those facilities in the event of major war.

We live with a lack of certainty about the standing of the END assurance and its character in American eyes. An explicit Australian warning to US that reliance on END avoids the need for Australia to develop its own nuclear weapons. And there is a profound and persisting lack of Australian public awareness of these issues.

More sharply, but accurately Australian government policy of reliance on US extended nuclear deterrence against nuclear threats is absurd, obscene and strategically reckless:

This is part two of an edited extract from Richard Tanter’s submission to the Independent and Peaceful Australia Network People’s Inquiry in US-Australia Alliance, September 2021. Read part one here. Next: Pine Gap and nuclear war.