Dangerous liaisons: Pine Gap (and the Alice) as nuclear target, then and now. Part 4 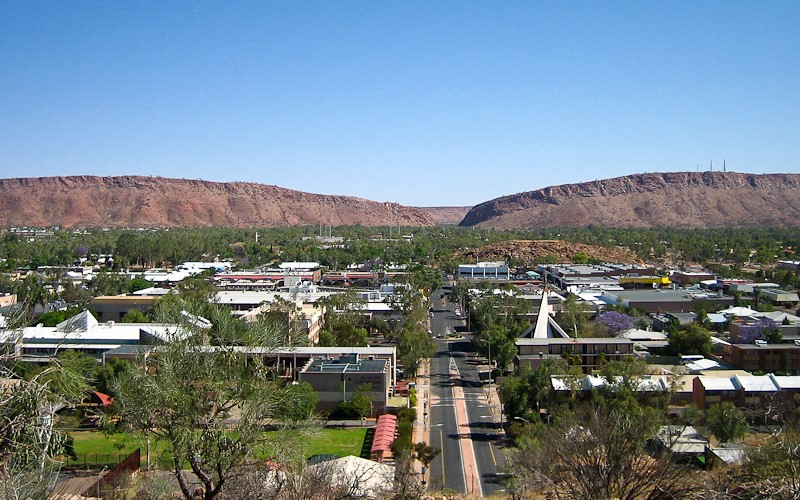 Too close for comfort: Alice Springs is in deadly danger if Pine Gaps comes under nuclear attack. (Image: Flikr/Ulmann Patrik)

Amazingly, it is only four decades since it was believed that a nuclear strike on Pine Gap would do little damage to Alice Springs. No longer.

One of the enduring public concerns of the hosting of United States intelligence and military facilities in Australia has been the possibility of a nuclear missile attack on one or more of these facilities in the event of major conflict between the United States and another nuclear power. These fears derive from an understanding that at different times over the past half century one or more of these facilities are of such importance to the US ability to conduct nuclear operations that their elimination with a long-range nuclear missile strike would be a high priority for an enemy.

During the Cold War, at least three bases were considered by both independent analysts, including Desmond Ball and the Medical Association for the Prevention of War, and by the Australian government as highly likely Soviet missile targets if a US-Soviet nuclear war progressed beyond a limited use of tactical (i.e., short-range, low-yield) nuclear weapons: the North West Cape Naval Communications base, the Nurrungar ground station for US early warning satellites, and the Pine Gap signals intelligence base.

Nurrungar was closed in 2000 and replaced by the installation at Pine Gap of an automatically and remotely operated Relay Ground Station for the early warning geostationary satellites.

There would be a strong argument for calling for a precautionary approach, to the HEH Naval Communications Station, and presuming that it retains some NC3 roles, and could remain a reasonably high-priority target, most likely with nuclear weapons, in time of major conflict. Moreover, two important new joint US-Australian facilities at North West Cape, the Space Surveillance Radar and the Space Surveillance Telescope play an important role in US planning for space war-fighting operations. However, at this point it is not clear that negating these activities would be a high priority for a nuclear-armed adversary.

Pine Gap, on the other hand, remains a likely priority target for a Chinese missile strike in the event of a major China-US conflict, both because of its role as a remote ground station for early warning satellites in the Defence Support Program (DSP) and Space Based Infra-Red Satellite (SBIRS) systems, and its larger role as a command, control, downlink, and processing facility for US signals intelligence satellites in geostationary orbit.

In the case of US-Russia major war, the probability of a Russian nuclear strike is much higher, given the Russian abundance of suitable missiles, and China’s relative paucity, considered against its likely list of priority targets.

In his 2012 book on Australia’s economic and political relationship to China The Kingdom and the Quarry, the journalist David Uren reported that in a classified Force Posture Review prepared prior to the 2009 Defence white paper ”defence thinking is that in the event of a conflict with the United States, China would attempt to destroy Pine Gap”.

The Australian government has long known that Pine Gap, and earlier, Nurrungar and North West Cape, were highly likely targets of a nuclear attack in the event of a nuclear war involving the US. In 1980 the Office of National Assessments and the Joint Intelligence Organisation study for the Fraser Cabinet discussed the possibilities of a northern hemisphere nuclear war. The ONA-JIO report  was sanguine about the wider consequences for Australia, but did concede that should the worst, albeit unlikely, case occur, all three US bases would be targets under particular circumstances:

”We cannot, however, discount the possibility, given Soviet war-fighting doctrine — which places a high value on pre-emption — that the US facilities in Australia might be targeted relatively early in a strategic nuclear war. As the nuclear conflict escalated and the prospects of its containment receded, we judge that nuclear attacks on all of these facilities would probably occur.

”Where each side was using, or was judged likely to use, its submarine forces to strike at the opposition’s cities, the USSR would rank North West Cape as an important nuclear target. Since Pine Gap and Nurrungar are not an integral part of an offensive strategic nuclear weapons system, the likelihood of an attack on these installations may be somewhat lower, but such attacks cannot be excluded.’’

This study was kept under Top Secret seal until it was declassified in 2012.

In fact, not all senior defence planners shared the relative optimism of the 1980 report. After leaving office, the long-serving defence minister in the Hawke government, Kim Beazley, and the influential former deputy secretary of Defence, Paul Dibb, made clear that their own understandings while in office that all three bases were accepted as being targets. They also knew the consequences of an attack on these Australian bases would be vastly different from those envisaged by the 1980 report, which Dibb described in 2013 as “overly optimistic“.

Beazley, as opposition leader in 1997, told a parliamentary committee seminar that: ‘’We accepted that the joint facilities were probably targets, but we accepted the risk of that for what we saw as the benefits of global stability.’’

Paul Dibb wrote in The Australian on September 10, 2005, that: ”We judged, for example, that the SS-11 ICBM site at Svobodny in Siberia was capable of inflicting 1 million instant deaths and 750,000 radiation deaths on Sydney. And you would not have wanted to live in Alice Springs, Woomera or Exmouth — or even Adelaide.”

In 1983 Desmond Ball published an assessment of the possibilities of nuclear attack on the three main likely targets of Soviet nuclear attack in Australia, the immediate physical consequences, and the possibilities of effective civil defence measures. In this Ball worked closely with R.H. Mathams, then chief defence scientist who had a leading role in the ONA-JIO study, Ball and Mathams both based their estimates of nuclear detonation effects on the classic 1977 US government study edited by Samuel Glasstone and Philip J. Dolan, The Effects of Nuclear Weapons, Third edition.

Ball’s 1983 discussion of the blast and heat effects of a one-megaton airburst detonation over Pine Gap concluded that, fallout issues apart (dependent on prevailing winds), while clearly Pine Gap and its workers would be annihilated, there would be few if any fatalities in the town of Alice Springs, 20 kilometres from the base.

In 1983 the population of Alice Springs was just 16,000, and Ball judged the nearest built-up parts of the town were about 18 kilometres from the notional point of detonation. In the event of a one-megaton airburst over Pine Gap, no significant built-up part of the town would come within a blast zone of lethal overpressures of 2–5 pounds per square inch (14–36 kPa). Because of distance and topography Ball was optimistic about the minimal effects on the township itself: ”The blast effect at Alice Springs would be less than one psi. Some windows would break, and there would be occasional frame failures, but most houses would be undamaged. The casualties from blast effects should be nil.”

In 1985, the physician Peter Tait and colleagues in the Northern Territory branch of the Medical Association for the Prevention of War (MAPW) used Ball’s 1983 analysis as the basis for answering the question often put to them by people in Alice Springs: What will happen to Alice if the Bomb goes off?

While the MAPW study did not disagree with Ball’s conclusion that there would be few fatalities from blast effects in the town proper, it noted that the initial heat, electromagnetic pulse, and flash effects would be very considerable, and that, even if fallout radiation effects were not included, local radiation load would have significant short- and long-term effects. The MAPW analysis was more fine-grained than Ball’s and added important local context that made clear that there would be immediate fatalities in outlying parts of the town, including the airport, and that the town and its people as a whole would face very severe difficulties.

By 2020 the population of the Alice Springs local government area, which reaches to the eastern boundary of the Pine Gap Prohibited Area, had increased by 10,000 since the early 1980s to 26,448. The physical expansion of Alice Springs, and particularly its expansion west and south, increase the proportion of the town’s population exposed in the event of an attack on Pine Gap. The Larapinta area to the west of the town centre has seen considerable growth in the direction of areas vulnerable to heat, blast and radiation effects of an attack on Pine Gap. Of the 26,448 in the town as a whole, more than 2300 lived in the Heavitree statistical area, south of Heavitree Gap.

These figures do not include passengers and the hundreds of workers at the airport less than 10 kilometres from the epicentre of the explosion, with more than 640,000 regular passengers (i.e. not including military) on 7000 flights a year. Nor does it include the inmates and staff at the Alice Springs Correctional Centre on the Stuart Highway, nine kilometres from the base, which was built for 400 inmates, but housing at least 619 in 2018, plus staff of several hundred.  The satellite suburb of Kilgariff is built between Heavitree Gap and the airport, lies about 15 kilometres east of the base. All of these growth areas of Alice Springs and its surrounds are highly vulnerable to direct blast, heat, and radiation effects in the event of an attack on the base, and as a result of secondary effects.

Even without any reconsideration of the effects of an airburst detonation based on more recent studies, detailed analysis of the effects of topography on blast, thermal and radiation local effects, or consideration of the type or number of weapons that might be deployed against Pine Gap in plausible military scenarios, it is clear that Ball’s 1983 judgement that there would be no blast fatalities in the town is no longer plausible.

Moreover, there has been considerable reassessment of both radiological and thermal effects of nuclear detonations since Glasstone and Dolan’s compilation of US evidence. As Lynn Eden documented in her classic study Whole World on Fire (2004), complex thermal effects were systematically discounted in US government studies for many years. Firestorm effects were known, but considered too complex to estimate reliably. Eden documents nuclear establishment research that demonstrated that not only could such algorithms be developed, but that the firestorm consequences of nuclear detonations were at least comparable to the blast effects.

In Central Australia, where bushfires are normal, frequent and under particular conditions burn out larger areas than in the southern areas of Australia, modelling the fire effects of militarily realistic nuclear attacks on Pine Gap is necessary and urgent for informed public consideration of the risks of hosting the joint facility.

This is part four of an edited extract from Richard Tanter’s submission to the Independent and Peaceful Australia Network People’s Inquiry in US-Australia Alliance, September 2021. Reads parts one, two and three.