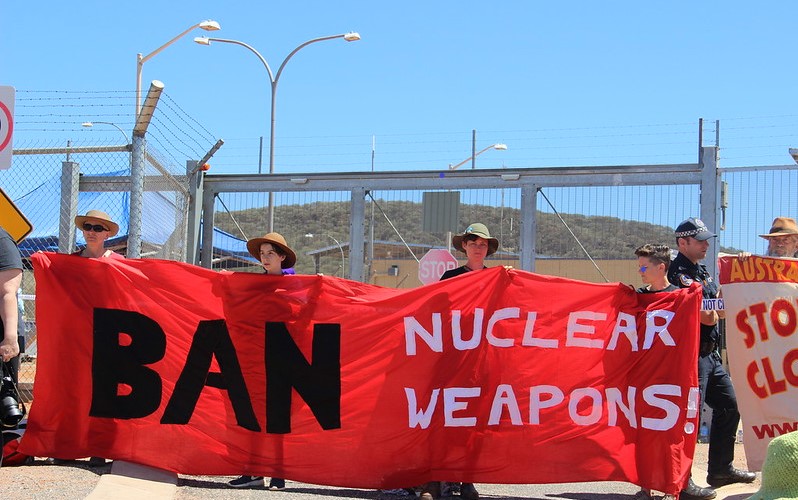 Protests outside Pine Gap: the base has long been a contentious part of the US-Australia alliance. (Image: Flikr/Tim Wright)

The most egregious example of our assistance to US missions could be terminated without threatening genuine US strategic interests, or the alliance.

All states possessing nuclear weapons must have the means to exercise command over their use, to control the behaviour of the weapons platforms themselves, and to reliably communicate on both matters. Nuclear command, control and communications (NC3) systems are critical enabling components of nuclear attack planning and operations. In the most powerful Nuclear Possessing States, and especially, the United States, these systems are typically global in character, both in terms of distribution around the world (and in space), and in the sense of network space. These nationally hosted elements of US globally distributed nuclear command, control and communication systems are complex, highly opaque, subject to legal restrictions on information and difficult to research.

The US NC3 specialist Paul Bracken recently summarised the global geographic sense of the current US NC3 situation as follows:

”Nine countries now possess nuclear weapons. Five more countries (Germany, the Netherlands, Belgium, Italy, Turkey) have US nuclear weapons positioned on their territory. Other nations are so critically involved with US nuclear operations through warning, intelligence, and missile defence that for all practical purposes they are part of the US NC3 system (Japan, the ROK, Australia, Taiwan). This gives at least 18 countries in total involved in nuclear or closely related NC3. Globally, no less than 36 states are directly or indirectly involved in the projection of nuclear threat against other states (namely, the US and its NATO and Pacific allies, plus the other eight nuclear armed states, all dependent in one way or another on nuclear command and control systems).”

As Bracken notes, four of these US allies lie within the Asia-Pacific region, all of which have defence policies openly reliant on US extended nuclear deterrence, and all, more to the point, as Bracken puts it, ”part of the US NC3 system”.

In Australia, the Joint Defence Facility Pine Gap near Alice Springs plays a critical role in US NC3 operations, and a direct role in US planning for nuclear operations. In broad terms, Pine Gap is one of the largest US intelligence facilities outside the United States, with three main functions.

First, Pine Gap serves as a command, control, and data downlink ground station to US signals intelligence satellites in geosynchronous orbits above the equator, collecting, monitoring, and downlinking for processing and analysis a wide range of types of electronic emissions within its satellites’ ”footprints” covering most of the earth’s surface from the mid-Pacific to eastern Africa.

Second, it carries out the reverse mode of signals collection, with ground antennas at Pine Gap intercepting, monitoring and analysing downlinks from a range of types of foreign satellites in geosynchronous orbit, principally communications satellites owned by both allies and adversaries.

Third, it hosts a somewhat separate Relay Ground Station which relays command and control instructions and downlinks data from another set of US satellites in geosynchronous orbit carrying large infrared telescopes that detect the heat bloom of the launch of ballistic missiles, in order to both provide early warning of missile attack and to assist in US, Japanese and South Korean missile defence targeting.

The same infrared satellites that provide the US with early warning of missile attack, and which are critical to US and Japanese missile defence, also in time of war provide US strategic nuclear planners with intelligence as to which adversary missiles silos have launched their missiles and are consequently empty, and those which have not, and are consequently candidate US targets. The data downlinked from the OPIR satellites is passed automatically through the Relay Ground Station at Pine Gap to the OPIR Mission Control Station in Colorado in near real time to feed targeting plans of a US second nuclear strike.

Pine Gap and the nuclear ban treaty: why it is not ‘impossible, impractical’

The Australian government refuses to sign the 2017 Treaty on the Prohibition of Nuclear Weapons (TPNW), preferring to rely on US nuclear weapons to maintain global peace. Since the TPNW prohibits the encouragement or inducement to use nuclear weapons, as well as their possession or use or threat of use, signing the TPNW would require Australia to abandon its policy of reliance on US extended nuclear weapons — as New Zealand did in 1986.

But more importantly here, the treaty also prohibits ”assistance’’ to another country to use nuclear weapons — which the NC3 role of Pine Gap would clearly violate.

The Australian government’s response has been simple: ”If that is the case, then Australia can never be join the nuclear ban treaty, because the US alliance makes it impossible.”

In 2018 testimony to a parliamentary committee about the TPNW, senior Australian officials located these NC3 involvements, principally at Pine Gap,  in the context of the Australian alliance with the US, within which they asserted there are ”many separate interlocking structures, understandings, agreements and joint activities and facilities … [that are] incompatible with the treaty.’’

As a result, the DFAT officials averred, it would be ”impossible, not practical, for Australia to restrict roles under the alliance to non-nuclear missions.”

Essentially, the Australian government argued, over more than half a century of alliance integration Australia has become so hard-wired into US nuclear planning and operations – technologically, organisationally and institutionally – that there is no prospect of remedying the situation, short of the politically unpalatable requirement of fully closing the offending facilities, and with that, threaten to end the US alliance.

The first is the matter of accountability of Australian governments to their citizens about a situation whereby our country has become ”inextricably” linked to nuclear weapons missions without the most serious public discussion or parliamentary scrutiny.

The second is how to assess the question of whether such fatalistic claims of irreversible involvement in US nuclear planning and operations are in fact correct, and not just a specious matter of political convenience.

Answering the second question is vitally important for Australia, lest politically convenient but intellectually weak technologically determinism substitute for serious public policy scrutiny. In the case of the Relay Ground Station at Pine Gap, due to built-in system technology redundancies, at least the most egregious example of Australian ”assistance’’ to US nuclear missions could technically and strategically be terminated plausibly without fundamental threat to genuine US strategic interests, and with that, the alliance.

To comply with the TPNW’s prohibition on assistance to nuclear weapons activities, an Australian government would have to undertake one of three possible approaches to the Relay Ground Station at Pine Gap:

All three would be examples of what former prime minister Malcolm Fraser proposed as a judicious partial disentangling of Australia from elements of the US alliance as an alternative to unquestioning acceptance of a specious automatic identity of Australian and US strategic interests.

Pragmatically, the politically critical question for Australia in each case, after seven decades of alliance deeply embedded into Australian political culture, is how treaty compliance could be achieved without leading the US to terminate the ANZUS mutual security treaty.

A ”maximalist” approach would be to give notice to the US requiring the closure of the entire base – ie both the two signals intelligence surveillance systems as well as the Relay Ground Station. Simply requiring the closure of the base as a whole would have the virtue of comprehensiveness, but would also be politically very difficult to imagine, even in a brief counterfactual thought experiment of this kind. Leaving aside arguments about the utility to Australia of access to the space-based and ground-based signals intelligence systems at the base that would be lost, the US response would undoubtedly be drastic, and would threaten the continuation of the alliance itself – which in Australian political culture would be deemed suicidal for mainstream political parties.

In a second, ”reformist’’ approach, the Australian government would have to request, and the US to accept, verifiable binding legal, organisational and technical limits on specific categories of the operations of the Relay Ground Station. This second approach would involve distinguishing ‘’defensive’’ functions of the OPIR system – primarily early warning of missile attack – from unarguably nuclear war-fighting Relay Ground Station links – primarily support for US nuclear missile second strikes.

For technical reasons to do with the automatic character of the Relay Ground Station and remote control of its operations from the United States (rather than from Pine Gap itself), the level of required verification of operational separation by an Australian government would, be almost impossible to achieve, to say nothing of the political obstacles.

However, there is a third alternative, a more promising ‘reformist’ approach to bringing the Relay Ground Station into compliance with the requirements of the ban treaty. This third approach is based on existing redundant communications links the United States has built into its global OPIR system of satellites and ground stations to guard against destruction of NC3 ground facilities like Pine Gap in war. The existence of communications redundancy indicates a strategically viable and politically not wholly impossible pathway to compliance with the TPNW without necessarily disrupting its alliance with the United States.

The Relay Ground Station at Pine Gap — which, like almost such facilities, is highly vulnerable to attack — provides redundant backup to both the cross-links and the mobile stations systems but is not in itself essential to the OPIR system’s survival. Pine Gap’s early warning satellites have satellite-satellite crosslinks and communications links to US relay satellites. These enable the crucial early warning data to be transmitted from one satellite to another and then downlinked to the Mission Control Station on US soil without ever relying on the Relay Ground Station. In addition, since 1997 US OPIR satellites themselves can and do downlink directly to dispersed mobile ground terminals in the United States, as well as to US combat commands around the world, including South Korea, Qatar, Italy, and Japan.

Under this proposal an Australian government could give reasonable notice to the United States requiring the closure of the Relay Ground Station and the removal of its systems from Pine Gap. The remaining larger part of the base and its principal signals intelligence functions would be left unaffected. In this situation, if the Australian government gave the United States appropriate notice — say five years — the Relay Ground Station could be closed without significant detriment to the performance of the OPIR systems or to genuine US national security interests — although there would obviously be considerable political turbulence.

Examination of the Relay Ground Station’s technical aspects and military roles suggests that while all three approaches would be politically fraught, the third pathway shows that the Australian government’s blanket claim that it would be “impossible, not practical for Australia to restrict roles under the alliance to non-nuclear missions” can be refuted in the most egregious example of Australian assistance to prohibited nuclear activities.

Of course, this proposal to close only the Relay Ground Station leaves questions about nuclear-related aspects of other parts of Pine Gap’s operations to be scrutinised, but by demonstrating a plausibly viable pathway in the most important case indicates a broader line of political and policy strategy against specious unexamined claims of “impossibility”.

This is part three of an edited extract from Richard Tanter’s submission to the Independent and Peaceful Australia Network People’s Inquiry in US-Australia Alliance, September 2021. Reads parts one and two. Next: Pine Gap as nuclear target — then and now.