Dark side of politeness: Grace Tame’s act of defiance Primatologist Frans de Waal writes in his book The Bonobo and the Atheist that “the original primate signal to make clear that you rank below someone else is a grin with the mouth corners pulled back”, and that this is an “intensely social signal that mixes fear with the desire for acceptance”.

No one would suggest that human smiles serve this same singular purpose. We smile with joy, with surprise, when laughing, when nervous, when we want to be seen to be happy. When we think it’s required for the circumstances, we can “force” a smile.

One of the most important differentiators of humans from our primate cousins is that our communication is highly complex.

To summarise vast realms of linguistic theory and research in a single phrase: context is everything.

When humans interpret facial expressions — or any communication — they need to be careful they are not ascribing intention without thinking or feeling through the other person’s experience, emotional and cultural context. These are the acts of cognitive and affective empathy. They can require exertion.

The difference between autistic and neurotypical communication is very poorly understood. When autistic people work to try and match what we think the majority culture expects, this is called masking. Masking is the effortful matching of facial expressions, body language, voice, tone and word choice to the situation. While everyone makes this attempt, in autistic people failure is frequently judged harshly.

Neurotypical humans also have gendered expectations which differentiate how men and women should behave. In the dominant culture, women are expected to smile at all costs, to be friendly and ‘sociable’ regardless of any emotional pain they are suffering. Fortunately, as Katharine Murphy and other commentators have noted, some younger women are less likely to conform to these sexist conventions.

Then there are the hierarchical expectations. Here too, autistic people usually do not pay so much attention to this social construction; that’s why we can be so good at speaking truth to power.

Australian culture has a mythology that is egalitarian, anti-authoritarian, but it’s also strongly patriarchal. There’s a conservative commentariat who believe the patriarchy is under threat and needs to be reinforced.

It’s possible that all of these considerations played a role in commentators Parnell Palme McGuinness and Peter van Onselen labelling 2021 Australian of the Year Grace Tame “childish” and “rude” over her stony expression towards Prime Minister Scott Morrison last week.

This is what linguist Paddy Austin termed the dark side of politeness, “language to encode power and communicate assumptions about social behaviour and status”.

What could be other interpretations of Tame’s expression?

Imagine you have experienced abuse from an older man in a formal position of power who was devoid of empathy. Then you meet with a prime minister known for his poverty of empathy, his lack of tangible action on violence against women and children, and his political protection of an alleged rapist. This could be triggering. It’s possible Tame was holding it together to avoid the temptation to turn her back, avoid his handshake and run from the event or to lash out in self-defence. Anyone who has experience of trauma understands how triggering works.

It’s possible Tame doesn’t respect the prime minister, for all the reasons above and more, and her face simply reflected that fact.

Most likely, Tame made the deliberate decision not to mask as an act of defiance. To show the world that she wasn’t happy to greet a man who has had so little consideration for victim-survivors and advocates, and she didn’t want to “play nice”. Tame has theatre training. She knows what makes a dramatic moment. She knows what it is to mask, what it is to comply with societal expectations, especially because she’s an autistic woman.

Tame didn’t conform to a patriarchal or authoritarian view that young women should bare their teeth in supplicant behaviour to older men in higher positions of the formal hierarchy.

That doesn’t make her rude.

It might make her revolutionary, depending on your perspective.

Human meaning is a multi-layered thing.

A bit more attention to this fact could do a lot to make Australia a more compassionate place, prime minister. 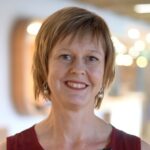