The spread of militarism does not just involve creating the specific apparatus of war.

As the Western allies flirt with starting World War III in Syria, it is worth examining some of the financial and business dynamics behind the United States’ ‘military industrial complex.’ 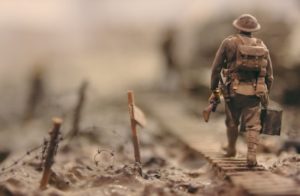 War may not be good business, but it is certainly big business. And in contrast to Russia and China, the war industry in the US is heavily privatized, including the use of mercenaries.

It is bigger than the next 15 biggest countries’ combined outlays, four times China’s level and ten times Russia’s. And that is just military spending.

As Alexander Nekrosov commented, the CIA’s budget is $US44 billion a year, which is about two thirds of Russia’s military budget. America is a warrior nation like no other: it has been at war 222 out of its 239 years.

Then there are the bases. Depending on how you count them, America has between 800 and 1000 military bases, giving it leverage, if not control, over 191 nations.

Russia has only a handful, mainly across Central Asia, although it has been establishing new ones in Syria. China has almost none. The US bases are presented as being part of America’s investment in defence, but it looks much more like offence.

Then there are the munitions output and the body count — what we might call the business operations. In the past 16 years, the US has invaded, occupied and dropped 200,000 bombs and missiles on seven countries.

If the overall impact is considered, and not just the immediate casualties from the combat (an epidemiological approach) the death toll is estimated to be more than two million (and maybe as high as five million).

Then there is the co-opting of public and political life. Military providers depend almost totally on sales to their governments, with of course America being the biggest buyer.

This represents an extremely lucrative market, but to make sure that it will buy it is necessary to persuade politicians and the media that there is a constant threat that must be met with ever higher spending.

This does not prove too difficult. Even basic logic is easily taken out. Thus we see the recent bombing of Syria justified as teaching Assad a lesson that goes something like this: ‘Because Assad appears to have killed Syrians, we have to punish him by killing more Syrians.’ Lewis Carroll’s Queen of Hearts would thoroughly approve.

The spread of militarism does not just involve creating the specific apparatus of war. There is a huge parallel industry in false-fact creation and spin. This goes back decades, but a recent example was the revelation that in 2016 the Pentagon paid PR company Bell Pottinger to deliver propaganda during the Iraq war.

That is only one instance of many. Some of the people involved with the infamous Cambridge Analytica seem to have been involved in various types of psyops. The Pentagon lists control of information as one of its core operational activities, which encompasses heavy influence over the media (along with intelligence agencies) and influence over Hollywood.

It is true that there are bigger industries. Military expenditure, plus spending on veterans, only accounts for about a quarter of the total US federal budget. Defence equates with about 3.5 per cent of the nation’s GDP, smaller than finance and health.

But as a business, the military is distinct, and it has unusual effects. Economically, military investment is dead money. Unlike other industry sectors, there is no domestic multiplier effect, it does not stimulate further economic activity. Either the weaponry is used to destroy the economies of other countries, or it lies idle.

Because the business imperative is to fight wars, thus creating demand for its products and ‘services,’ it has an incentive to corrupt the rest of the polity. It is necessary to sustain a sense of urgency about resorting to violence, which has in recent times meant destroying moral conscience.

Thus we see the absurdity of action against the Assad government, because they have allegedly killed children, by a Western military that has specialised in killing children. Madeleine Albright’s infamous comment that killing 500,000 Iraqi children was ‘worth it’ said it all. The word hypocrisy hardly seems to cover it.

Such ethical failure is a measure of the military’s commercial effectiveness. The ultimate aim of the industry is to convince us that ‘we’ are the good guys and ‘they’ (the targets) are the bad guys. That way, no matter how illegal or unjustified the attack, it is always right.

To that extent, the military industry now represents the greatest threat to Western morality — a morality that is rendered meaningless if it is not also applied to our own actions.

This article was first published in Eureka Street and La Croix International on the 21st of April, 2018

David James is the managing editor of businessadvantagepng.com. He has a PhD in English Literature and is author of the musical comedy The Bard Bites Back, which is about Shakespeare’s ghost.

This entry was posted in Defence/Security, World Affairs. Bookmark the permalink.