It is often claimed as fact that private schools outperform public schools. New analysis of MySchool data and 2017 Victorian Certificate of Education year 12 results shows that public schools with similar Index of Community Socio-Educational Advantage (ICSEA) rankings or Socio-Economic Status have very similar or even better VCE results than private schools. However, these public schools achieve these results with far less funding per student.

Those who argue in favour of public funding for private schools claim that private schools are more efficient and academically outperform public schools. So what is the actual return on investment for parents when it comes to private schools? The conservative side of politics believes there is no equity problem to address in Australian education. The Liberal Party relies on conservative researchers’ evidence denying any causal link between socioeconomic status and student academic outcomes.

New analysis of the Year 12 results “school ladder” compares 455 private and public schools (schools with fewer than 20 students at year 12 were excluded) based on their VCE ranking and then compares both their VCE results and school based data including funding available from MySchool website.

Table 1 (below) ranks Victorian schools VCE results of similar or “like” private and public schools and median score, per cent of 40+ scores, total government (Federal and State) funding per student as shown on the MySchool website and Year 12 fees found on individual school websites.

Table 1. 2017 VCE results by ICSEA a scale which allows for fair and reasonable comparisons among schools with similar students. ICSEA stands for the Index of Community Socio-Educational Advantage. 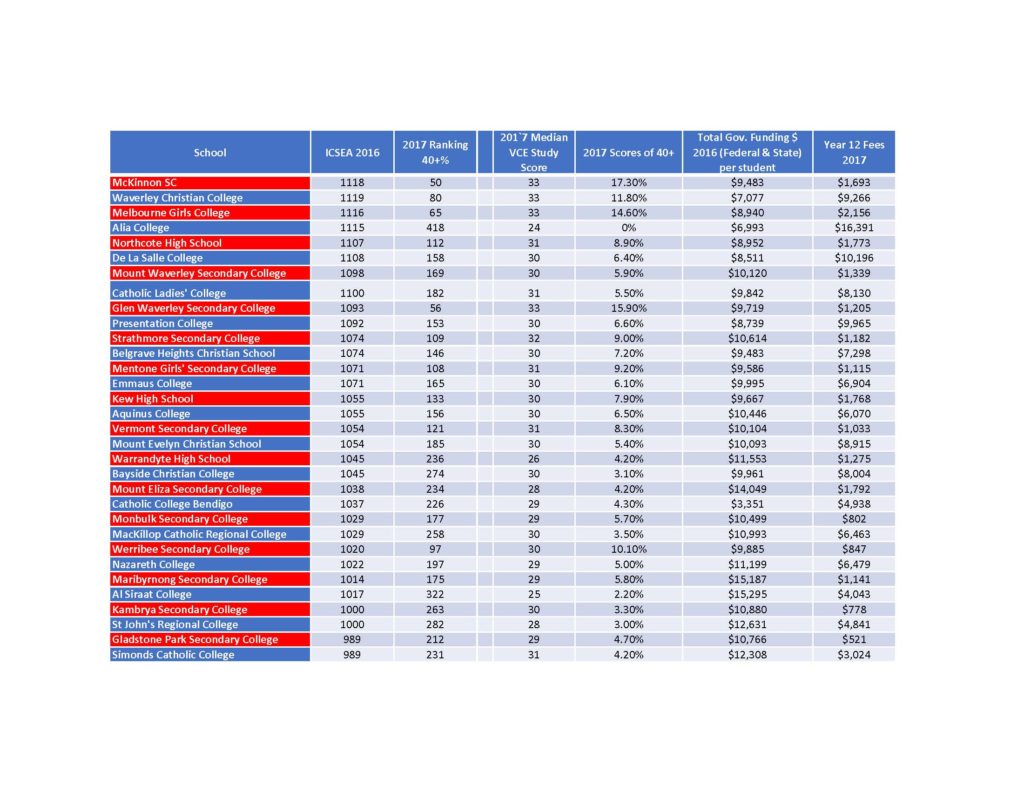 While most media base rankings on the per cent of scores over 40, a more robust statistic is the median VCE score achieved by each school. That is the score achieved by the exact middle student in the year 12 class when their scores are ranked from lowest to highest. The median is a better indicator of overall student performance as it is not affected by relatively few high (or low) performances.

When it comes to funding, private schools on average outspend public schools by a minimum of $9000 per student to achieve a similar result with almost 50% of their funding coming from federal and state funds for independent schools and almost 80% or more for Catholic schools. The School Resource Standard base amount is set at $13,764 for secondary students in 2018. This is what the majority of public schools receive from government funds. Table 2 lists the 22 most expensive private schools and their corresponding VCE ranking. On average in top performing private school parents paid over $25, 000 per student (Geelong Grammar with an ICSEA of 1149 ranked 124 in Victoria out of 455 schools and was the most expensive school in Victoria charging $36000 in 2017 just for school fees for year 12 (non-boarding) while parents in high performing public schools paid less than $1300. Wesley College ICSEA of 1159 charged almost $35000 and ranked 130 (Glen Waverely campus) and 78 (Melbourne Campus.

It is also claimed by conservative commentators – notably Dr Kevin Donnelly – that socio-economic status has little impact on student academic performance. This analysis of the 2017 VCE results clearly demonstrates that school performance is very strongly correlated to the socio-economic index of the school. The higher the ISCEA the better the school performs in VCE. There are however some exceptions to this as is shown in Chart 2

Spending more money on students and on school buildings, well-being centres, international campuses, playing fields, equestrian facilities, rowing sheds, music centres and swimming pools seems to make no difference at all when students have similar social and Jane Caro recently asked, “If money makes no difference to education, why do private schools need so much?” 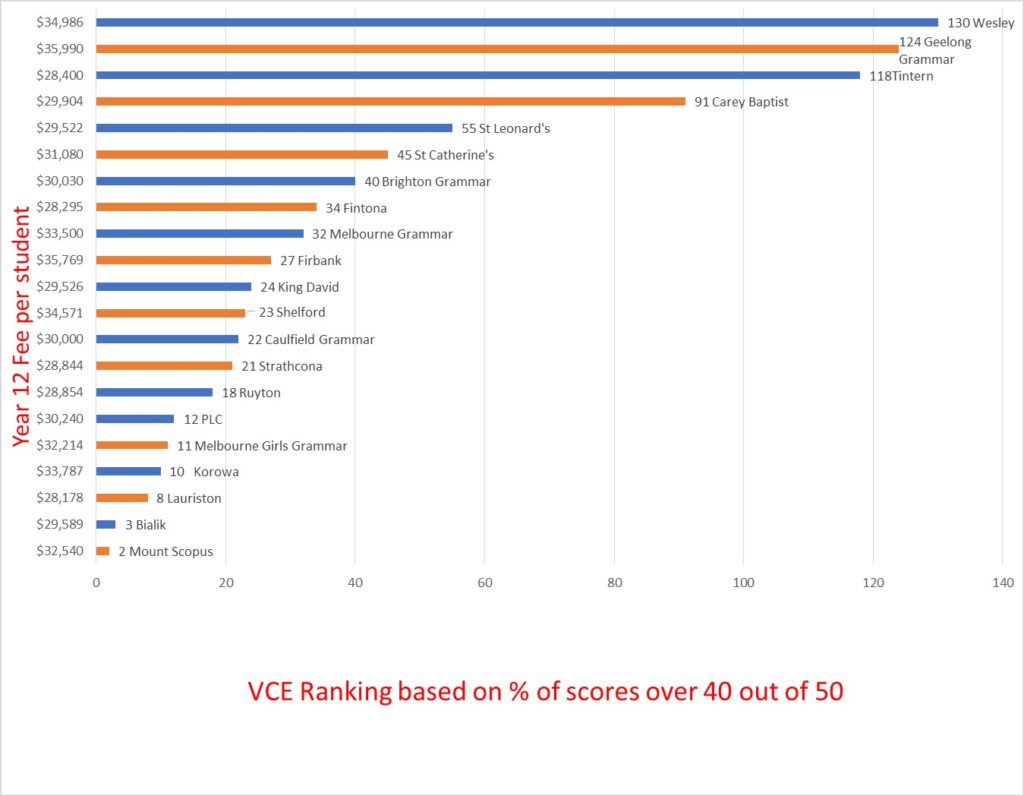 A new review of research studies has found that money matters in education. It shows that there is strong evidence of a positive relationship between school funding and student achievement and that certain school resources that cost money have a positive influence on student results. As well, more equitable allocation of funds between schools increases equity in student outcomes.

The best-performing education systems worldwide are those that combine equity with quality. They give all children opportunities for a quality education.