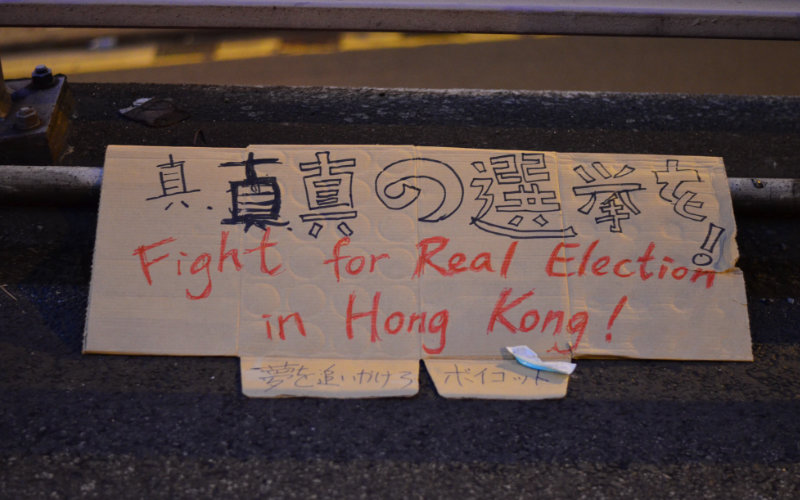 Hong Kong will hold elections to a newly enlarged Legislative Council in December. This is the first election held since Beijing enacted national security legislation for the territory in June 2020. It is doubtful that Hong Kong’s pro-democracy “pan-dems”, who dominated the former legislature, will win even a handful of seats. If they do, they will form a token opposition but Beijing is not wholly to blame for this. pro-democracy activists must also shoulder the blame.

Ten years before the 1997 handover of Hong Kong to the People’s Republic of China, Deng Xiaoping, Chairman of China’s all-powerful Central Advisory Commission, expressed scepticism of British attempts to enshrine a future democratic system in Hong Kong. In a speech to drafters of the Basic Law in 1987 he said:

“After 1997, we shall still allow people in Hong Kong to attack the Chinese Communist Party (CCP) and China verbally, but what if they should turn their words into action, trying to turn Hong Kong into a base of opposition to the ‘mainland’ under the pretext of ‘democracy’? Then we should have no choice but to intervene.”

Deng, like most leaders of the CCP, was highly suspicious of Western democracy and capitalism. Xu Jiatun (who later defected to the US), then senior representative of the CCP in Hong Kong, revealed this in an article published in the Hong Kong Wen Wei Po newspaper on 20 March 1988:

“They always judge capitalism by old standards. They do not notice its changes. Had I not worked in Hong Kong for four years, I would probably have entertained the same ideas as those comrades. In short, some of our colleagues know too little about and are too fearful of modern capitalism.”

Xu’s comments were in reference toChinese leaders who had no experience of ‘democracy’ and doubted British commitment to it – Britain had governed Hong Kong for more than a century without any elected legislature. It was this mindset that led to Beijing adopting a gradual approach in their negotiated agreement with Britain.

The Basic Law, originally passed by the China National People’s Congress in 1990, provided for limited 50-year autonomy in Hong Kong:20 of the 60 members of the Legislative Council (LegCo) were to be directly elected, then 24, then 30 by 2007, leaving open the possibility of further change. 2007 was also flagged as a point at which Hong Kong people might be able to elect the Chief Executive. This timetable has not been adhered to. Instead the central government has invoked the clause of the Basic Law that permits the central government to intervene in Hong Kong’s affairs.

The pan-dems were equally distrustful of Beijing. Before the handover, they objected to Governor Chris Patten’s proposals to tweak the Basic Law, saying he did not go far enough. After 1997, they continued to call for universal suffrage and opposed the undemocratic appointment of the first Chief Executive Tung Chee-hwa.

Acting on those underlying suspicions voiced by Deng, Beijing officials undid Patten’s reforms by rejecting his proposal whereby the old Legislative Council would continue in office and insisting on a new election Half of the legislature that was indirectly elected by functional constituencies proved their worth during the Asian financial crisis of 1997-98, while pro-democracy legislators had little to offer in policy terms. From that point on, Beijing never engaged with the directly elected PanDems, so lost touch with community sentiment in Hong Kong.

As students and idealists became impatient with the LegCo talk fest, the pan-dems split into factions.Youths took to the streets, angry about overcrowded hospitals, exorbitant rent, the lack of employment and democratic elections. Resentment of mainlanders grew. Hotheads called for a return to British rule or even independence, neither of which was remotely possible.

Article 23 of the Basic Law states:

In 2003 the Hong Kong government proposed but then withdrew a controversial National Security Bill to accord with the provisions of Article 23 after it became clear it could not be passed. After this, there were calls for the bill to be reintroduced.Protests grew, culminating in the “Umbrella Movement” of 2014. In 2016 pro-democracy and localist legislators used their swearing-in ceremony in LegCo to mock the central government. In one instance, in direct provocation of Article 23, they unfurled a banner reading “Hong Kong is not China’.

Chief Executive Leung Chun-ying responded by announcing that the Security Law would be re-introduced. Deng’s fears of Hong Kong becoming a base for anti-China organisation and action seemed to be realised, with outside governments becoming involved and the US admitting to providing financial support and training to protestors through organisations such as Open Technology Fund and the National Endowement for Democracy.

LegCo having failed to fulfil its obligations as set out in the Basic Law, China’s central government enacted its own security legislation in June 2020. LegCo elections scheduled for September 2020 were postponed, with the Hong Kong government citing Covid-19 as an excuse. A revamped electoral system was announced in March this year, with a new-style Election Committee to be set up in September, elections rescheduled for December, and the selection process for a new Chief Executive to begin in March 2022.

Candidates must meet the criteria in the national security legislation and seek nomination from the Election Committee, meaning pro-democracy candidates will have to request endorsement from pro-Beijing appointees.. Pro-democracy activists in custody awaiting trial are unlikely to be able to contest the election. Only the few willing to work within the system,such as Anthony Cheung and Ronny Tong, stand a chance of being elected.

In the 1990s, when I was discussing the future shape of Hong Kong’s legislature with a mainland Chinese official, he remarked, “We are not against democratic elections. We just like to know in advance who is going to win”. This highlights the growing communication gulf between Beijing and the people of Hong Kong and between China and the West in which it cannot be assumed that words such as “democracy”, “security” or “human rights” carry the same meaning for both speaker and listener.