In this extract from her new book, The Palace Letters, Professor Jenny Hocking reveals key entries from dissident Liberal Senator Alan Missen’s ‘highly confidential diary on the 1975 constitutional crisis’. Five Liberal senators had resolved to abstain from a direct vote on the government’s supply bills, which would have enabled the bills to pass, just days before the dismissal of the Whitlam government.

A rare early-morning snow was drifting across Canberra, the café windows turning to mist from the people crowding around to watch snow falling in Kingston. It was mid-2017, shortly before the second day’s hearing in the Federal Court against the National Archives seeking the release of the Palace letters between the Queen and the Governor-General Sir John Kerr. I was deep in the papers of the former Liberal senator Alan Missen, who had refused to support Prime Minister Malcolm Fraser’s efforts to exclude all governors-general’s records from the reach of the Archives Bill, a position which would have kept all of Kerr’s exceptionally significant archival records out of public view.

Missen was one of the core group of dissident Liberal senators in 1975 vehemently opposed to Fraser’s decision to block the Whitlam government’s supply bills in the Senate – ‘the nearest thing to wrecking democracy’, Missen had termed it – and who were threatening to break ranks and pass supply the longer the stalemate continued. I found it impossible to separate Missen’s opposition to Fraser’s Archives Bill, which would have kept all of Kerr’s papers about the dismissal secret, from his determined opposition just three years earlier to the blocking of supply and the dismissal. And so, as we waited for the Federal Court judgment to be delivered, I returned to Missen’s papers with its manuscript boxes bursting with draft Archives Bills, committee reports, draft amendments, and second-reading speeches, curious as to the strength of Missen’s conviction that the governor-general’s records should be in the Archives and open for public access.

Missen had always been something of a rebel in the Liberal Party, pushing for its ‘small-l’ liberal side against the hard-line conservatives of the old United Australia Party. He had caused an outcry in 1951 with his strident opposition to prime minister Robert Menzies’ multiple efforts to pass the Communist Party Dissolution Bill, and had actively campaigned against the government’s unsuccessful referendum to pass it. Two decades later, Missen again agonised over his party’s political tactics with the Coalition’s unprecedented decision to defer the government’s supply bills in the Senate, deeply concerned by the breach of convention. In early October, ‘I urged the party not to agree to the course proposed, which I felt was, both in principle and practice, to be deplored’, Missen wrote.

Throughout that vital month, Missen waged an internal campaign against this contentious tactic as rumours raged that he and other Liberal senators were on the verge of crossing the floor and allowing the budget to pass. Nevertheless, none of the doubting senators spoke out publicly, and the budget was duly deferred. Over the succeeding years, rumours that there had been a group of Liberal dissidents set to vote against their leadership resurfaced intermittently, only to be denied and advanced in turn with every posthumous confession and new revelation in the history of the dismissal.

It was while I was searching through Missen’s records on the draft Archives Bills that I came across a document that answered these competing claims about the rogue Liberal senators. Another missing piece in the dismissal history had finally emerged. Missen’s position on supply had become a marker for the partisan claims that passed as history in the decades after the dismissal. Those who supported Fraser and Kerr’s actions emphatically denied that Missen or any other Coalition senators would have crossed the floor, claiming that, ‘Missen had no intention of crossing the floor and voting against the Malcolm Fraser-led opposition on this issue. Others insisted that a small group of Liberal senators were set to break ranks and allow the budget to pass, and that only Kerr’s actions had prevented that final capitulation.

Missen’s biographer, Anton Hermann, neatly glides over the month in which supply was blocked, as though Missen had barely raised a murmur against it in the party room in early October, before accepting the party line: ‘During the 1975 constitutional crisis, he opposed the Senate’s withholding of supply from the government, although he reluctantly voted with the Opposition on procedural issues.’

Missen’s close friend and colleague Peter Baume suggests otherwise: ‘Of all these doubters, Missen was the one of greatest clarity of view and experience. He was a man of courage and determination and I wonder how long it would have been before he, or one of his colleagues, would have cried “enough”. We will never know.’

Well, we do know. Missen’s papers answer the burning question of whether the rebel senators would have allowed the budget to pass. Among Missen’s papers is a single typed document, a personal diary entry headed ‘Confidential. Diary entries in respect to the constitutional crisis – October 1975’. It begins: ‘This is a record for future reminder, of events which have transpired in recent days, concerning the decision of the Opposition Parties to defeat, or delay, the Budget. It is highly confidential, and is retained for historical purposes.’

Missen’s diary vindicates the view that a political solution to the crisis was at hand and that the Senate was about to ‘break’, and refutes the historical claims of both Fraser and Kerr that the Senate would never have passed supply. Missen recounts that he, together with four fellow dissident Liberal senators – Jessop, Bessell, Laucke, and Bonner – had made a pact, just days before the dismissal. Missen writes, in his entry for the week ending 3 November 1975, that ‘a bleak position’ for the opposition had developed, and if ‘it was a choice between voting for or against the Budget Bills, we would all abstain and allow the Budget to pass’. The five rebels had ‘quietly reached this resolution on the Tuesday’ – that is, one week before the dismissal.

Hermann cites this diary in confidently asserting that Missen ‘adhered to his original strategy by refusing to break ranks on the floor of the Senate’, making no reference to the wavering senators’ later agreement shortly before the dismissal that, if faced with a choice of voting for or against the budget, they would abstain. Hermann ignores the shifting positions of the five doubters, their anguish and sense of betrayal of their political principles, and the resolution they ‘had quietly reached’ the week before the dismissal. This agreement would have had critical consequences for Whitlam’s decision to call the half-Senate election, had that election been granted contingent on the passage of supply.

The unexpected detail in Missen’s papers about the intentions of the rebel senators also added to the growing questions over what Kerr was telling the Queen about these manoeuvres in the Senate and over the prospect of a half-Senate election. It is often forgotten that Fraser had already publicly stated on 22 October 1975 that he would respect whatever decision the governor-general made, later conceding that if the half-Senate election had been called he would have resigned the Liberal leadership, and the budget bills would have been passed: ‘What we would have done is to let Supply through.’

Fraser’s treasurer, Phil Lynch, had also acknowledged this in an unpublished interview with the journalist Alan Reid: ‘If the GG had made a decision for a half-Senate election, yes … there was not much we could do about it. It would have been’, Lynch told Reid. Asked whether they would then have granted supply, Lynch replied, ‘We would have.’ 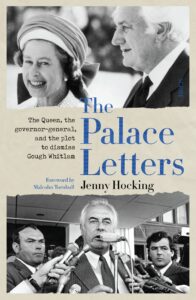 This is an edited extract from The Palace Letters: The Queen, the governor-general, and the plot to dismiss Gough Whitlam by Jenny Hocking (Scribe, $32.99), out now.