Don’t Mention the Ban: Australia’s evasion of the Treaty on the Prohibition of Nuclear Weapons

Australia has disagreed with its major military ally on the prohibition of other unacceptable weapons and we must do so again. If our alliance requires allegiance to weapons of mass destruction, who does it really serve?

The Treaty on the Prohibition of Nuclear Weapons is a gamechanger. It puts all nuclear-armed states in breach of international law, along with any state that includes these weapons in its security doctrines. It coalesces regional nuclear weapon free zones, builds upon other nuclear arms control agreements and in 10 simple pages condemns any activity that condones nuclear weapons.

This agreement is not a vision statement, an aspirational manifesto nor a watered-down outcome document from a conference. It is a comprehensive, UN-negotiated Treaty, set to become permanent international law on the 22nd of January, 2021.

Besides the prohibitions, it sets out positive obligations that states parties must fulfil, and a framework for the negotiation of stockpile elimination with nuclear-possessor states. Upon entry into force, states parties will be bound by their treaty obligations. States parties will be obliged under Article 12 to seek universality, by encouraging states not party to ratify the treaty. This could take place during international fora or bilateral meetings. Any that do not already have a comprehensive safeguards agreement in place with the International Atomic Energy Agency will be obliged to complete one, and states parties that have signed up to the Additional Protocol will be obliged to maintain it.

For the first time, states parties will be obliged under Articles 6 and 7 to cooperate on addressing the long-term harms inflicted on bodies and the environment by nuclear weapons use and testing. This assistance will be provided according to capacity, with an obligation upon states that have conducted nuclear testing programs.

Australia did not participate in the negotiation of the TPNW and continues to avoid parliamentary efforts to debate the matter, including the denial of motions proposed by Greens and Labor members of parliament in November 2020. The website of the Department of Foreign Affairs carries one paragraph on Australia’s view of the TPNW. This one paragraph is brief yet riddled with misrepresentations, all of which are countered in a new ICAN publication For the record…

Australia presents itself as a country committed to nuclear disarmament, while at the same time claiming the US nuclear arsenal is essential to its security. This is a contradictory position and our leaders know it. The TPNW exposes such hypocrisy by rejecting any legitimate role or purpose for nuclear weapons, which is what Australia’s reluctance boils down to. Any nation that countenances the potential use of nuclear weapons in its name is delaying progress on disarmament. Efforts to compel the nuclear-armed to disarm within existing agreements have clearly failed.

There are some who truly believe Australia’s security stems from the US nuclear arsenal, despite no clear undertaking that the US would indeed defend Australia with its nuclear weapons. For those people, closing the “nuclear umbrella” is an intolerable leap of faith. For the global majority, every day in a world armed to the brink with nuclear weapons is unacceptably risky, with prevention the only option, and elimination the only guarantee.

Some 122 nations voted to adopt the TPNW in July 2017, rejecting the minority rule of the nine nuclear possessors. Since then, despite the best efforts of some within the industry-funded defence think tanks, Australian appetite for a nuclear-free foreign policy continues to grow.

A July 2020 Ipsos opinion poll found 71% of Australians in favour of joining the TPNW, with only 9% opposed. All levels of government are engaging with the issue, from local councils to federal parliamentarians, 88 of whom have pledged to work for Australia to join the ban. The Australian Labor Party has committed to sign and ratify the treaty in government. Dozens of unions, religious, medical, humanitarian and environmental organisations have joined the movement, including the Australian Medical Association, Australian Red Cross and Australian Council of Trade Unions.

In the days before the TPNW acquired its 50th ratification, the threshold for entry into force, the US Administration wrote to all states parties suggesting they had made a “strategic error” and urging them to withdraw. This desperation is surprising but the intent is not. The nuclear-armed states will continue to oppose the ban in myriad ways.

Australia has disagreed with its major military ally on the prohibition of other unacceptable weapons and we must do so again. If our alliance requires allegiance to weapons of mass destruction, who does it really serve? The Treaty was negotiated specifically to allow ongoing non-nuclear military cooperation between allies. Australia is under no legal obligation, under the ANZUS Treaty or otherwise, to maintain a policy of nuclear “deterrence”. Far from protecting us, such a policy compounds the risks posed by cyberwarfare, technological failure or the whims of nuclear-armed leaders now and into the future.

The treaty has popular support, clarity of purpose and a coherent pathway forward. No, this is not another commission, talk-fest or vague “initiative“. The ban provides Australia with the mechanism to make its most powerful contribution to nuclear disarmament in decades. Our best position to leverage pressure on the nuclear-armed is from within the tent of the prohibition treaty.

The first meeting of states parties to the treaty must occur within one year after the 22nd of January 2021, the date of its entry into force. Austria will host the first meeting and invite all states, with the option for non-states parties to attend as observers. Australia must join the ban, and a first step would be to accept Austria’s invitation to engage. The tide is turning against nuclear weapons; we’d better swim with it. 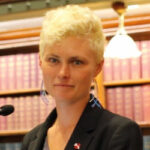 Gem Romuld is the Director of the International Campaign to Abolish Nuclear Weapons, Australia. She has worked with Australians for War Powers Reform and 3CR Radio. She has degrees in communications and law and is based in Sydney/Wollongong.