Our society is opting out of debate through the machinations of a neoconservative credo that purports reason. Under the guise of the spectacle of freedom and democracy, such dogma exploits public disorientation following massive collective shocks to achieve control, by imposing economic shock therapy to affect change.

The resulting profiteering bubble of a few private hands appropriating public wealth is often accompanied by exploding debts. The threat of a disenfranchised populace left outside the ‘profiteering bubble’ prompts the need for aggressive surveillance to protect the interests of the profiteers.

The $270 billion defence spending announcement at a time of budget deficits in excess of $85.3 billion dollars manifest a security frenzy clutching our national psyche. It raises age-old questions regarding dissent, resistance and autonomy – especially, that national security per se is not bound by ideology, as state and non-state actors from all persuasions are all alike in maintaining strict security arrangements.

The French theorist Paul Virilio (1977:47) recognised this frenzied obsession with security when he coined the term “Dromology” from “Dromos” the Greek word to race, to describe how speed restructures society in favour of what moves fast to dominate, that which is slower

“.. whoever controls the territory possesses it. Possession of territory is not primarily about laws and contracts, but first and foremost a matter of movement and circulation ..”

He argues that a dromological state of crisis results in a culture obsessed with security and speed; on who can protect themselves best and fastest. In essence, a technological arms race. This presented global capital with a new opportunity, namely investment in the technological production of weapons, security tools and security provision.

The composite experiences of security in a modern society are not only institutional, but also a personal subjective experience. The complexity of personal feelings of fear and safety intensifies with security warnings, like “If You See Something, Say Something” that used to be plastered around train stations in New York and Sydney post September 11th, 2001.

Naturally, this breeds anxiety or ontological insecurity (Sennett 2006:161). It is the fear of what will happen even if no disaster looms. This is also referred to as ‘free-floating’, to indicate that someone keeps worrying even if one has nothing to fear in a specific situation.

Unsurprisingly, the U.S. Department of Homeland Security has even designated September 25th as national “If You See Something, Say Something®” Awareness Day to “inspire, empower and educate the public on suspicious activity reporting”. Ulrich Beck (1992:129) recognised that ontological insecurity is due to our heightened awareness of risk in society, and divided modern civilization into pre-industrial, industrial, and a “global risk society”, suggesting that today we feel powerless to minimise those risks.

Lasch (1984:23) described the mental state that we adopt to cope with this ‘insecure’ world, as a ‘survivalist mentality’. In a world hijacked by fear and impending catastrophe, individual survival requires safety, thus one becomes risk averse, which ingrains passivity as a desired state of existence, and dissent becomes a security concern. Any wonder the sweeping national security laws against espionage, sabotage, foreign interference and harmful foreign influence on Australian political life.

David Garland (2001:139) predicts a future where our control, through a surveillance culture becomes an ‘iron cage’ for us all. The result is a dark age of fear that serves the informational ‘datalords’ controlling the security zones. He argues that in the United States, the Global Positioning System (GPS) technology enabled the possibility of ‘virtual prisons’, where more than 2 million people were incarcerated in mostly privatised prisons. So, it wasn’t a surprise that mobile phone location data were used to track Australians’ movements during the coronavirus crisis.

Surveillance technology, commonly perceived in terms of privacy has a more sinister side, in terms of the discrimination resultant from socio-economic and political ‘sorting and exclusion’. In the past, Orwellian and Foucauldian perspectives provided a largely centralized understanding of surveillance, but new technologies and the networked social organisation, has given rise to a loose and flowing rhizomatic set of processes, rather than a centrally controlled and coordinated system (Deleuze et al. 1980:31). The controlling centre, in this networked decentralized system, has become an Occult, which “is not occupied by a known leader or a clear ideology” (Debord 1997:54).

The question is whether surveillance and the evolving hegemony of security technology is a direct result of the neo-liberalisation of markets? The neoliberal prescriptions engender strict monitoring and control of resources in order to optimise resource allocation in society, and to protect the profiteering bubble from the disenfranchised populace that has been subjugated to inequity and unfair distribution of wealth.

First, the optimisation of resource allocation will inevitably polarise the world along a profiteering bubble and a controlled pacified populace, under the guise of, say, the spectacle of global economic crises and economic austerity programs. Crises are essential to the very existence of the Capitalist system, because they provide it with the ethical meaning, such as that of the perpetual idea of “scarcity of ‘economic’ resources”. The systematic alternation between the two states of shortage and abundance makes neither retain a reference, nor therefore an antagonistic reality (dissent), while the system is indifferent to their deployment, in so far as preserving its own (Capitalist) existence.

Secondly, the monitoring of resource allocation (‘scarcity-abundance limits’ on say food, water and energy), and the control of consumption (limiting the consumption of food, water and energy through resource price manipulation?) will take place at an individual level, not only to promote productivity and efficiency, but to also prompt compliance in the individual (especially the dissenting disenfranchised populace) through economic deterrence.

One must then ask if the evolving hegemony of security technology is also due to a networked security-industrial complex on a global scale, which threatens to polarise the world along a profiteering bubble and a controlled pacified populace, under the guise of an international security threat, such as the ‘war on terror’ soon after September 11th and now a ‘war on China’. If so, then are we witnessing the rise of a new world order propelled by the polarising effect of militarising information and telecommunication technologies, as with the $1 billion dollar spending on cyber security by the Australian Government?

If history progresses at the speed of its weapon systems, then could this online arms race spell the end of freedom? Distance, that once sheltered us from the invasions of the barbarian hordes of afar, is no longer a deterrent with new technologies. The localized physical space that once protected local jobs, for example, ceases to protect workers from the technologically efficient ‘armies’ that are driven by ideologies, economics and speed facilitated by technological innovation. Swift victory, or efficiency, is ensured if you deploy resources rapidly: money, skill, ideology or weapons.

George MICKHAIL is an LSE trained academic and a geopolitical risk analyst with 30 years’ experience in major global accounting firms and business schools. His research focuses on MetaCapitalism and mapping the geopolitical threats of global financial networks. He comments regularly on political economic affairs and his research is cited in the media. 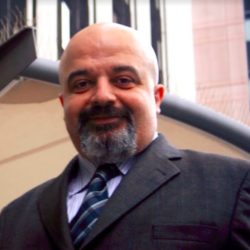