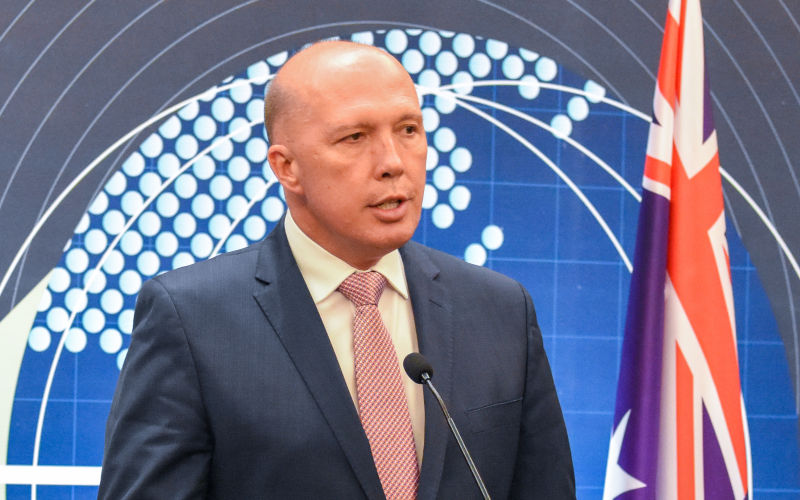 Imagine the day when an NACC investigation reaches the point where it becomes known, perhaps from a leak, that a Labor minister and her office are under investigation. Maybe selling access to the minister for clients with interests to press with the minister.

The spokesman might be a politician who has previously spoken virtuously about kangaroo courts, and of the risks that a person’s reputation might be damaged before the commission had had the opportunity to clear her of the allegations made. One would quickly discover that the coalition’s tender regard for reputation does not extend to Labor ministers. That the firm politics of principle were but tactics operating only while it suited. That Dutton is a more wily and slippery character than Dreyfus had judged.

With ultimate chutzpa, Dutton might go to the election promising a more open, accountable and powerful NACC. This might immediately find him some allies, including teals and others deliberately shut out of the NACC legislation debate, who plan to continue arguing for amendments. Remember that a good many teals regularly vote with the Liberals to demonstrate that they are a protest Liberal Party, not a shadow Labor Party.

Dutton might well reason that the only party which could now be hurt by public hearings would be Labor in government. He, or his successors, could deal much later with any problems facing an incoming coalition administration six or nine years hence. In the meantime, the Liberals could look bold on public accountability, with Labor the party resisting.

Dreyfus, or Albanese, might argue that the electorate should simply not believe a Dutton turnaround on such a matter.

If they think this, they would be wise to look again at the example of the states. Labor, under Anna Bligh lost office with only a handful of members returned, sunk by scandal and maladministration. It was back in office after only a term out of power. Serious and systemic scandals in Labor in NSW, resulting in heavy electoral defeats followed by a return to favour. Likewise with governments, Labor or coalition, in West Australia, South Australia, and Victoria. It is not as if the public forgets. Or that it fails to remember the hypocrisy of some newly converted member who was previously up to his neck in skulduggery. It is that the sun sometimes bleaches bad politicians, particularly once the performance of their rivals is on view.

A time will come when Mark Dreyfus modestly accepts the label of being father of the anti-corruption commission. He will make much of the breadth of his public consultations, while putting a heavy veil over the fact that he deliberately ignored the advice of experts and supporters of the legislation. He will attempt to embellish the impressions with further integrity legislation, such as whistle-blower legislation, which I expect will be completely useless, and drastic reform of the structure of the Administrative Appeals Tribunal. He might, though I doubt it, even make some changes to national security laws, especially those focused on secret and unaccountable trials.

NACC is not Labor’s child and Labor will not be good step-parents. The true parents are outsiders, independents and the teals, all frozen out of the delivery rooms.

The NACC was not a Labor idea. Not Dreyfus’s or Albanese’s. Dreyfus, when Attorney-General 10 years ago had no appetite for such a law and insisted that there was no case for one. Albanese, a confirmed pessimist steeped in the scandals (at state and Commonwealth level) of NSW Labor, and in any event given to considering politics in transactional terms, could see how the long-term dangers could swamp any short-term gain. The impetus arose from critics of the complacency of the public administration, and of the alacrity with which public service leaders, under both administrations, embraced bad ideas and suffocated concepts of public interest.

It developed momentum from independents. Helen Haines was developing workable (and stronger models) before Labor, on purely opportunistic grounds, adopted the cause. (As did Scott Morrison). Teal candidates worked a good deal harder than Dreyfus to make cleaning up bad government a central part of the 2022 election. Albanese and Dreyfus came into office effusive about a partnership with the teals and their contribution to the defeat of the Morrison government. Then suddenly, Albanese changed his mind. He slashed the staff entitlement of independents, though not of government or the opposition in a move calculated at drawing their ire. Dreyfus may have listened politely to teals and the independents on the shape of the legislation, but ignored them, preferring to freeze them out in favour of a deal with Dutton. The crossbench are the real parents, but the offspring has been injured by the delivery.

He is coy about the negotiations with Dutton, and one can predict that he will resist FOI disclosure, a field in which Albanese and Labor are developing a reputation as bad as the Morrison regime. The coyness ought to be pure shame. No doubt he will claim that he had to get the opposition on board because otherwise an incoming coalition government, years hence, might abolish the NACC. It wouldn’t, it couldn’t if the NACC was up and running and proving effective, something he has in fact made less likely.
Another excuse might be that he wanted the NACC to be practical, rather than built on the over-pure, over-idealistic visions of people who would never have to deal with the sometimes quick and dirty choices required by modern government. Setting his sights low. Like pretending to be a human rights champion while ignoring the continuing plight of boat people, the over-incarceration of Aboriginal children and adults while overselling the Voice as a panacea for indigenous people. And treating the untested ideas of right-wing security bureaucrats with more respect than traditional concepts of justice and the rule of law. All spin and no substance.