Are there shy signs of a new era emerging as humanity faces this pandemic? Could we be moving towards a more ‘woke’ state, leaving behind something of our 2019 ‘zombie’ selves, heads cowed over smartphones?

We are at a pivot point in human history – every crisis is an opportunity for change. We are being pushed to re-vision, re-imagine, re-evaluate the way we humans are used to living and working on our planet earth. Could it be that we are ‘waking up’ to become more ‘fully alive’ to reality?

Can the Catholic Church be ‘awakened’, converted, re-energised, to take seriously its own Patron of Ecology, Francis of Assisi, who walked lightly on ‘Mother Earth’ as he tenderly referred to her, and embraced the poor? Can our leaders receive Pope Francis’ Laudato Si and model, with their people, an ‘ecological conversion’ in dioceses, parishes and homes? Can Sunday homilies be preached on this theme? Can we join the dots? More than one million young Catholics from every corner of the earth, through the Global Catholic Climate Movement, are taking the lead in ‘ecological conversion’, with Pope Francis as their hands-on patron. Many millions more on the streets and online are calling their elders to account. They are very wide awake indeed to the ecological crisis we face.

During Covid, many of us have been ‘on retreat’, or ‘in retreat’ from life as we knew it. This has been a time when we not only moved into isolation, but were confronted head-on by some of the great questions of life. For some this has led to despair; for many it has been a precious wake-up call. The world loved the story of the reporter in New Delhi who discovered one morning for the first time that the dazzling majestic Himalayas were now visible from his rooftop, a stunning backdrop in a suddenly smog-free city, literally a ‘new vision’. People are yearning for a clearer, cleaner way of being in the world. How can we settle for ‘the same old same old’ flawed economic models and lifestyles that we now know contribute to ever more intense fire seasons, species extinction, global poverty and choking smog? It is conversion, renewal and reform time for humans!

What can we do, as people, as governments, as faith-based communities, to seize this moment?

This is a spiritual moment as much as a scientific one. Pope Francis appeals to all of humanity in Laudato Si, ‘Let ours be a time remembered for a new reverence for life, the firm resolve to achieve sustainability, the quickening of the struggle for justice and peace, and the joyful celebration of life’ (202).

Humanity needs such leadership – we Aussies have seen some glimpses of authentic leadership during the 2020 crises; ego and self-interest have been outwitted and outshone by fact-facing, cooperation, altruism and heroic self-sacrifice.

We need altruism and self-sacrifice to step up and become the new norms because ecologically we are facing an even greater global catastrophe than this virus. We need now not just a personal but a collective consciousness to change our way of being in relationship with the earth. This conviction is rising and rising, especially among the young. We adults cannot go back to ‘business as usual’, comforting as that thought may be. We need to open our hearts and minds to the God of Life and Love and humbly ask, ‘Creator God, what would you have us do now?’ We need to confess that we have exploited this earth to such an extent that nature has come back to bite us. We can ask for the wisdom of both St Francis and of sound science to know how to work with, rather than against, Mother Earth.

In Australia, I believe we urgently need to call together spiritual/religious leaders with our First Nations people, into a dialogue with scientists, humanists, business leaders, scholars and government representatives to discern a better future and articulate an ecological vision for this country. Shortsightedly, our government rejected ‘From the Heart’, the visionary statement of our First Nations people. Government needs to reconsider – this time, with humility, to learn from and with our First Nations people. The Book of Proverbs warns, ‘Without a vision the people perish.’ Australia needs an ecological vision that can underpin and energise public policy and practice. Young people need to be at the table to share their youthful outrage and their hopes. We need an opportunity to explore together how to ‘Live more simply, so that all may simply live’, to reduce our impact on land, water and air, the basic sustainers of all life, to learn from those countries and organisations that are way ahead of us in ecological/sustainability policy and practice. Such collaborative re-visioning could be done digitally, and immediately, before we rush back into our old ways after 2020.

At the personal level, many Australians are responding by choosing a more ‘minimalist’ lifestyle. This needs to be extended to a desire for the ‘common good’, becoming a way of life in our country, rather than a minority trend! We are a very wasteful society; our economy cannot be allowed to rest on economic profligacy and cavalier attitudes to Mother Earth’s gifts. During this present crisis we need to prepare ourselves to be open to learn new ways – to share earth’s gifts justly, to collaborate across state and national borders, to be willing to accept moderate salaries so that more can be employed, ready to ‘give back’ out of extreme wealth, open to the best holistic science and food production to feed the world sustainably. We need to be open to learn how to farm, mine, care for the land, manufacture, eat, heat and cool our buildings, and travel, in ways that are far more respectful of the earth’s ecological systems. Committed scientists and environmentalists are helping to model new ways of living and doing business, but they lack the endorsement of enlightened government policy. The ABC program Fight for Planet A should be compulsory viewing for every politician and community/religious leader. Three cheers for artists, scientists and spiritual teachers who can creatively engage our minds and emotions to face up to this super serious issue, showing how it can be done, and paving the way for a collective will to change!

It will take an ‘ecological conversion’ on a grand scale … a change of heart for individuals, families, organisations and governments. Such change rests on reflection and ecological spirituality, influencing centres of worship, homes, board rooms and parliaments. We will need to consciously stop, reflect, take stock, and carefully consider impacts, before we rush to decision and outcomes, acting with the love and care of ‘Mother Earth’, our Common Home, always front of mind.

Humans now know that our devastation of the earth for profit and ‘progress’ is plain wrong, so we need to humbly beg the earth’s forgiveness and invoke the Spirit of all Life, the Holy Spirit in Christian terminology, to empower us to not only see what is happening, but to have the courage to change, to walk lightly on the earth, with joy, peace and admiration rather than stressfully, selfishly seeking to extract more and more. This is the liberating vision Jesus had of the Kingdom of God ‘on earth’ as well as ‘in heaven’. Let us, as Jesus invited, ‘See the lilies of the field’, really see, and know that God makes the sun shine and the rain fall equally on all. With eyes opened and hearts burning, we can and must usher in what Thomas Berry called the new ‘ecological age’, and St Paul refers to as ‘the New Creation’. The Catholic Church must step up and take prophetic leadership, responding to Pope Francis’ warm invitation to all earth’s citizens to be ‘loving custodians of the earth’. Let’s do it for Planet A, knowing there is no Planet B! 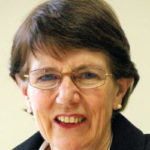 Dr Trish Hindmarsh is an educator and associate of Catholic Earthcare Australia. She lives in Tasmania and is actively involved in Concerned Catholics Tasmania (CCT) and Women and the Australian Church (WATAC). She is the author of 'Care for our Common Home: An Australian Group Reading Guide to Pope Francis' Laudato Si' (2015).