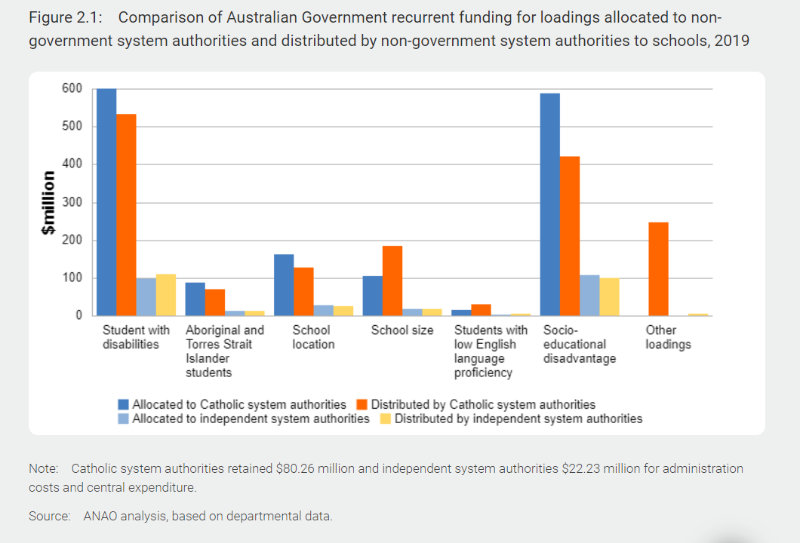 Yet another damning report by the Auditor-General shows that the Commonwealth Department of Education continues to fail to fully hold private school systems accountable for how they distribute taxpayer funding. It also criticises the Minister for Education and the Department for failing to meet their parliamentary reporting obligations.

The department’s administration of legislated requirements to gain assurance that funding has been allocated, used and distributed in accordance with the requirements is partially effective….

The department does not yet effectively support the transparency of Australian Government funding allocations as prescribed in the Act. [p. 10]

In other words, the Department is breaking the law as it has done since 2013 when the Education Act was implemented.

The main failure is that the Department evades its obligation to ensure that taxpayer funding is distributed in accordance with need by private school systems.

The department does not analyse school funding allocation data to gain assurance that funding is distributed in accordance with need. [p. 11]

As the report says, a key objective of the Education Act is the distribution of taxpayer funds according to need. Analysis of distribution by system authorities would provide assurance that funding is distributed in accordance with need. Yet, the Department has constantly failed to ensure this since 2013.

The Auditor-General’s previous report and a bi-partisan report by the Joint Committee of Public Accounts of the Parliament in 2019 highlighted this failure and recommended the Department strengthen its analysis of the distribution of funding by private school systems. However, the new report found that the Department has not conducted any work since February 2018 to compare how the funding allocated by the Government for individual schools and provided to system authorities compared with the amounts distributed by authorities to those schools.

This is a public scandal and amounts to contempt of the Parliament. The Department, presumably at the behest of successive Coalition Ministers, has willfully ignored the requirements of the Education Act and recommendations of both the Auditor-General and the Joint Committee of Public Accounts. This blatant disregard of the law should be a sackable offence for the Minister and senior officials of the Department.

The Auditor-General also found that the Department is not meeting legislative reporting requirements to the Parliament.

….the department does not ensure that the legislative requirement to report publicly on the application of any financial assistance paid to an approved authority is met. [p. 10]

The Department claims that its annual report and information provided on the My School website provides sufficient information to meet the requirements of the Education Act. The Auditor-General rejected this argument. The information in the Department’s annual report only presents the total amount of recurrent funding paid to public and private schools and does not provide a breakdown of funding by system authority or school.

The Auditor-General’s report said an annual report should be presented to Parliament that outlines the funding provided to a school authority and how this funding has been applied by the authority in order to meet the requirements of the Education Act. It noted that prior to 2013, the Department produced the annual Report on Financial Assistance to Schools (known as the Green Report) which provided a detailed breakdown of school-level funding and enabled a comparison between schools, authorities, school sectors and jurisdictions. However, this was discontinued under the Abbott Government.

The previous report of the Auditor-General found weaknesses in the Department’s mechanisms for monitoring the compliance of private schools in meeting basic requirements on how funding is to be used. The new report found that Issues relating to the sampling approach used to verify the financial questionnaire and the qualification requirements of the person submitting the block allocation report by schools have not been resolved. These ongoing problems “reduce the level of assurance that funding is used in accordance with legislation” [p. 10].

The latest report does note some progress in ensuring that school systems make their needs-based funding arrangements publicly available. The Department has published a list of private school systems and links to their website where their needs-based arrangement is published. However, an inspection by Save Our Schools revealed that the links provided are only to the school system website and not to the relevant webpage. Some searching is required to find the arrangements. Although there is considerable variation in the detail provided, information is generally available except in the case of a few small systems.

Another improvement is that the Department now has reasonably effective mechanisms now in place to ensure accuracy in funding allocation. The department conducts a census post-enumeration exercise to gain assurance on non-government schools census data. The purpose of the post enumeration exercise is to verify the accuracy and completeness of census information provided by schools by surveying a sample of schools shortly after a census is complete. These mechanisms found a net over-payment to private schools of $20 million in 2019, down from $31 million in 2018.

The previous Auditor-General’s report found that weaknesses in funding monitoring arrangements had undermined the Department’s ability to verify school data and assure that funding was used as prescribed under legislation. It recommended that the Department establish a risk-based approach to monitoring compliance with requirements under the Act. The new report found that the Department has developed a robust risk-based approach to monitoring compliance but that its implementation is in the early stages.

Despite these recent improvements, the Education Department and a succession of Ministers for Education have a woeful record of adhering to the legislative financial accountability and transparency requirements relating to the funding of private schools. Eight years after the implementation of the Education Act, the public is still not assured that private school systems distribute taxpayer funding according to need. Moreover, the Department continues not to fully report to the Parliament on funding provided to schools.