Environment: An asset for profit or a space for children to thrive? 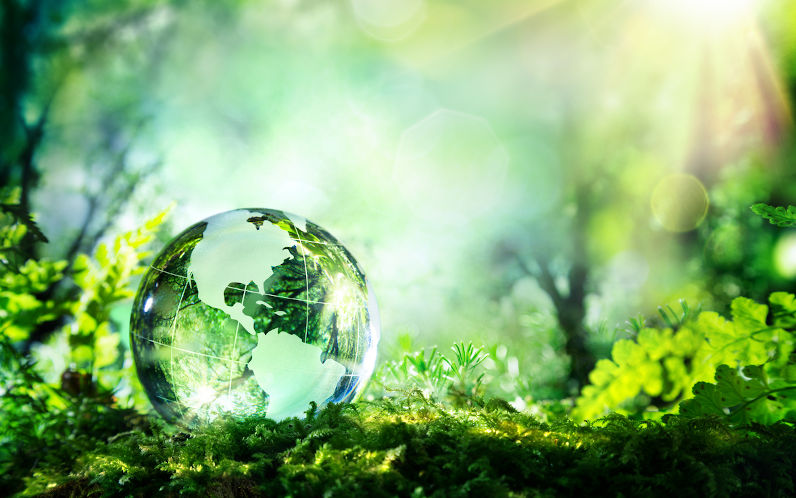 Is the natural environment to be commodified for profit or cherished to help children and adults thrive? How to decarbonise Australia’s transport systems.

In its 2011 White Paper ‘The Natural Choice: securing the value of nature’, the UK government stated that its ambition was for ‘a green and growing economy which not only uses natural capital in a responsible and fair way but contributes to improving it. It will properly value the stocks and flows of natural capital. Growth will be green because it is intrinsically linked to the health of the country’s natural resources. The economy will capture the value of nature’ (underlining added by me). Natural capital was defined as ‘the stock of our physical natural assets (such as soil, forests, water and biodiversity) which provide flows of services that benefit people (such as pollinating crops, natural hazard protection, climate regulation or the mental health benefits of a walk in the park).’

As recommended in the White Paper, an independent National Capital Committee was established to advise the government on how to achieve its ambition and ‘put the value of England’s natural capital at the heart of our economic thinking’. In his introduction to the Committee’s second report in 2014, the chairman stated that ‘it is important not to lose sight of natural infrastructure and the integral part that natural capital plays in delivering sustainable economic growth. As the White Paper rightly emphasised, the environment is part of the economy and needs to be properly integrated into it so that growth opportunities will not be missed. Integrating the environment into the economy is hampered by the almost complete absence of proper accounting for natural assets’ (again, underlining added by me).

The point of drawing your attention to these ancient documents from a foreign land is to highlight three issues arising from the approach they advocate:

There’s an argument that we won’t value (in the sense of cherish) the natural environment until we can measure its value to humanity in the economic sense and thus allow it to be traded like any other asset. Only when individuals, governments and companies can profit from preserving the environment, so the argument goes, will we see real progress towards environmental sustainability. I certainly agree that aspects of the natural world should not be treated as free gifts to anyone who wants to take them or foul them for profit but it’s not obvious to me that treating the environment as a tradable commodity is likely to keep global warming in check or preserve biodiversity.

‘Places and Spaces. Environments and children’s well-being’ is a report from UNICEF which examines how well the world’s 39 richest countries are providing a healthy environment in which children can live, develop and thrive. The analysis examines three factors within each of three levels of influence around the child: 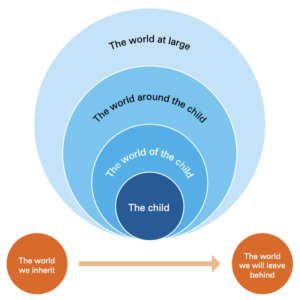 Overall, Australia ranked 30th of the 39 nations: 10th for the world of the child, 20th for the world around the child and 37th for the world at large. For reference, Spain came top of the class, UK 11th, NZ 15th and the USA 37th. In fairness, although Australia’s rankings weren’t great for the worlds ‘of’ and ‘around the child’, on the measures used to assess each of the six factors Australia generally performed pretty well – it’s just that other countries did a bit better. In the world at large category, however, Australia is definitely in the naughty corner, being ranked in the bottom five countries on all three factors. If everyone lived like Australians, we’d need 4.6 Earths to supply the resources required (almost double Spain and the UK, both of which are, of course, way above sustainable levels). On average, each Australian generates 14.8 tonnes of CO2 per year; the average for all 39 countries is 9 tonnes. Only Colombia and Costa Rica are below the level that can be sustained globally, around 3 tonnes per person per year. 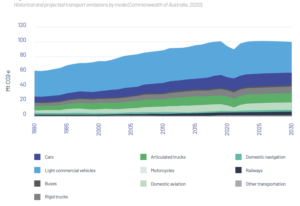 To advocate for and boost cooperative action across all levels of government and industry in support of decarbonising the transport sector, a group of academics has produced FACTS, a Framework for an Australian Clean Transport Strategy. The framework contains about 25 decarbonisation targets across eleven modes of transport (light vehicles, buses, railways, shipping, domestic and international aviation, etc.) and about 50 policy suggestions for local, state and federal governments, so I’ll limit my summary to the two proposed overarching decarbonisation targets:

… and the three-part framework proposed for decarbonisation strategies and technologies:

The quick wins come from the adoption of rapidly maturing technologies for the electrification (with sales targets where appropriate) of cars, light commercial vehicles, trams, urban buses and trucks, and trains. Decarbonisation of international shipping and aviation are longer term goals that require more technology investment and development.

There’s no question that FACTS is carefully researched and contains a wealth of ideas for governments and the transport industries. The authors want individual citizens to bring it to the attention of their representatives in local, state and federal government and let them know that they support greater action to decarbonise Australia’s transport systems.

Regarding air travel, according to Qantas’s chief sustainability officer, synthetic hydrocarbon fuel, produced by drawing hydrogen from the air and oxygen from water using renewable energy, could start replacing petroleum and plant-based biofuels on long haul flights by the mid-2030s. Hydrogen and battery powered planes, on the other hand, are only likely to be suitable for short flights. (Search with ‘Qantas says synthetic fuel could power long flights by mid-2030s’ for a Financial Times article about this.)

Returning to healthy environments for children, isn’t it just a little shocking that sewage is still being discharged into Double Bay, a popular harbour-side bay and beach in Sydney where children paddle and play? Shouldn’t we expect better in one of the most affluent cities in one of the most affluent countries in the world in 2022? (I took the photo below on 29 May 2022.) 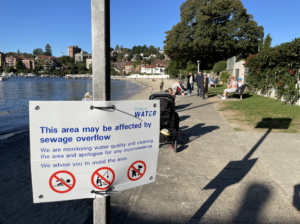