Environment: Can astronomical phenomena inspire us to solve earthly problems? 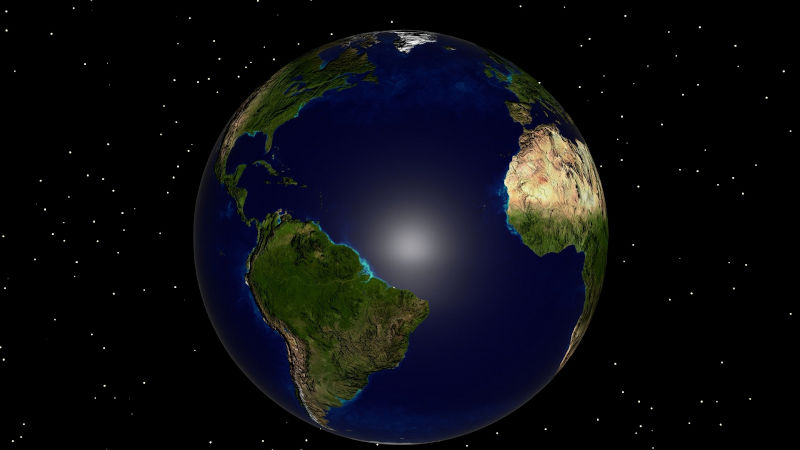 Forget war, climate change, famine and dysfunctional economics for five minutes, lift your eyes to the pre-dawn skies and see five of our planetary neighbours.

Creating an Environment of Peace

Recent years have seen an increase in the number of intra- and inter-national conflicts and the number of people dead and displaced as a result, an increase in spending on arms and military forces, and more threats about the use of nuclear weapons. Environmentally, we are experiencing more frequent and more severe extreme weather events, rising seas, shortages of fresh water, deforestation, loss of biodiversity and an increase in new infectious diseases caused by viruses passing from animals to humans. ‘Environment of Peace’, a report by the Stockholm International Peace Research Institute, draws attention not only to the ‘deepening twin crises in security and the environment’ but also to a third, more complex set of risks that arise from the interaction of the two crises. In particular, the report highlights the poor level of awareness and slow responses of governments to these crises; that governments are spending money that fosters insecurity rather than tackles it, for instance by paying subsidies to fossil fuel companies; and that countries with the highest levels of ecological threat are those where peace is most tenuous.

The Stockholm Institute identifies six recommendations and five guiding principles for tackling the twin crises and establishing a lasting ‘Environment of Peace’. The principles are:

Their six recommendations are:

While organisations at all levels (e.g. the UN, national governments, the private sector, civil society) have crucial parts to play, the report stresses the central and unique role of governments as legislators and allocators of resources (and, I’d add, mood setters). I’ll leave the final word to the report’s authors: ‘Without restoring the health of the natural environment and halting climate change, environmental degradation will just keep stoking the fires of insecurity and conflict.’

See five planets at once 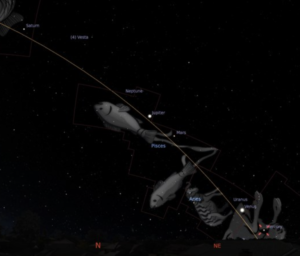 My weekly contributions usually focus on our Earthly environment but I must draw your attention to a bigger picture. During June there’s a great opportunity to see five planets in the pre-dawn sky – well, six if you include our own. Looking towards the north-east and north at about 5.15-6.15am (east coast time) on clear mornings recently I’ve been lucky enough to identify our closest neighbours in the solar system, Mercury, Venus, Mars, Jupiter and Saturn in (a slightly arcing) alignment above the horizon (see the diagram above). It’s remarkable enough to be able to see them all at once like this but even more remarkable that they are in the same order as their distance from the sun, Mercury being 56 million kilometres from the sun and Saturn 1.4 billion. It’s taken light about two and a half hours to go from the sun to Saturn and back to my retina. But this is just the final lap of the light particle’s very long journey as it may have taken thousands or even millions of years to get out of the sun in the first place.

The (almost) real-life picture above from Museums Victoria shows the view in Australia. The one below is stylised and from the northern hemisphere (and so the line of the planets is reversed, so to speak, running to the south-east rather than the north-east) but it provides a clearer idea of what to look for. 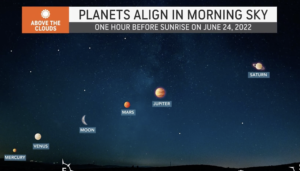 The movement of the planets and the speed of light obey the laws of physics … just like the science of climate change. As indeed, one might argue, do humans’ cerebral processes. But unlike celestial bodies and photons, as a result of the remarkable property of emergence that occurs in complex systems, humans can use the laws of physics to exercise choice and change the course of events. Regrettably and dangerously, we aren’t making many good choices in relation to climate change at present.

The story in numbers: 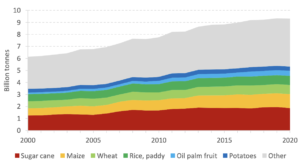 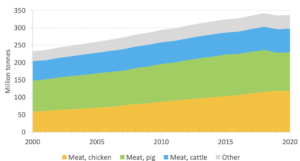 The take home message: global production of crops and meat has stagnated; the number of people suffering a high level of food insecurity has been increasing and looks like getting worse – currently, this is mostly due to problems related to distribution and price rather than scarcity; climate change is reducing crop yields and nutrient content.

What do we see 50 years after the publication of ‘Limits to Growth’, 30 years after the Rio Earth Summit, 27 years since the first UN climate change COP meeting and 7 years after the adoption of the Sustainable Development Goals and the signing of the Paris Agreement? Global GDP continues to grow, extractivism continues to dominate economies, greenhouse gases emissions continue to increase, global temperatures continue to rise, extreme weather events are becoming more frequent and more severe, the extinction of species continues to accelerate, and inequality, poverty and hunger remain. Have we learnt anything?

According to Jeffery Sachs: ‘we now understand the difference between mere “economic growth” and real economic progress. Economic growth focuses on raising traditional measures of national income, and is merely doing more of what we are already doing: more pollution, more greenhouse gas emissions, more destruction of the forests. True economic progress aims to raise the wellbeing of humanity, by ending poverty, achieving a fairer and more just economy, ensuring the quality education for all children, preventing new disease outbreaks, and increasing living standards through sustainable technologies and business practices. True economic progress aims to transform our societies and technologies to raise human wellbeing’.

Sachs wants to regenerate economics to ‘become a new and more holistic academic discipline of sustainable development’. One that recognises that the market economy is embedded within an ethical framework and where politics aims for the common good. This means starting with peace and cooperation and finding common purpose between the West and East.

Ten countries are forecast to have over 3 million people in food Crisis or worse in 2022. The most afflicted countries are in a crescent extending from West Africa through Central and East Africa and Yemen to Pakistan and Afghanistan. A history of European colonisation also seems to be a pretty common factor. 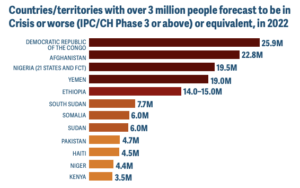 PS. Don’t forget to go looking for the planets.