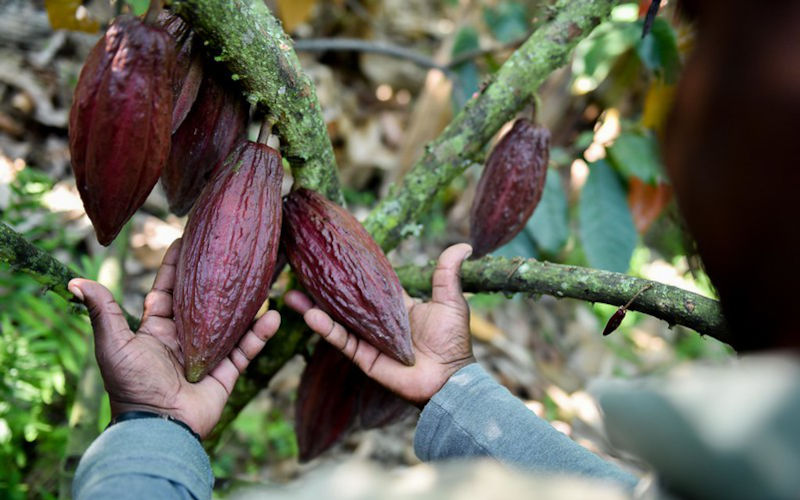 There’s been much talk in the last fortnight about the most recent IPCC Working Group III report on mitigation of climate change. I’ll have some comments about that next week.

However, a significant but generally unnoticed aspect of last year’s Working Group II report on impacts, adaptation and vulnerability has recently come to my attention. For the first time ever, an IPCC report refers to colonialism as a cause of climate change and, equally significantly, an ongoing issue.

Section B.2 of the Summary for Policymakers, “Vulnerability and Exposure of Ecosystems and People”, contains the following:

“Vulnerability of ecosystems and people to climate change differs substantially among and within regions, driven by patterns of intersecting socio-economic development, unsustainable ocean and land use, inequity, marginalization, historical and ongoing patterns of inequity such as colonialism, and governance.”

Shortly afterwards (section B.2.4), the reference to colonialism is expanded:

Recognition of the role of colonialism has not occurred easily or quickly. It is the outcome of many years of advocacy by the climate justice movement, particularly Indigenous groups. Now, however, the scientists advising the IPCC have accepted the evidence that colonialism is a past and continuing cause of climate change through extractivism, deforestation and pollution. This in itself is not surprising, particularly as many more social scientists, coloured scientists, Indigenous scientists and female scientists are now involved in compiling IPCC reports. What is somewhat surprising is that mention of colonialism in the Summary for Policymakers, which must be endorsed by all member nations, was not vetoed by some nations’ diplomats.

“With this additional language finally being incorporated into the IPCC reports, I hope that we are more equipped to hold colonial states and governments accountable to not perpetuating colonialism as we respond, adapt, and mitigate the climate crisis,” said Jade Begay, a climate justice campaigner.

Place the following seven products in order of importance as causes of deforestation globally between 2001 and 2015:

See the answer in the final item below.

Food emissions can be reduced

Feeding the world (farm and fishery to face and landfill) produces a quarter to a third of all greenhouse gas emissions. To keep global warming manageable, this will have to decrease in the coming decades, all while the population grows and the developing world develops a taste for a more western diet. Beef production not only destroys forests, it is also one of the most resource intensive industries (for land, water and the production of greenhouse gases) and most prescriptions for net zero emissions include a reduction of beef consumption and in increase in plant foods in developed countries.

Food producers, manufacturers and retailers have many options to reduce emissions and change human diets by changing the supply side of the beef industry. For instance:

Beef producers can reduce emissions through:

Food manufacturers, retailers and service providers can reduce emissions through:

With the exception of the last strategy, these all contribute to reducing beef-related emissions without directly involving the consumer. Changing consumer behaviour can be difficult but it does happen: think eating habits over the last 50 years and mobile phones over the last twenty. And, as we know, a more plant based diet is healthier.

In “Putin’s botched war could destroy the global economy” in The New York Times (reproduced in the Sydney Morning Herald on 8 April 2022), Paul Krugman concludes “To make the world durably richer, we need to make it safer”. OK but it’s a bit more complicated than that.

If you’ll indulge me, Paul, moving upstream and forsaking the imperative for yet more riches:
“To make it safer, we must make it fairer” and …
“To make if fairer, we must make it more democratic”.
And so, Paul, I wish you’d finished your article more along these lines:

“To make an environmentally sustainable and peaceful world where all humanity can thrive, we must make it more democratic, fairer and safer”.

Thanks for giving me the opportunity to improve the work of a Nobel Prize laureate though. You have my number if I can be of any future help.

Although I accept that there are serious questions to be answered about the optimal size of the global population, I don’t cover the issue very often in P&I. This is for two principal reasons. First, the major and most pressing problems that we face – environmental problems (e.g. climate change and loss of biodiversity) and social problems (e.g. inequality, oppression and a failure of national and global governance systems) – cannot be managed by reducing the size of the human population. There simply isn’t enough time to reduce the global population to, say, 5 billion people to avoid the social catastrophes that will inevitably follow the imminent environmental catastrophes. We have to manage (we can’t ‘solve’) the urgent crises we’ve face with the 8 or 9 billion people that will inhabit planet Earth for the next fifty years. Second, over the next few decades the global population will increase by around 25 per cent but the average consumption per person will increase 2-3 fold. The increase in consumption, which is potentially amenable to modification in the short to medium term, is an order of magnitude greater than the much more difficult to reduce population.

But Jennifer Sciubba makes the important point that the 21st century is “less a story about exponential population growth than it is a story about differential growth – marked by a stark divide between the world’s richest and poorest countries”. In the Americas, eastern Asia, Europe, Australia and New Zealand the average number of children each woman is likely to have is below the population replacement rate of 2.1 per woman, so populations will both age and decline. In sub-Saharan Africa the reproduction rate is 4.7 children per woman and the population will increase six-fold this century. By 2050, Ethiopia and the Democratic Republic of the Congo will be among the ten most populous countries, with almost 300 million and almost 400 million inhabitants respectively. In 1960, they had 30 million people between them – about Australia and New Zealand’s combined current population.

The problems for the currently poor but increasingly populous countries are often exacerbated by poor governance, civil wars, military aggression from the outside (Yemen, for example), economic exploitation by the West, and environmental destruction (I highlighted deforestation in the Congo recently).

In the richer, ageing countries there will be a shortage of workers to maintain social systems and productivity. Sciubba’s options to soften the economic strains in these countries are ‘interesting’, to say the least: raise retirement ages, cut benefits, push more people into employment and increase immigration. More immigration is not an option that the USA, Europe and Australia have been that keen on lately – well, not unless the immigrants look like us, of course. I’d be happier if Sciubba had taken an approach more similar to my reimagining of Paul Krugman’s work.

Cattle account for nearly half of all agriculture-linked deforestation

The figure below provides the answer to the quiz. 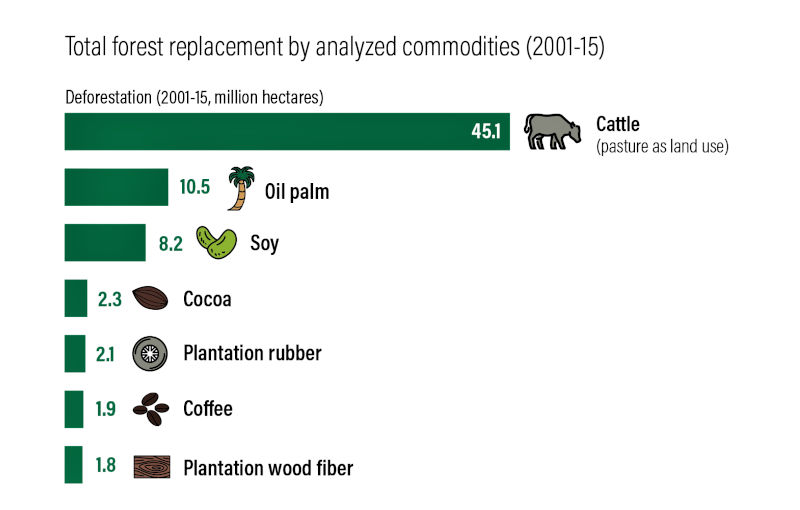 During 2001-2015, these seven products were responsible for 58 per cent of the 123 million hectares (123 Mha is about half of WA) of deforestation linked to global agriculture. Land for the feeding and farming of cattle was by far the major factor, responsible for 37 per cent of the total, with South America leading the herd. Deforestation to make way for cocoa and coffee looks pretty small but is on the increase. Happy Easter.