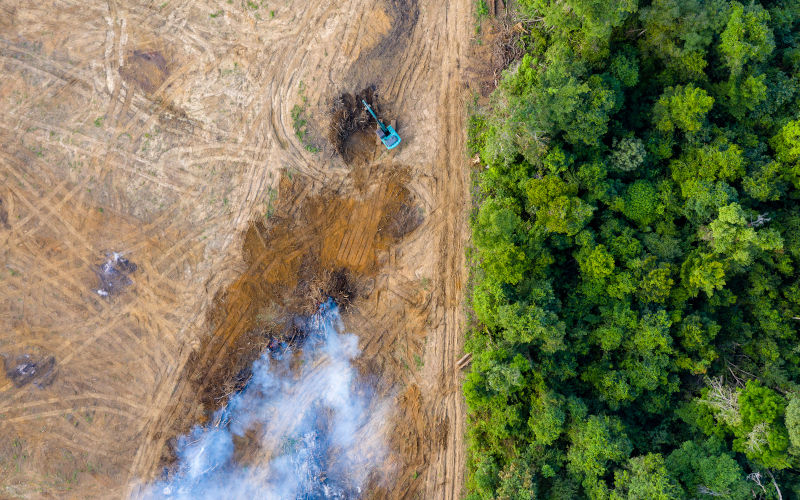 20 million hectares of tropical and boreal forests were lost in 2021. Climate change is destroying the soil crust in arid lands. Peatlands are disappearing globally. It doesn’t have to be this way: action is possible.

In 2021, the tropics lost 11 million hectares of tree cover (about half of Victoria). Most significantly, 3.75 MHa of the loss was in primary forests, 85 per cent of which resulted directly from human activity and 15 per cent from fires. The loss of this primary forest generated 2.5 Gigatonnes of CO2 (about five times Australia’s annual CO2 emissions). The annual loss of primary forest has increased by about a third compared with the beginning of the century.

As can be seen in the bar chart below, the biggest loss by far occurred in Brazil, which, as I’ve reported before, more than halved its annual losses between 2004 and 2015 but has gone backwards since then. While Bolivia’s rate of deforestation is less, it has quadrupled over the last twenty years. 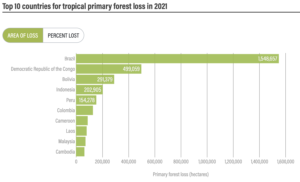 The big recent success story for reducing loss of primary forest is Indonesia, as the figure below demonstrates. 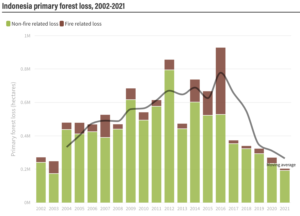 Russia has been clearing its boreal forests at a rate of about 1 MHa per year throughout this century but annual losses to fire have been 2-5 times greater and increasing. In 2021 Russian tree loss covered a total of 6.5 MHa. In the northern, evergreen, boreal forests generally, it is fires related to climate change that are the major threat. Indeed in 2021, boreal tree cover loss was over 8 MHa – approaching the losses in tropical forests.

If, like me, you weren’t entirely sure what a primary forest is, here’s a crib sheet. A primary forest is one that has progressed over decades or even hundreds of years through all its stages of succession to full maturity. It is largely undisturbed and has mostly continuous tree cover, unpolluted soil and water, and the full complement of its characteristic animals and plants, with few exotic species. About a third of the world’s forests are primary and while they occur across the world, 75 per cent are in seven countries. They are important for climate change mitigation and biodiversity, and provide livelihoods for Indigenous communities for whom they are important culturally and spiritually. About 35 per cent of primary forest has been lost over the last 12,000 years. There’ll be a quiz later.

Indonesia and previously Brazil have shown that deforestation can be reduced but there’s a lot of work to be done if the global 2030 zero-deforestation target is to be met.

The biggest reason for tropical deforestation, some of it legal, some not, is for beef and crop production but some is small-scale clearing by local people trying to eke out an existence. Climate change is also playing an increasing role through increased exposure to droughts, fires, storms and pests. The rapidly increasing scientific knowledge about the value of conserving forests and the role forests play in regulating the global climate system and protecting biodiversity adds to the pressure to protect forests. Some governments, philanthropists, financial institutions and agricultural companies are making promises and allocating money to forest protection, but what’s the best thing to do?

At last year’s COP meeting in Glasgow, 141 heads of state signed a Leaders Declaration to halt and reverse forest loss by 2030. Four practical ways to move this forward are:

Before we leave tropical forests, African forest elephants live in the dense rainforests of West and Central Africa. They are smaller and more solitary than their savannah cousins. Their industry and huge appetite for food sees them trampling on plants and small trees, stripping bark off saplings and digging up roots, which sounds very destructive. And so it is but in a creative way that tends to stabilise the environment, in fact they are known as ecosystem engineers. For instance, eating or squashing some small trees allows others to gain better access to nutrients, water and light and encourages them to grow larger and taller. Bigger trees promote biodiversity and store more carbon each year. This has a benefit for reducing global warming, provides local environmental benefits and could generate much-needed income. Unfortunately the previous population of 1.1 million forest elephants has been reduced to less than a tenth of that by deforestation and poaching.

… a rephrasing that will be lost on anyone younger than 40 but useful nonetheless to emphasise that in arid areas the surface (crust) of the soil may look the same everywhere to the untrained eye but nothing could be further than the truth. In their natural state in arid lands, biocrusts (or cryptobiotic soils) consist of a complex mix of algae, fungi, lichens, mosses, bacteria, sticky organic chemicals and inorganic matter. These elements form intricate but fragile organic structures that stabilise the soil, slow erosion, suck CO2 out of the atmosphere and fix nitrogen from the atmosphere. When the crust is damaged, for instance by hard-hooved livestock, hard-shooed humans, roads, fossil fuel extraction or urbanisation, the crust crumbles and allows the underlying soil to dry out and blow away. The dust can settle on snowfields and speed up evaporation of the snow, leading to less spring melt, reduced river flow, desertification and water shortages for downstream communities. When humans are exposed to the dust it can exacerbate respiratory and heart diseases and cause infections from microbes in the soil. Dramatic dust storms are another manifestation. The loss of nitrogen fixing bacteria and lichens reduces the ability of plants to thrive in the underlying soil and this reduces the food and shelter for local animals. The outcome of damaging the cryptobiotic crust is that the whole ecology of the area is rendered less diverse and less resilient.

Lichen are communities of symbiotic fungi and algae. Evidence is now emerging that the lichen in the crusts, particularly the nitrogen fixing ones, are facing an additional threat from climate change. For instance, in test plots in the Canyonlands National Park in Utah, the proportion of nitrogen fixing lichen in the biocrust fell from 19 per cent in 1996 to 5 per cent in 2019. During this time the losses have been greatest during droughts and hotter than average seasons.

Although this research was conducted in the USA, its implications are global. Arid lands occupy over 10 per cent of the world’s land and there are concerns that global warming could contribute to a loss of 40 per cent over the next 50 years. Australia has its own vast arid areas and cryptobiotic soils. Although much of the crust has already been damaged by grazing, it has been shown to begin to recover quickly once livestock are removed.

Peatlands cover 3 per cent of the world’s land but store twice as much carbon as all our forests. Peat’s secret is its phenomenal ability to hold water and prevent organic matter from decaying and releasing its carbon. Humans have drained 15 per cent of the world’s peatlands and as they dry out they release their carbon into the atmosphere. The destruction is ongoing but it doesn’t have to be. We can even restore damaged peatlands by blocking the drainage channels and letting them become waterlogged again. For a fuller story, have a look at this picture-book article. 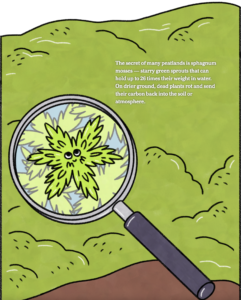