Environment: How to feed 10 billion and predict the next Covid 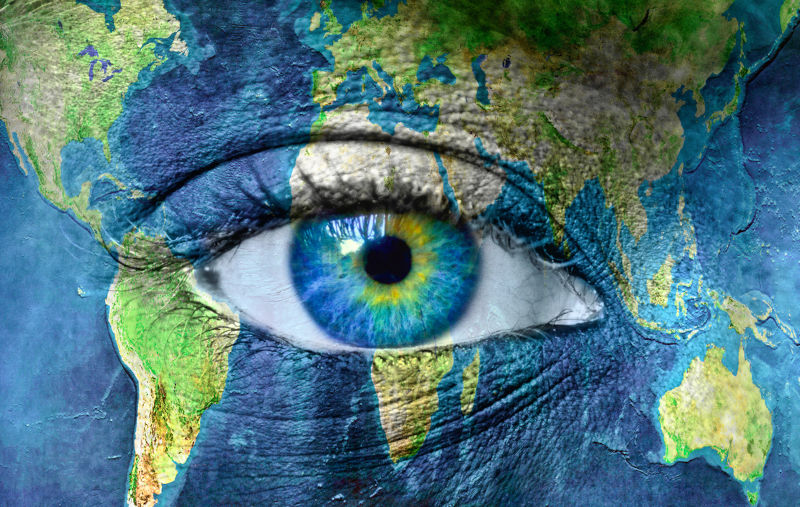 The global population is now 8 billion but the vast majority make little contribution to global warming. The search is on for ways to feed 10 billion sustainably in 2050. 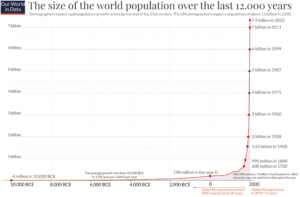 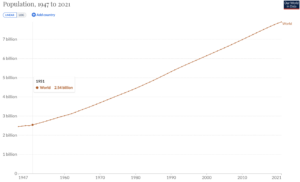 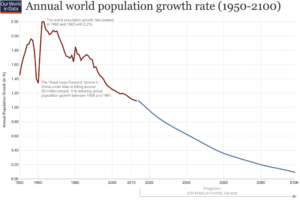 Regular readers will know that I don’t enter into the argument that asserts that the fundamental cause of climate change is that the global population is too big. Population size is undoubtedly an issue in many ways but consumption per person is a much more important cause of global warming.

On top of which, the countries with the biggest populations tend to have the smallest environmental footprints per person. The bar chart below shows CO2 emissions per person per year.

China (the most populous), the USA (3rd most) and the countries shown in the bottom six bars constitute the world’s eight most populous nations – even without the USA, they contain almost half of the world’s population. The six large countries at the bottom of the chart all have low emissions per person. China has been increasing its emissions per person in recent years and now sits in the middle. 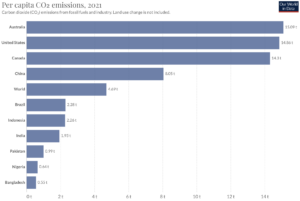 Crucially, however, there’s nothing at all we can do to reduce the size of the world’s population in a time frame that is at all relevant for getting global warming under control.

Well, I suppose we could have a nuclear war – that would be fun. In fact, the Scylla and Charybdis for 21st century humanity are hothouse Earth and nuclear winter.

2050: more food on no more land with fewer emissions

Sustainably feeding 3 billion more people in 2050 than we fed in 2010, remembering that as poor countries develop they are likely to want and be able to afford a more resource-intensive western diet, presents three major challenges:

The World Resources Institute thinks it has come up with the answer – well, 22 answers actually, neatly packaged into a five-course menu (their term, not mine):

Interestingly, at least half of agriculture’s emissions reductions can occur beyond the farm gate, particularly from shifting diets, reducing food loss and waste, stopping population growth and restoring peatlands. The big opportunities on the farm are from increasing crop yields, reducing enteric fermentation by ruminants and reducing fossil fuel use.

The WRI is confident that its 22 recommendations can deliver co-benefits for farmers, society and human health, but it will need all 22, not just the easy ones.

If you missed it, the open letter from fifty food and justice organisations to Bill Gates that was published in Friday’s P&I is well worth reading. The letter briefly describes some of the practical solutions being developed by African farmers ‘on the ground’ to improve food supply and critiques the high-tech solutions being promoted by Gates and BigAg.

Over the last three years many of us have become familiar with the concept of spillover – the transfer to humans from wild, farmed and domestic animals of microorganisms that have not historically infected humans. There have been previous examples of new epidemics and pandemics caused by such organisms – for instance, HIV, SARS, MERS, Zika and Ebola – but Covid has brought this issue to the fore.

Less well known is spillback (or reverse zoonosis) – the transfer of microorganisms from humans to nonhuman animals. This involves risks to the health of not just the animals but also humans. When an organism spills from humans to an animal species, whether it be domesticated, farmed or wild, there is the possibility that the organism will spread into other animal species, mutate and spillover again in its new form to humans. There is an argument that this is how the Omicron Covid variant emerged.

The story of spillback is graphically told with a focus on mink farms in the New York Times. Mink farming, for the pelts of course, is a US$20 billion a year industry, principally located in the USA, China and Europe. (Who is wearing all the mink coats that are presumably produced? You hardly ever see one these days, thank goodness.)  If the farms visited by the author in the USA are in any way typical, the life of a mink is solitary, poor, nasty, brutish and short, and the dreadful conditions are ideal for the transmission of diseases among the mink themselves and also to humans and nearby wild and domestic animals.

That all said, a 2021 review of 97 published examples concluded that ‘spillback represents an apparently minor threat to conservation and public health, particularly relative to other anthropogenic stressors like land use and climate change’.

Fruit bats provide a natural reservoir for Hendra virus without causing any problems. In recent years, however, Hendra has on occasions caused small outbreaks of respiratory disease in Queensland and NSW by spilling over into horses and humans, often with fatal consequences. The circumstances that lead to the spillover of the virus have recently been identified and the researchers claim that they can predict a spillover up to two years ahead.

A combination of events is needed to increase the chances of a Hendra spillover. To simplify the story greatly, when a strong El Nińo causes a drought, fruit bats become food stressed. In response, during the winter months, rather than roaming widely, the bats settle in urban and agricultural areas where their Hendra-laden urine, faeces and partially chewed food drops to the ground. Horses pick up the virus, get infected and pass it on to humans. The situation is made worse by the loss through land clearing of the bats’ winter habitat, particularly the loss of winter flowering eucalypts. However, should there be a major flowering event somewhere during the winter following the drought, the fruit bats migrate on mass to the food source. By leaving areas populated by people and horses, the bats avoid causing a spillover.

This suggests that by restoring habitats of eucalyptus species that flower in winter, the frequency of spillovers can be reduced.

Which all leads me on to …

A significant problem identified in the mink article is the inconsistent, fragmented and uncoordinated systems for monitoring human and animal health both within countries and internationally. The UN Food and Agriculture Organisation, the UN Environmental Programme, the WHO and the World Organisation for Animal Health recently released the report of a one year study of opportunities to improve the harmonisation of human and animal health information systems. The principal recommendation was the establishment of a Global One Health Intelligence System to improve early warning and risk assessment of emerging threats to global health arising from infectious diseases and environmental change. The hope being, of course, that this would lead to prompt and effective action to reduce the impact of emerging infectious diseases and other threats (for instance food insecurity) created by environmental change. It will be interesting to see if the recommendation is taken up as the public and political perception of Covid’s threat recedes and complacency returns.

‘Voice of the Sea: Where did it go, your love for me?’

Working with the Australian Marine Conservation Society, John Williamson has written and recorded a gentle lament about the damage humans have done to our oceans. It is also a rallying call for action on marine conservation. Free music packs have been provided to schools across the country so that children can learn and sing the song at concerts and assemblies. Make sure your kids’ and grandkids’ schools have got it. 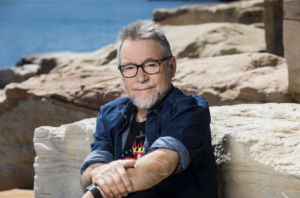 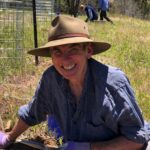