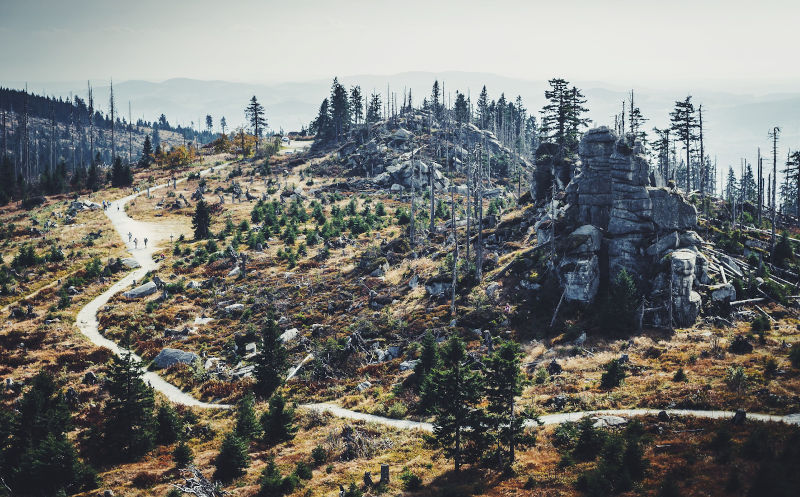 ‘Casinos launder proceeds of crime’. ‘Politicians lie’. ‘Fossil fuel executives block climate action’. ‘Native forests better than monoculture plantations’. Four completely unbelievable headlines, I’m sure you’ll agree. But have I got news for you: research shows the last one to be true.

Reforestation will form part of the action by 61 nations (but not Australia) to meet their pledge to the Bonn Challenge to restore 350 million hectares of degraded and deforested land by 2030. The aim of reforestation is to restore ecosystems, landscapes and biodiversity while also improving ecosystem services such as carbon storage, soil erosion control, water supplies and wood production. However, it hasn’t been clear whether these goals are better met by plantations or by restoring native forests which contain a diverse mix of trees, shrubs, plants, grasses, etc. It isn’t even clear how reforested areas compare with natural native forests.

A comparison of 26,000 matched pairs of natural forests, reforested native forests and plantation forests in 53 countries has demonstrated that carbon storage, water provisioning, biodiversity and particularly soil erosion control are all delivered better by natural and reforested native forests than plantation forests. Younger, monoculture plantations perform particularly poorly on these measures. Plantations do, however, deliver an advantage in wood production. That all said, there was a lot of variation in the results. The overall conclusion is clear, however: just planting millions of trees is not sufficient. They have to be the right mix of trees and other flora in the right places to generate the desired environmental benefits. Who would have believed it?

While we’re talking about forests, tropical forests cool the Earth by about 1 degree Celsius. However, only about two-thirds of the total cooling effect of tropical forests is attributable to their well-known ability to suck CO2 from the air, store it long term in their trunks, branches and roots and so stop it increasing the greenhouse effect. The cooling effect’s other third comes from the ‘biophysical effects’ of trees – that is, the ability of forests to provide shade, and draw water out of the ground and transpire it through their leaves. This has both a cooling effect, similar to sweating, and humidifies the air to create clouds which reflect incoming solar energy back into space. Trees also release organic chemicals which react with other chemicals in the atmosphere to cool the air. The biophysical cooling effects are particularly important near forests where they can protect an area’s agriculture and reduce city heatwaves. As more and more trees are cut down and forests are turned into grasslands, protecting forests is not just good for global warming, it also produces immediate benefits for local communities and their economies.

China using the law to protect the environment

James Thornton is an environmental lawyer, an authority on the use of the law to create change. He is also the founder of ClientEarth, a global, not-for-profit law firm that, in their words, shapes the law, enforces the law and increases access to environmental law to tackle environmental destruction and climate change by changing the system. They aim to transform industries and hold governments to account. In this 12 minute TED talk from September 2021, Thornton describes a remarkable experience that began in 2014 when he was invited to Beijing to help the Chinese government design a new legal system  that would allow environmental groups to sue companies for destroying the environment, including government-owned companies. The government accepted almost all Thornton’s recommendations. Since then, Thornton and ClientEarth have trained over 1,500 newly appointed environmental judges, including judges on the highest court in the land. They have also trained over 1,200 Chinese Federal Prosecutors how to prosecute environmental cases. According to Thornton, China wants to become a world leader in environmental legislation. In 2020, over 80,000 environmental cases were prosecuted in China, most of them against government departments.

There are three central questions and challenges in the global response to climate change:

Broadly speaking, we have pretty good answers for the three questions – answers that are certainly good enough to justify action and tell us what should be done. The three challenges are a bit trickier. Through the UNFCCC process over the last 30 years, wealthy developed countries have accepted limited financial and technological responsibility for tackling the mitigation and adaptation challenges. The developed countries have, however, vigorously resisted calls by developing and vulnerable nations to accept much responsibility, especially any legal or financial responsibility, for the loss and damage challenge. No doubt this is because it is clear that most of the unavoidable loss and damage will occur in poor countries, countries that feel aggrieved about the double whammy of having contributed least to the problem and having least resources to respond to the loss and damage that they are already suffering and that will inevitably get worse. Under sustained pressure from countries that are suffering the most loss and damage, the developed countries have in the last year started to pay a little more attention to the financial issue. I emphasise ‘a little’ but we can be sure that it will be firmly on the agenda again at the COP meeting in Cairo later in the year.

Loss and damage can be considered in two cross-cutting ways: the causes and the losses. First, it occurs as result of two sorts of events: extreme weather events and slow-onset changes such as sea level rise, ocean acidification, land degradation and glacial retreat. Second, there are economic losses where belongings, infrastructure or systems are damaged or destroyed with resulting loss of productivity and income, and non-economic losses where cultures and lifestyles are destroyed or communities are forced to move.

Estimates of the cost of loss and damage to developing countries are a bit shaky but are probably in the low hundreds of billions of US dollars per year at present, rising to the high hundreds of billions or even trillions of dollars per year by 2050. This is required to deal with, for instance, crop failures, rebuilding critical infrastructure, humanitarian assistance, cash transfers to poor people when disasters strike, and assistance with migration, relocation and reskilling for those forced to leave their homes.

… but the Financial Times has told me personally that after only three years I have made a ‘roaring start’ and that I am ‘on track to reach net zero’. In that time I reduced the world’s energy-related CO2 emissions by 8.5 per cent by 2025. I also got top marks for tackling methane emissions and won two awards, one for creating jobs and the other for protecting nature. The financial benefits of these successes meant that I recouped three-quarters of what my actions cost. If you think that you can do better, log in to the Financial Times’s Climate Game. Your goal as the Global Minister for Future Generations is to make the best evidence-based policy choices to keep global warming under 1.5 degrees Celsius by cutting energy-related CO2 emissions to net zero by 2050. Good luck. The planet is counting on you.

To inject a note of reality to my amazing success, reducing CO2 emissions by only 8.5 per cent in three years is way below what is needed and is hardly going to save the planet. Maybe the annual reductions will progressively increase during the next time period of the game, 2025-2030.

This is the Quantum E4, an electric vehicle made in a small factory in Bolivia in five days. It has a top speed of 55 kph, a range of 55 km, and can carry two people but is basically made for one. It costs about Aus$8,000. Quantum can make 60 cars a month but is currently selling only about 15 a month. Since start-up a couple of years ago, they have sold 350. The principal purchasers have been students, fellow entrepreneurs and cost and/or environment conscious businesses. The main competition globally for small, cheap EVs like the E4 comes from China, of course. 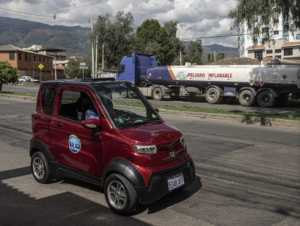 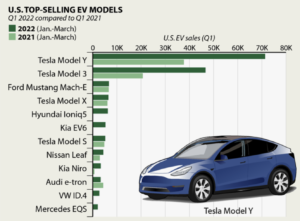