Environment: nobody wants to pay for climate action 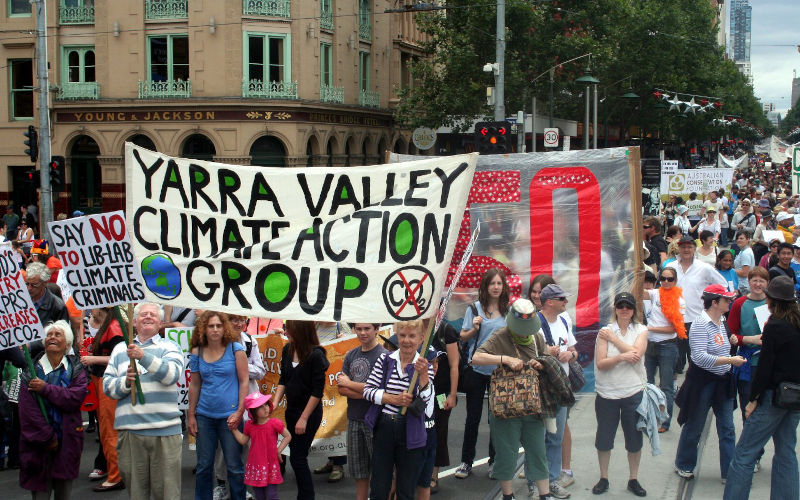 The Commonwealth government continues to ignore climate action, while developing countries resist bearing the burden of the renewable energy transition. Scientists say ‘no’ to solar geoengineering.

The Sydney Morning Herald’s analysis (30 March 2022) of the budget from an environmental perspective paints a grim picture:

In a rather more detailed analysis, the Institute for Energy Economics and Financial Analysis (IEEFA) concludes the budget allocations show a strong focus on gas, carbon capture, utilisation and storage (CCUS), and blue hydrogen, “all of which add to Australia’s and global emissions, not reduces them”. The CCUS scheme in the Pilbara will pump CO2 into oil and gas wells to produce more oil and gas, while blue hydrogen is produced from natural gas and produces more greenhouse gas emissions than simply burning the gas. Spending to tackle climate warming will decrease from $2 billion in 2021/22 to $1.3 billion in 2025/26.

The public may say that the environment is one of their top priorities leading into the May election but the government clearly doesn’t believe them or agree with David Ritter, CEO of Greenpeace Australia, commenting on the recent IPCC report:

“We have both the terror and the extraordinary privilege of living in this most critical decade, when our actions will ring down through the centuries to come, as our efforts to fight climate change decide our fate, the fates of our neighbours and of millions yet unborn, as well as that of every ecosystem on the planet.”

Developing countries mostly have some combination of the following characteristics:

So it’s hardly surprising that some developing countries (e.g. Nigeria, Ghana, Equatorial Guinea, Guyana, Malaysia) have been pushing back on the drive to transition the world to renewable energy, arguing that such pressures are unfair and detrimental to their economic development and that they should be left out of the global clean energy transition:

“We are still in transition from firewood to gas. Please allow us to continue with our transition.”

“They want all of us, including those of us without food, to carry the burden of transition.”

Future generations experiencing three or more degrees of global warming will look back in astonishment that the rich of the world not only let, but encouraged and funded, developing nations to build and operate coal and gas fired power plants. “It would have been more responsible, better for all and cheaper”, they’ll say, “for the rich to have done everything in their power to ensure that developing nations skipped that dirty 19th century technology altogether. And they should have compensated nations with fossil fuels beneath their feet for not developing those reserves. Why were our wealthy ancestors so selfish and short-sighted?” Why indeed?

Wealthy nations have struggled to raise the, frankly miserly, US$100 billion dollars a year they promised to help developing nations mitigate and adapt to climate change. How difficult is it going to be to get North America, Europe and the Middle East to pay poor countries with fossil fuel resources to leave their treasures in the ground?

Of course, those are the ‘idealistic’ arguments. It’s also an uncomfortable fact that in some developing nations the development of their natural resources does not lead to much improvement in the lives of the country’s poorest people. Rather, the rights, livelihoods and local environments of affected communities, and the experiences of the nation’s poor people generally, often deteriorate, as the profits are syphoned off by multinational corporations, oligarchs and corrupt politicians and officials. This situation is dubbed the ‘resource curse’, although it would be more accurate to point the finger at the perpetrators than the physical entity and call it the ‘greed and exploitation curse’.

Solar geoengineering – a range of technologies aimed at blocking some of the incoming radiation from the sun – is being promoted in some quarters as a last ditch effort to halt global warming. This is despite very serious concerns about its uncertain effects on weather patterns and, among other things, agriculture. Even more concerning are the unknown risks if solar engineering technologies are ever deployed widely and, equally concerning, should they ever be stopped. The impossibility of implementing an effective and just global governance system for research, trials, implementation, etc. adds yet another danger. On top of which, we have perfectly safe options for limiting global warming that are ready to be rolled out now.

A coalition of scientists and governance scholars has called for an International Non-Use Agreement on Solar Engineering which would commit governments to:

How to reduce oil consumption

You couldn’t give oil away a year ago. Then the price picked up and more recently the Russians (the world’s largest oil exporters) decided to start bombing Ukraine. The result is that the price of oil has hit US$150 a barrel and it’s not just Australian householders and car owners who have noticed. On top of all that, the USA, Canada and UK, and probably more, in retaliation for Russia’s unneighbourly behaviour, are banning the import of Russian oil. No surprise then that governments are worried about a shortage of oil and consumers are worried about the price. The International Energy Agency has formulated a 10-point plan (see figure below) for advanced economies that would, if fully implemented (a very big ‘if’) cut their demand for oil by 2.7 million barrels a day in the next four months. That would constitute about a 5 per cent reduction in their normal demand. The big reductions would come from reduced highway speed limits, car-free Sundays in cities, working from home for three days a week, public transport, walking and cycling, and car sharing. 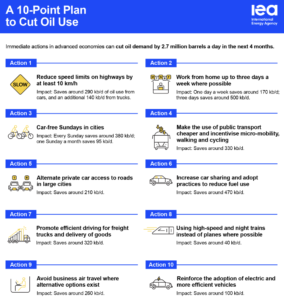 Texas: best at everything

Talking oil, there I was a few weeks ago lauding Texas for its front-of-the-pack performance at installing renewable energy in the USA. Now it turns out they were also the leaders at generating electricity from coal in both 2020 and 2021, with a big jump between the two years. Just like China, Texas seems to be a leader in both methods of generating electricity. 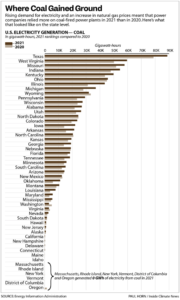